Boon or Bane: The Debate on AI 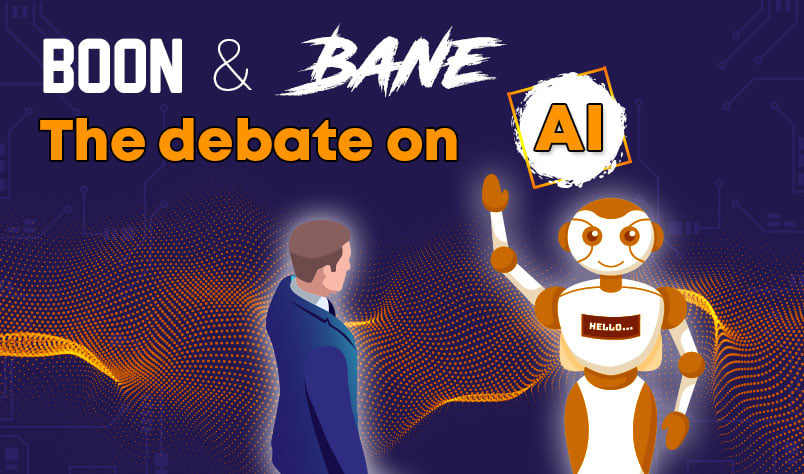 Trust in AI: A Systemic Approach

Artificial Intelligence (AI) is the foremost robust technology of the 21st century, serving to unravel humanity’s several complicated issues such as environmental or social, and many more.  Nevertheless people have a belief that AI based challenges are as giant as its advantages. Artificial Intelligence is basically the heart of the upcoming future of technology. And chatbot services are the nerve of customer support solutions. There has hardly been any technology which is as robust as AI. It is for the very first time that our intelligence has been challenged by robots and thus our role on this planet.

As far as interactionis concerned, Trust is the most crucial and essential influencing factor.Now-a-days, customers are taking life-or-death decisions by relying on AI.Healthcare is one promising domain of AI.
In a nutshell, trust happens to bethat mechanism which address and unravel complications.
What makes the topic oftrust within the AI context thus appealing and theway is it distinguished from alternative innovations?

Now, what makes thematter of trust in the context of AI so appealing and what can be done toovercome this issue for the welfare of mankind?

AI as a Menace or Marvel for Mankind

We have come to a tipping point of alatest ‘digital divide’. AI will definitely forecast theupcoming future. Various police forces are utilizing it tooutline the time and venue of crime is probably going to takeplace. Doctors may utilize it to forecast once a patientis about to suffer an attack or stroke.
According to recent surveys, people arenot counting on AI and are relying onhuman consultants for trust, whether ornot these consultants may be wrong.

Moving ahead, transparency from varioustechnology firms and also the AI systems whichthey design are going to be the primary key in unraveling anykind of concerns, advantages in terms of performancealone won’t provide trust of AI. Yes, most of us think that digitalpersonal assistants like Siri and Google currentlyare useful when we need to search out a building orplay a song, however it doesn’t implies that AI istotally trusted. As customers uses AI and becomes familiarwith it, the vigilance and requirement for transparency canrise, too, however one question pops up: how can we really create thesesystems transparent?

When we are talking about AI, there exists several reasons, that why trust is now a very famous research topic. Its impact will continue over business as well as economic behavior, if customers utilize digital assistants such as Alexa for their regular activities.

So, Can humans trust Dr. Robot?

If we need to trust AI, it’s our responsibility to get educated aboutthe advancement and the terminology of AI, whereas technology basedorganizations have to be responsible and guarantee they are transparentregarding the AI systems which they design and what they may perform. For aninstance, is a facial-recognition system seeking to check a person’s identityor is it even scrutinizing and decoding facial reactions?

China is aiming to become a world leader in AI by 2030. Recently China based news agency Xinhua has introduced its first female AI news reader which is indicating a straight threat to human news readers in the coming future. Technically, an AI system has been activated to combine the reader’s voice, expressions and lip movements. This is pretty much different from utilizing a ‘3D digital model of human’. Humans are getting confused between the artificial news anchor and real ones which gives rise to the dilemma due to the Uncanny Valley effect.

Developers carry a pivotal role to play in designing and deployingreliable AI systems. They have to be developed such that they operate accordingto the values of audience as well as society of which they will be part of,with a purpose to be accepted. Although how?

While designing latest applications, developers must question theobjectives behind them. For an instance, they should think that can it transformpeoples’ lives in a better way? With this kind of mindset, developers can startintroducing with accurate set of applications.

For example, WatsonOpenScale allows industries to be confident about the decisions that AI ismaking, as they are fair and even understood. Watson OpenScale assists inunravelling AI’s black box issue by offering insights into AI, suggesting somesteps to enhance results, and organizing tasks to rectify problems about performance, precision, and fairness.It offers the business with clarity, managementand the capability to enhance AI deployments.

For taking its customers nearer to the AI destinations, IBM have introduced ‘IBM Cloud Private’, which is an integrated data technology, data engineering as well as app-building interface constructed to assist industries uncover various hidden insights from the data. The respective platform is even built to allow customers to create and utilize event-based applications which are able of scrutinizing the data from Internet of Things (IoT) sensors, web commerce, mobile devices and many more.

The organization requires to address such challenges if we all have torelish the value and advantages which AI can introduce.

The road to the destinations of AI has become a reality for several industries who are speculating into it, not just to assist them earn competitive benefit, however even to evolve as the truly subjective organizations of upcoming future. It is similar to the case of people, trust in Artificial Intelligence systems can be earned only with time. Although, this doesn’t implies that time solely will unravel the crisis of trust in AI. We, as potential and patient users, also have to play our role as helping hands along with the effort of numerous industries.

With chatbot taking over the human demeanor of interacting with the customers at any time of the day, NLP aiding in real-time speech recognition and intent analysis of conversation management; AI is steadily growing its impactful roots all realms of industrial operations.

AI has the power to develop content over a hyper-personalized level and can make songs, various shows, and many more which don’t yet even exist. The endgame for Artificial Intelligence in the field of entertainment can be the development of completely latest content which is designed for a broad set of customers. AI will even develop remarkable music as well as poetry, and therefore, it won’t be much longer when the technology of AI combined with computer–based animation as well as visual effects can develop and provide real-time storylines.