How is AI Breaking Into The World Of Weaponization? 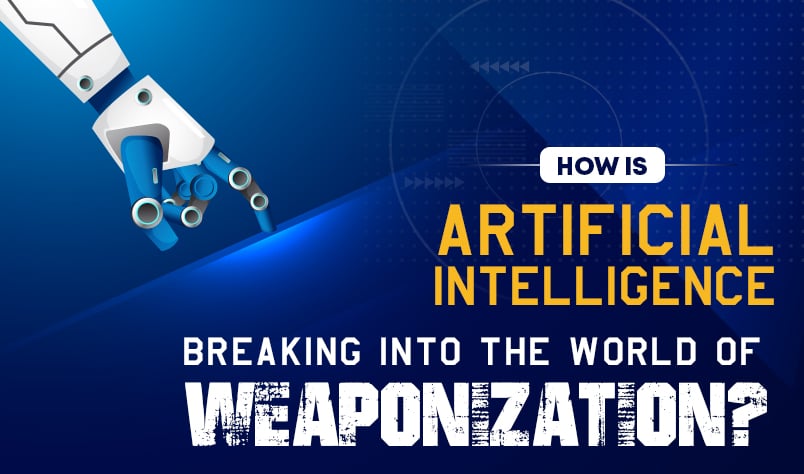 Can machines be allowed to take decisions about life and death?

The advancement of technology has now become some kind of a rat race. In this competition to lead the evolving technological race on the futuristic warfare battleground, the concept of artificial intelligence (AI) is quickly becoming the core of worldwide power plays.

It has been noticed across several countries that the growth in autonomous weapons systems (AWS) is advancing quickly, and this rise in the technology of artificial intelligence has become an extremely important development. It introduces complicated security-driven challenges not just for the nation but also for humanity.

The concept of machine intelligence or an intelligent machine or the capability to carry out any warfare challenge without any kind of human intelligence and intervention, utilizing solely the connection of its implanted sensors, algorithms  and computer programming within the human ecosystem, has now become a reality which can’t be overlooked anymore.

One of the major promises of Artificial Intelligence within the military sector which seems to ensure its acceptance is its extensive applicability. AI will be utilized to enhance productiveness and proficiency and not only to combat challenges. AI will enhance supply lines, improve the training of newly hired soldiers and raise the level of intelligence processing.

From a military standpoint, there are various reasons why there exists huge interest in autonomous weapons.

As countries independently and collaboratively speed up their efforts to achieve a competitive benefit within science and technology, the weaponization of Artificial Intelligence is inescapable. AI Weaponization is not just limited to warfare but cybersecurity as well.

Russia is reported to be working on AI-driven missiles which can decide to switch targets mid-flight. A survey by state Russian media has claimed that potential military usage of Artificial Intelligence rose in the year of 2017. Russia has even been testing numerous autonomous as well as semi-autonomous combat systems, like ‘Kalashnikov’s “neural net” combat module’, with a camera, machine gun, and Artificial Intelligence where it can take its own targeting decisions without human intelligence.

Chinese military forces have reported that their objective is to consolidate commercial Artificial Intelligence technology to limit the bridge between the Chinese military and worldwide higher powers. China generally sources confidential evolving technology like drones along with artificial intelligence from private newly-established enterprises.

China’s recent reports in Artificial Intelligence that entail autonomous cooperative behavior amongst various distributed robots are the talk of the town in the media industry.

United States of America has numerous military-based AI combat programs, like the Sea Hunter autonomous warship that was created to function for expanded periods at sea without any human intervention of a crew member.

Germany utilizes the Patriot and MANTIS air-defense systems. Technically, they are operated to the degree such that they target and shoot down all enemy missiles. In reality, there exists not a single person who sits there or presses those buttons for destroying any kind of incoming missile.

In the year 2015, the UK government has opposed the ban on those autonomous weapons, reporting that “international humanitarian law offers required regulation for this area”, however all the weapons adopted by UK armed forces are going to be “under human oversight and control”.

Israel’s Harpy anti-radar “fire and forget” drone is constructed to be launch-able by various ground troops, and it flies automatically to discover and destroy the targeted radar which matches pre-defined criteria.

It will discover, track, and even destroy a target in motion with a range of 4 km. This particular technology will function without any human intelligence. Israel’s Iron Dome air-defense system can detect and even destroy any incoming rockets automatically.

A South Korean official claimed that their weapons do not sleep, the way humans do. They will see in the dark as well, which humans cannot. AI technology hence crosses the gaps in human capability. South Korea utilizes autonomous weapons to detect movements near the North Korean border.

Make no mistake, the whole world is in the middle of a heavily critical revolution, a drift towards the age of artificial intelligence. And while the progress from every year to year might look like small, when we will look back ten or twenty years from now with the benefit of hindsight, all these progressive moments will be a milestone regarding how our futuristic world has evolved.

Utilizing Artificial Intelligence in various systems regarding these platforms, AI has contributed in the advancement of productive warfare systems that are less reliant on human input. It has even led to enhanced synergy and improved performance of warfare systems which need low maintenance. Artificial Intelligence is even anticipated to empower autonomous and advanced weapons to perform synergetic attacks.

How do you feel about weaponized Artificial Intelligence? Drop your thoughts below!

I simply wanted to write down a quick word to say thanks to you for that wonderful information you are showing on this site.
artificial intelligence software development company