The Race is On: Artificial Intelligence versus Hackers 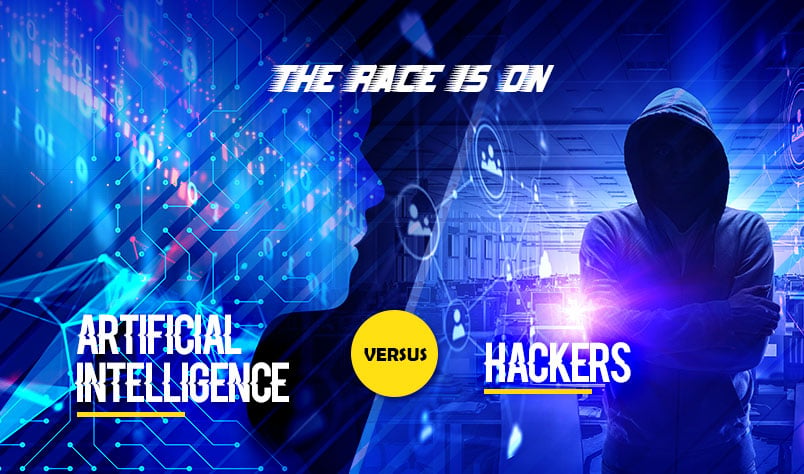 “AI is a dual-use technology that can be deployed defensively or offensively,”. “There are malicious uses of AI.”

“Artificial Intelligence, for all its overwhelming capabilities, is a double-edged sword”

AI is substantially about systems which demonstrate intelligent behavior by scrutinizing their ecosystem.

They perform varied tasks with a high grade of autonomy to accomplish special goals. Artificial Intelligence is suitable to unravel a number of issues plaguing the IT sector, and cyber-security definitely falls into that classification.

With today’s dynamical cyber-attacks and expansion of handheld devices formidable computational machines, Machine Learning and Artificial Intelligence will be utilized to “keep up with the hackers”, automating threat detection and address flaws successfully in comparison to primitive software-oriented approaches.

This unveils a powerful need related to Machine Learning for cyber security, along with a caution: Artificial Intelligence utilized for attacks are superior at exploiting insecurities within AI defense systems, in comparison to humans. This suggests some extraordinary emphasis has to be placed on amalgamating Human Intelligence with for cybersecurity.

AI: The Floodgates for Cybercrime

Cybercrime is essentially a business which utilizes complicated technology, consisting of AI, for automating profit-making. Criminals will utilize AI to engineer machine-driven phishing attacks are with highly convincing content and even higher precision of targeting. Various Machine Learning algorithms can enhance security solutions, facilitating human analysts prioritize threats and shut down susceptibilities faster. Cybercrime associations are exploiting this so as to blackmail cloud-based corporations as well as individual users into paying a huge amount of ransom.

The primal fear that Artificial Intelligence can introduce brand new types of cyber breaches which bypass primitive means of counteracting attacks. From a defensive perspective, cyber-security experts already utilize an excellent deal of automation as well as machine-powered analysis. Nevertheless, the exploitation of vulnerabilities on the rise. Hackers are basically on the brink of building a wave of Artificial Intelligence attacks.

Reports have said that “Vicious utilization of Artificial Intelligence might threaten digital security, physical security, and political security”. Organizations have also reported that, “The misuse of AI will influence how we design and maintain our digital framework and how we construct AI systems, and may need policy and other institutional responses.”

In a nutshell, developments in Artificial Intelligence have made it far easier for cybercriminals to violate systems and steal information. Given that Artificial Intelligence is growing at a fast rate, this is actually a cause for concern. Cybercriminals are well-known to challenge the newest technologies in fields like AI. They’re doing this to carry out attacks that are very robust and undetectable. In addition to this, the impact that AI has over the physical world can lead to some extraordinarily horrifying results.

Hackers can even be utilizing AI to empower their attack abilities. Forinstance, AI can be utilized to collect data for “spear phishing” campaigns,essentially where people are targeted with extremely customized fake emails.

How Artificial Intelligence will compete with Modern Hackers and Cybercrime?

“Hackers have been exploiting AI as a weapon,” opined Brian Wallace of Cylance. It makes a lot of sense several hackers have an issue of scale, attempting to attack many targets and attempting to scale back risks to themselves. Artificial Intelligence and Machine Learning are ideal tools to be utilized for that purpose. Such tools, he continues,will take decisions regardingwhat to attack,whoto attack andeven whento attack.

Artificial Intelligence can use hackers’ tools againsthackers themselves. However, whereas Machine Learning might assist inscrutinizing customer behavior to enhance suitable security settings, it’spretty significant to design AI security into systems from the beginning. Bydoing this, IT experts ought to utilize both security based technologies alongwith the significant human component in keeping the systems entirely safe andsecure.

Monitor Usage and stay Alert for confidential info within the Cloud:

Covering several IT and AI tools which monitor servers as well as network utilization, various cloud platforms provide threat monitoring abilities which can mitigate the riskof vicious utilization of resources. IT experts and professionals ought to pertain cloud security as a component of cyber security awareness in the training offered to cyber security employees.

Selecting a safe solution which allows customers to notify any security based lapses is important. Also, in case they are compromised, the runtime monitor assures that the hacker or brute force attacker cannot reach their information.

Ultimately, Machine Learning will carry out tasks like executing customer-application interactions, restricting the ‘window of opportunity’ for various cyber criminals. And, when the IT industry becomes extra vigilant of systems and attain expertise in monitoring them, it will become impossible for criminals to breach them.

The brave new world (as Aldous Huxley put it in his seminal work) of Artificial Intelligence-oriented hacking awaits, with numerous criminals attempting to target susceptible customers as well as systems. Several security companies can likewise depend on Artificial Intelligence to stay secure. Ultimately, such tools can evade human comprehension and management, operating at lightning-quick speeds in an evolving digital scheme. It might reach the extent that hackers and Artificial Intelligence scientists will have no choice but to press the “go” button in their concerned systems, and just expect the best to happen.

A bright future ahead for AI in cyber security

Fortunately, various security experts and professionalshave an influential and evidential antidote at their disposal: ArtificialIntelligence itself! The problem is, this is surely going to be a race orcompetition between the rival camps. Both the sides actually have no choice, asthe sole way to oppose the other is to heavily depend on artificially intelligentsystems. Bad guys or hackers (with the help of AI) will keep on using thesimilar attack vectors as they are doing today, just in an extra-effective way,and thus the Artificial Intelligence driven defense mechanisms which haverecently been developed will be utilized against malicious AI driven attacks!