AI in Smart Cities: Making All the Difference in the World 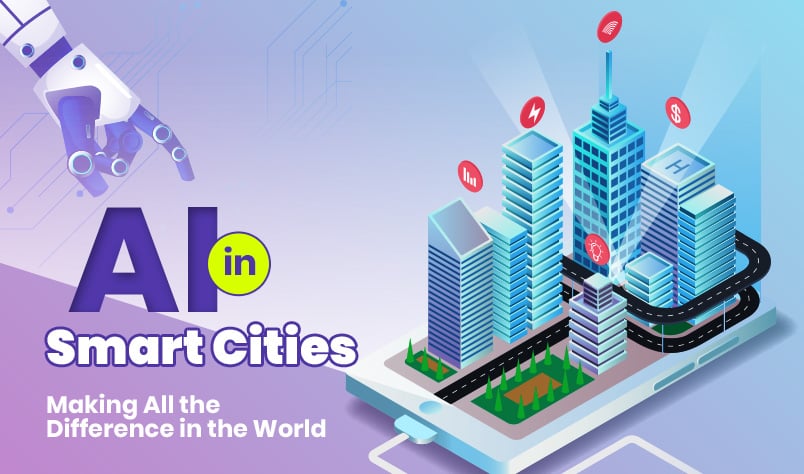 Our world is moving to an age where cities are considering some spectacular strategies to get transformed into Smart Cities. This transformation is becoming existent, and thanks to the facilitation of IoT, governments can collect some real time data and amalgamate it with the features of artificial Intelligence.

Building smart cities is presently the need of the hour as population is rising rapidly and more people are becoming highly urbanized. The primary step for any city towards being a “smart city” is gathering additional and useful data.

At the present, smart city plans are utilizing the applications of Artificial Intelligence which entail enhancements of traffic as well as parking management. Upcoming programs will consist of safe amalgamation of autonomous self-driving vehicles.

Our world is moving towards an AI-driven revolution, providing us the suitable tools as well as technologies and proficiency to fulfill all the challenges with some intelligent and quick-reactive applications.

Artificial Intelligence in India has also enabled a transforming turn to revamp its cities into Smart cities.

So, basically what is the ultimate concept behind the “smart” cities project? There is no particular definition for it. It actually relies on the notions that how much developed a country is. Thus, in that context, the building blocks are:

How we can say a city is Smart?

Welcome to the City of Artificial Intelligence

It is the convergence of various technology-driven advancements which is assisting in quickening the development as well as governance of such smart cities.

The idea of traffic flow not just reduces the driving time but is even having an economic influence in the world. A traffic flow as well as traffic sensor system provided with Artificial Intelligence will eliminate the problem of traffic. But how? The AI-driven traffic cameras will gather real time data of vehicles and then transmit it to the respective control center that assembles the information and operates the signal timings to assure easy flow of traffic. Cab services such as Uber and Ola are even utilizing Artificial Intelligence-oriented algorithms to provide a suitable travelling experience to its users.

Artificial Intelligence will enhance parking management within cities by offering data about the existence or inexistence of various parking sites. It may provide this by gathering data from the drivers’ mobile phones along with various sensors which are embedded inside the ground. When Artificial Intelligence has collected the concerned data, it will operate it for offering actionable glimpses and real-time based parking maps.

An instance of smart parking allowed by Artificial Intelligence is the utilization of ‘AI-driven model and predictive modeling by Redwood City in California’. This technology is assisting authorities to create highly effective parking by enabling sensors to recognize patterns of parking areas.

With Artificial Intelligence operating in amalgamation with the government, it has become somewhat simpler for various city authorities to check respective waste levels. Furthermore to this, Artificial Intelligence will assist in enhancing the process of waste management within various cities by offering some urban planners as well as authorities with functional and route optimization analytics.

Various cities have decided to switch to the utilization of “smart grids” to provide power to the public. Smart Grid has a concept of a central management center to manage all the units and assure they work at greatest efficiency. This facilitates in decreasing the electrical consumption and leads to substantial economic benefit.

Artificial Intelligence based chatbots are the ultimate solution to various government information offices. Chatbots basically try to mimic human conversation over a chat. People may communicate with government representatives via that bot to get suitable information that will highly decrease response time.

Click to know more about Chatbots and their role in Artificial Intelligence.

People must be aware of China using facial recognition as well as video surveillance and AI-driven techniques, where various police officers in Zhengzhou are utilizing some smart glasses to identify suspicious criminal suspects and arrest people with some fake IDs.

They are using a camera that is based on the technology of Artificial Intelligence which will source the person’s name along with contact information as well as contact authorities.

Presently, we might keep huge data across a network of servers which can be referred as “cloud” and even execute AI algorithms over the data without the need to download it. Such artificial intelligence based procedures will be utilized to map the utilization of land over time to create useful insights. For an example, by running an algorithm for various satellite images or city planning as well as development will be planned relying over dynamic data, sites prone to disasters such as flooding will be recognized accordingly. The data will consistently be observed to allow suitable governance and create a citizen-friendly world.

The upcoming vision for creating smarter cities belongs to several spheres like Self-driving cars, traffic control, and smart highways as well as parking garages. The entire system is aimed at functioning together to shift citizens to a high level of safety. Health and economic development also falls in the category for smart city projects. In the current era, various researchers are estimating using raw statistics about how citizens are travelling on various roads and paths, although in the coming future they might have the access to all the futuristic facilities they are seeking today from their cities.