Is Our World All Set For Self Driving Cars? 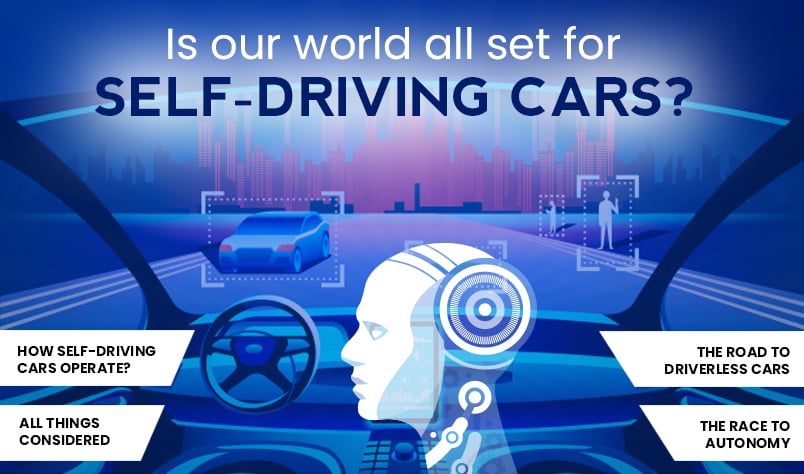 In the last few years, the concept of autonomous driving has reached from “slightly possible” to “definitely possible” and finally to “inevitable”.

A self-driving car utilizes a union of sensors, radar, cameras and technology of artificial intelligence (AI) to drive between destinations without any kind of human assistance. If any vehicle has to be completely autonomous, that vehicle should be ready to navigate without any human intervention to a pre-decided destination.

Artificial Intelligence (or AI) provides cars the power to see, think, grasp and even navigate. By the year 2020, it has been estimated that about 10 million self-driving cars will be moving over the road. Human based errors have resulted in approximately 81 percent of car crashes and consumer safety has always been the prime concern. Becoming semi-autonomous will also mean a safer ride for consumers.

On the contrary, substituting a driver will provide a safer ride, however robots will never be able to take decisions as humans do. There are vulnerable chances that various hackers out there can attack and misuse car’s piloting system. If we are choosing the route of self-driving cars, it will need a critical balance.

The ultimate objective of self-driving industries is to make driving safer. A completely autonomous driverless vehicle must be ready for the following factors which a human driver does, such as:

According to reports, self-driving vehicles are able to address two types of errors. Issues of recognition will be diminished by utilizing sensors, cameras, radar, Lidar (which is a remote sensing system) along with other tools. The cars will notice 3D positioning of objects, get 360-degree camera views in super high resolution and access various relevant information like velocities of objects.

Artificial Intelligence technologies are empowering the innovation of self-driving car systems. Manufacturers of these self-driving cars utilize huge volumes of information from image recognition systems, as well as machine learning along with neural networks, to create systems which will drive autonomously.

The neural networks recognize patterns within the data that is provided to the machine learning algorithms. That concerned set of data entails images from given cameras in the self-driving cars and from where the neural network recognizes traffic lights, curbs, trees, street signs and pedestrians.

The road to driverless cars

Last December 2018, Waymo came into existence from Google’s self-driving-car project. And this is just the beginning. Waymo will enlarge the service’s ability and availability with time. This application of artificial intelligence is still under the cover and not yet emerged in India. Artificial Intelligence in India is soon to knock the door of innovation!

Perception is the toughest section of the self-driving challenge, and the workforces functioning on autonomy have three prime tools to do it: lidar, radar and cameras.

There have been many controversies which came into discussions about these self-driving cars.

This issue was brought up in a fatal accident which occurred in March 2018, which entailed an autonomous car operated by Uber. The enterprise has claimed that the particular vehicle’s software did recognize a pedestrian; however it considered it a false alarm and failed to deviate to avoid hitting the pedestrian. This particular crash led Toyota to stop its testing of various other self-driving cars over public roads temporarily.

This is actually what the entire self-driving car group has feared all along! The first death which is affiliated with an autonomous vehicle. After this incident regarding self-driving Uber which killed a woman in Tempe, Arizona, we are now left with a question: is our world really ready for this kind of tech?

A recent study from the Georgia Institute of Technology has reported that autonomous driving systems might have high complexity in identifying walkers with dark skin in comparison to those with light skin. The Georgia Technical team’s research claims that we are possibly on a track to a future where our world with autonomous cars is not going to be safe for folks with dark skin complexions as compared to lighter-skinned walkers. The researchers scrutinized how efficient image-detection systems are at detecting light-skinned as well as dark-skinned pedestrians. On an average, the image-detection systems are approximately 5% less precise at identifying dark-skinned pedestrians.

The Race to Autonomy

When folks think about the self-driving cars, the image which generally comes to their mind is a completely autonomous vehicle without any human intervention. The reality, though, is highly complicated.

Autonomous driving is actually about amalgamating a robotic driver with an electric car. Within the self-driving vehicle’s machine exist robust systems and graphics processing units performing deep learning to analyze all the data to conclude such things like if the object in front is a person, or another car, or a fire hydrant and many more.

Robot-driven cars will not precisely mitigate human behavior and in fact the actual issue arises when the interaction between humans and those robot vehicles occurs.

The autonomous machines have to make immediate decisions regarding when to slow down, deflect or carry-on acceleration in a normal way. This is a huge never ending challenge for manufacturers and reports have been made about self-driving cars hesitating and deflecting needlessly at the time objects are detected in the roadways. The concept of Artificial Intelligence for self-driving cars is outstanding at making decisions, however, it still doesn’t have the potential to reduce or bring out a logical conclusion, which a human driver can do!