Rise of AI: 25 Top Brands Which Are Implementing AI 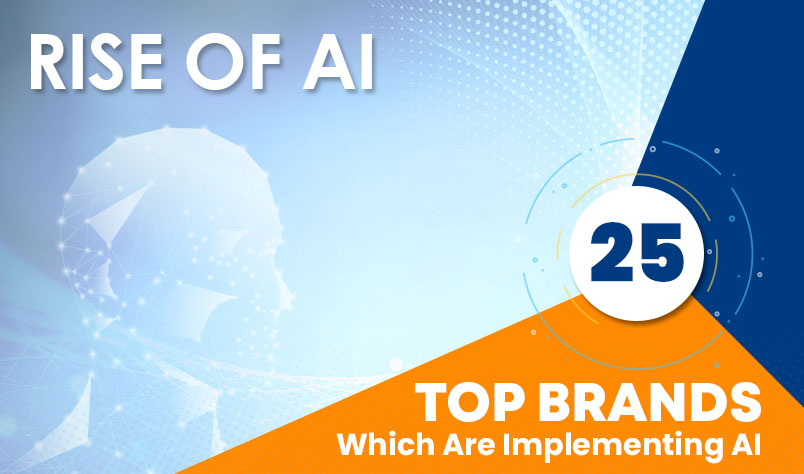 “Artificial Intelligence will have a huge economic impact but also change society, and it’s hard to make strong predictions, but clearly job markets will be affected,”

said Yoshua Bengio, a professor at the University of Montreal, and head of the Montreal Institute for Learning Algorithms.

Artificial intelligence has truly transformed the wayindustries function. Enterprises in all the sectors are adaptingto AI-driven tools and strategies to revamp their businesses. From Amazonand Google to Microsoft and Apple, all the tech-giants are investing inArtificial Intelligence and taking a new turn in their business.

The following 25 major companies are playing a pivotalrole in framing the future of artificial intelligence and its abilities. The mostnoteworthy organizations who have invested substantially in ArtificialIntelligence are featured in this list.

Netflix, a streaming service, utilizes artificial intelligence to create various variations of high-probability ‘click-thru image’ thumbnails to enhance the possibility which customers will click and then watch. Netflix utilizes AI to offer personalized recommendations to their customers. It utilizes the technology of AI for Auto-Generation and Personalization of Thumbnails / Artwork, Location Scouting for Movie Production (Pre-Production), Movie Editing (Post-Production) and in pre-selecting Streaming Quality.

Sephora, a cosmetics store, possesses an AI chatbot offering all kinds of beauty tips and begins with a quiz regarding customer product preferences. It has:

Starbucks is a premier retailer of specialtycoffee, and now, via itsStarbucks mobile application, enables consumers to make an order via voicecommand or messaging to a virtual barista utilizing Artificial Intelligence algorithms. AI comes into thepicture when Starbucks scans their saved drinks and order history andamalgamates it with a heap of various factors: their home city, their favoritetime of day to order, and even the weather atthe time they order!

Google, who is a bona fide leader in ArtificialIntelligence, utilizes the technology of AI and machine learning in several areas.

Under Armour, which is an American sportswear company,has an app which tracks and determines consumer workouts and providescustomized training and nutritional suggestions.

Apple utilizes deep learning fordetecting any frauds on Apple store and even for face detection in iOS10onwards. It utilizes neural engines for the purpose of face recognition forunlocking the device and transferring facial expressions to animated Animojiand Memoji.

Artificial Intelligence in fact letsApple scan faces and locations in pictures and recognize them. Apple is evencreating a self-driving system which can be executed in existing cars. Apple’sSiri is a virtual assistant which communicates nearly flawlessly.

Disney utilizes artificialintelligence to arrange products and stock units. It is also trainingartificial neural networks to imitate human brains and then recognize theprocess for making a story interesting.

Spotify, the biggest music streamingservice in the world, utilizes AI as well as deep learning to offer suggestionsfor similar music based on the customers’ previous experience.

The famous denim store hasintroduced Levi’s virtual stylist, that assists consumers determine the idealfitting pair of jeans according to the customer’s preferences.

Skype is a telecommunications application which focuses onoffering video chat and voice calls between devices and utilizes artificialintelligence for photo effects such as face stickers, filters and captions. Italso utilizes AI for voice recognition as well as real-time translation.

Volkswagen has utilized AI-based algorithms for all its media relatedstrategies. It even utilizes AI for predictive analytics to predict ad spenddecisions. With AI, it sold several more cars than with its media agency basedrecommendations.

JP Morgan Chase has recently made an investment in ArtificialIntelligence to get help in automatically generating training content forworkforces. It uses AI for making good utilizationof the rising volumes of information. This technology will facilitate majorbanks save money along with time while building educational content for itsemployees.

Philips is utilizing artificial intelligencetechnologies to facilitate in the early detection of diseases. It provides solutions which adapt topeople’s requirements and expands their abilities, supporting healthcareproviders and clinicians who devote extra time analyzing their data and usingit in a clinical setting, and supporting customers to have healthy lifestyles.

Panasonic is using artificial intelligence (AI) technology which will support people in a variety of fields. An instance of this is “Pedestrian Detection Technology supported by Deep Learning,” that targets facilitating the human eye by using Panasonic’s expertise in imaging technology. Panasonic is using AI that automatically detects patterns in large amounts of information and then identifies and classifies them, to deliver High-Precision Pedestrian Detection Technology.

Intel’s Artificial Intelligence serves well in ensuringthat all the data scientists, developers as well as practitioners get theaccess to an ideal platform and simplest starting point to unravel the AIissue. In 2017, Intel created high achievement targets across the organizationfor implementing AI.

Thefamous e-commerce portal for cosmetics has a virtual mirror for most of itsitems to assist its customers try the products before they buy.

The Artificial Intelligence which cropsuser’s Twitter photos is becoming smarter. This feature has been rolled outto all Twitter users, and its objective is to put an end to weirdly croppedthumbnails. Twitter also utilizes AI to analyze which tweet recommendationsshould be suggested over users’ timelines with an aim of focusing the idealtweets for every user. This social media platform even deployed AI forfighting inaccurate and racist content across its platform.

LensKart have launched aVirtual Mirror for Eye Gear which is one of the most common applicationsof Artificial Intelligence in India. The New Delhi-based enterprise has recently introduceda Virtual Mirror for shopping online for eyewear. It is the first e-commerceportal which allows the customer to try before they buy.

Cyfuture keeps levelwith AI as it hurtles along the path to becoming ubiquitous!