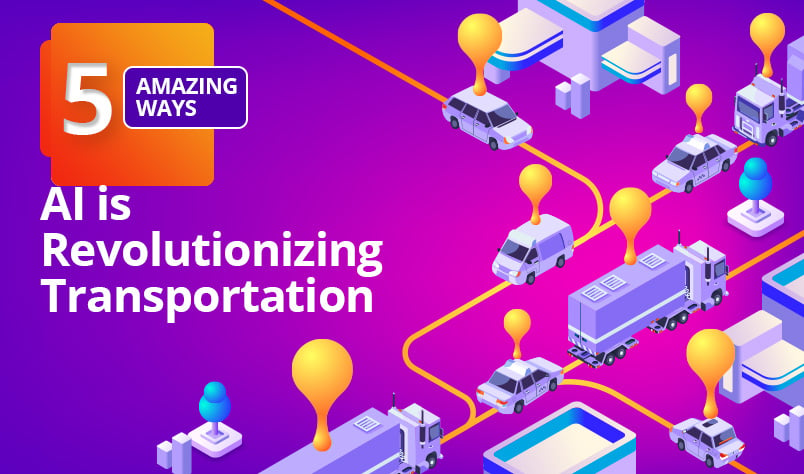 At the present time, I guess nobody is unaware of artificial intelligence, as this tech has become very much a part of our daily life. Smartphones are a vivid example.

It has been a while since I have been writing about artificial intelligence, and just when I think nothing is left to cover with regard to AI, then something new comes up and leaves me in awe.

This time I came to know about how much applications of artificial intelligence are involved in the transformation process of the transportation industry… Jeez! Massive breakthroughs are being recorded every passing week and month, owing to AI.

I have rounded up some ways AI is reshaping the face of transportation, so pay heed to the following pointers:

There is not much time left when we will see autonomous cars come into reality from the realm of sci-fi. Hollywood flicks like ‘Total Recall (2012)’ have shown what the future is going to be like when avant-garde technology is applied in full swing.

Driverless cars are a dream of automobile lovers, which is about to come true really soon. Corporations like Waymo, Tesla, etc. are investing a big chunk of money to bring autonomous cars to the market so that their customers don’t have to wait any longer.

Developed countries like the USA have always been known for their cleanliness. Self-driving trucks are just going to make things better as tasks like plowing snow, collecting garbage, etc. will be done without the immersion of humans.

The tech used in these trucks can also be employed in freight. If industry reports are anything to go by, self-driving trucks are able to transport 2,000,000 pallets. It is amazing, isn’t it?

Heavy traffic jams have always been the factor that causes annoyance to the transportation business owners. Usually, the brand image of many logistic businesses takes the heat due to traffic-related problems.

Traffic jams are quite common in countries with a high population such as India, China, etc. Now, you can guess how difficult life is for the transportation industry in these countries.

Currently, AI-powered mobile apps like Hound are being used to avoid traffic jams and know the best possible route to a specific journey. But such apps are not one-stop solutions to the problems concerning traffic jams.

That is why countries like Singapore, China, etc. are working on AI-enabled traffic management systems that work in a way that pre-empts problems related to jams.

After being acquainted with self-driving trucks, now you can easily believe that the applications of artificial intelligence can be used to complete other transportation-related tasks, besides public transportation.

According to Oskar Levander, vice-president of marine innovation at Rolls-Royce, remote-controlled cargo ships will be used for commercial use by 2020. Remote-controlled ships? This has definitely caught you by surprise, as have the thoughts of luxury cars, which start coming up when the name of Rolls-Royce is taken.

For the past few years, Rolls-Royce has been consistently working on crewless cargo ships with the aim to launch them by 2020. Once the remote-controlled ships have been introduced, it is highly possible we will witness fully autonomous ships in the near future.

Another fabulous thing that AI is going to make possible is a driverless train. This cannot be taken lightly because a large staff that works at different shifts is required to handle rail operations round-the-clock. Once driverless trains clear all crucial tests and are ready to take passengers safely to set destinations, most of the hassle occurring during the rail operations are likely to vanish.

Another amazing benefit that will come with driverless trains is significant space will be freed up, which is usually reserved for the cabins of drivers, ticket inspectors, or other official staff. And this means automated trains will be able to carry more passengers.

This fact will bring a smile to your face: there is no much waiting you have to do, as trials for driverless trains have already begun.

While going through this write-up, you might have thought if everything is going to be automated, what will be the use of humans? Or AI is replacing humans, or killing jobs indirectly? Well, it is vitally important to understand that AI was never meant to be a threat to humans.

So, if you are impressed with the way AI is revolutionizing transportation or want to tell us some other fascinating examples which I missed mentioning in this write-up, the comment section is where you can share your views with the world.