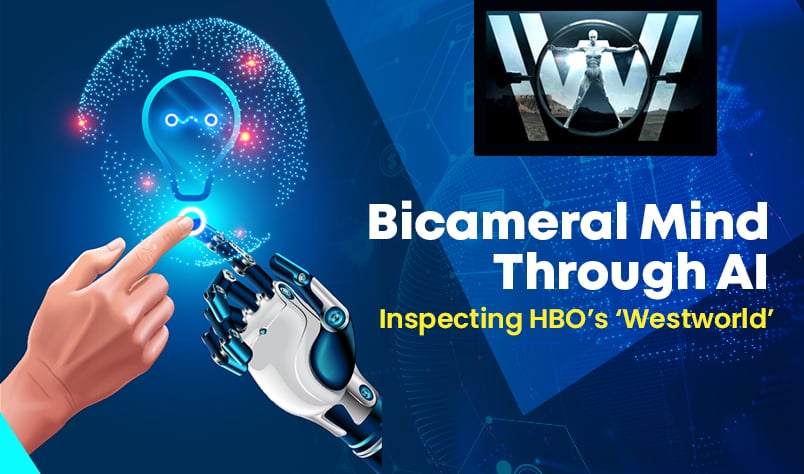 Is it possible to produce consciousness through artificial intelligence?

“These violent delights have violent ends.”

That’s what the entire first season of HBO’s ‘Westworld’ is all about.

Today, when scientists, programmers, and analysts are trying to comprehend and mold machine learning into artificial intelligence, can we conclude that the future has already begun?

If you can’t stop thinking about AI and still haven’t watched the HBO-aired Westworld, you are missing out on something extraordinary, off-beat, and extremely crisp.

I used the adjective ‘extraordinary’ because Westworld doesn’t just speak about applications of artificial intelligence but also about infusing consciousness into AI.

Sounds absurd, right? How can that be?

Even the leading neuroscientists and big-wigs of AI would agree that nothing as such is possible right now.

However, what Westworld has shown is the probability of this happening in the future.

Released in February of the year 2016, Westworld became the most-watched first season of an original HBO show ever.

It is science fiction.

Although the two words ‘science’ and ‘fiction’ are ironical when written together, Westworld reflects a tantalizing yet risky possibility of AI experiencing consciousness – in short, artificial intelligence that can feel and question its existence.

Is it really possible though?

The series follows a gratuitous theme park, created in the tone of the American Old West.

This park has ‘hosts’, artificially intelligent beings that are tantamount to humans, almost.

The park is open for humans who pay a colossal sum to enter the park and treat the ‘hosts’ in whatever horrendous and bizarre ways they like.

Humans are shown doing all kinds of heinous things to these hosts.

The mutilated hosts are then taken away, cleaned, reprogrammed (with all the memories erased), and then placed again for new customers.

So, the problem arises when the robots or the hosts (I like calling them that) start realizing that they aren’t humans, but a plaything of this civilization.

As some of the hosts start to remember every abhorrent and nasty thing they have gone through, they get out of line by starting an insurgency.

For entertainment purposes, HBO and the creators of the show have done a fantastic job.

But for AI enthusiasts, the show has again sparked the debate of whether it is possible that AI will develop consciousness or is it even possible to create consciousness in artificial intelligence.

David Eagleman, who is a neuroscientist at Stanford University in Palo Alto, California, is also the scientific advisor to Westworld.

As per Eagleman, we are still quite distant from the future shown in Westworld because of several reasons.

It’s true! AI is quite progressive today – it can distinguish between pictures of cat and dog, it can play chess with you, and can also tell you which song genre you like most.

However, if we talk about the broad notion of intelligence, AI is still a toddler.

To make it simpler, AI is still far behind a 3-year-old baby when it comes to acquiring a broad intelligence and grasping simple concepts.

A 3-year-old can pick up things, can talk with people, can be persuasive, and can explore a room without running into furniture.

Currently, AI isn’t able to do all this.

So, the primary element of Westworld that showed AI-powered hosts as indistinguishable to humans is still a distant dream to accomplish.

Human Brain and AI – A leap of a million years

Apart from the physical aspect, the most arduous task for humans is to replicate our brain with AI.

This is easier said than done.

If you don’t know, a human brain consists of hundreds of billions of neurons (which are specific kinds of cells) in the brain, each having 10000s of connections to adjacent cells.

This means that a single human brain comprises of approximately a thousand trillion connections. We haven’t yet unfurled our brain’s potential and the secrets that lie in it.

Can AI ever feel emotions?

The most notable neuroscientists in the world have always debated on the topic, “Whether it is possible to make a machine that becomes conscious?”

If you look at how the human body works, it does look quite possible. The structure of our body is made of biological pieces and parts that are adhering to the laws of physics and chemistry.

This means that our body works just like a machine where everything is driving everything else.

As per this approach, it definitely looks possible to design a machine that is consciously active.

Ironically, it’s just a theory. Humans have just imagined it; we have not invented the way to do it yet.

And this happens because nobody knows what consciousness is actually.

Despite the greatest efforts of the brightest minds of our human race, we still haven’t found a way to derive an equation that defines what pain is or taste of cheese is or bitterness in chili is.

So, the biggest problem with AI getting consciousness is that we ourselves don’t know how to express the private subjective experience.

Eagleman explained the depiction of a special vest in Westworld as a way to transmit information into the brain.

And this isn’t just a gimmick but a real endeavor running at NeoSensory. The objective is to transfer information to our brain using impressions of touch on the skin.

With a lot of vibratory motors equipped in the vest (that operate like tiny buzzers in our cellphones), scientists and researchers at NeoSensory are trying to pass information into the brain of deaf people through the patterns of touch on the skin.

The notion is to make deaf people learn to hear and comprehend what is happening by the feel on their skin puts the application of artificial intelligence to another level.

Another endeavor is to make blind people intuitive about what is going around them through the same approach.

This is done by using LiDAR that is used in Google’s office. LiDAR is basically a laser radar that is quite often seen on the top of self-driving cars. This radar helps Google to track whereabouts of everything in its premises.

NeoSensory experts have fetched data from LiDAR and target blind people with the same skin-touch approach.

This helped blind people in anticipating movements around them. As someone starts approaching a blind man, he will feel sensation/vibration in his skin. The intensity of vibes increases as the person comes nearer.

In the show (Westworld), these vests are shown used by private military contractors who intrude the park and are able to spot the position of ‘hosts’ sensing it on their skin.

Westworld Showed AI-backed robots can have Free Will!

It is pretty exciting and thrilling to even think that artificial intelligence can actually have emotions of its own.

I have found Westworld pretty chilling and aphotic in terms of theme, yet intriguing because of the fanaticism with which the show has displayed how machines can have despair and sorrow.

Albeit this has been the core point of focus for neuroscientists all along but when the concept is amalgamated with fiction, a larger audience gets familiar with it.

And this so because storytelling has always been the most gripping tool to enlighten a larger audience.

Let’s assume we are able to imitate human consciousness into AI, what do you think will happen?

It would mean that you can download the brain of a person, redesign it, and fix it into a robot.

No doubt, whether this would be ethically right or not is questionable.

However, that’s a long road ahead even if there is the slightest possibility to do that.

Again, if we assume that the human brain and memory are transferable to robots, does it mean that humans will become immortal?

Not really. Since technology and its application are quite expensive, only people with affluence will be able to leverage the power of AI.

Ethical reform would be definitely needed, just as it is required now.

Building Castles in the Sky – AI and Consciousness

Considering the nebulous nature of consciousness and the dilated sphere of cognitive experiences and properties it shadows, drawing an interrelation with artificial intelligence seems like a pipe dream.

So, Arnold (played by Jeffrey Wright) and Ford (played by Anthony Hopkins), showcased as the architects of Westworld, found it extremely easy to create A-consciousness or access consciousness, as it signifies the factors of our brain that enable us to fetch information from ourselves.

This information includes memories, necessary factors of identity, personal details, and anything typically at a subjective level.

Developing A-consciousness in AI-powered bots is still a possibility but the real problem arises when creating P-consciousness.

Phenomenal consciousness is the crude experiences we feel. The emergence of P-consciousness in the human brain is still a closed book.

As mentioned earlier, this is the type of consciousness that is responsible for our taste of different food, our smell sensations and so on.

Our body has organs that just collect sensation, but why do we connect or feel them is still unexplained.

So, in the real world and not Westworld, if we think of creating such remarkable robots that could question their existence and can feel pain, love, hatred, and fear – then we are still in the dark ages where we can design a robot, infuse AI into it but cannot make it human.

Is this an inevitable loop?

Westworld is revolutionary as a TV series because it has opened up new possibilities to think and imagine.

As per Westworld’s maker Ford, every decision that we take is a result of our experiences and our genetics.

By this apprehension, humans are following pre-set rules driven by our genetics and experiences. So, free will is an illusion.

Apparently, like me, you will also disregard this theory saying “it’s all about choices we make”.

But Ford said that our conscious mind is just a chimera of our imaginations that make it seem like you are making a free-will choice but in reality, you are doing what was pre-determined.

This is pretty deep, right?

Let’s get back to the year 1980 when Benjamin Libet conducted fierce tests regarding free will.

He attached EEG to patients so as to track brain activity and told them to move their one hand whenever they like to.

Patients were asked specifically to pinpoint the moment they consciously decide to move their hand.

And the results were stunning.

Records showed that brain started the movement hundreds of milliseconds before the conscious decision was taken.

So, Libet concluded that the conscious mind didn’t play any role in the hand movement process because the brain activity was already in progress when patients decided consciously to move their hands.

This was an extraordinary discovery with respect to understanding the free-will notion of humans.

However, Libet himself agreed that our conscious mind is powerful enough to counter an action right between when the mind gives direction to move the hand and when the actual movement takes place.

Scientifically, there is no way to prove that the human mind is capable of rejecting our subconscious mind, however, there is evidence that indicates that it does exist in some unknown form.

All this humdrum of neuroscience and psychology becomes quintessential to have much clarity vis-à-vis the comprehension of AI and consciousness together.

I don’t expect all my readers to agree with the fact that free-will is an illusion or what is shown in Westworld is completely true.

Since we are living in an era where every smarty pants is looking to either explore the universe or create robots that can imitate human traits, Westworld has surely given a new perspective.

Artificial intelligence is just decades old, so it would be too soon to assume that it is impossible to develop consciousness in robots.

Grab your popcorn, put on your thinking hat, and watch Westworld at the earliest if you are at all interested in AI and consciousness blended together.

Share your thoughts and let me know your favorite moment of the show. Thanks!