Web 3.0: Is it Really Going to be the Future of the Internet? 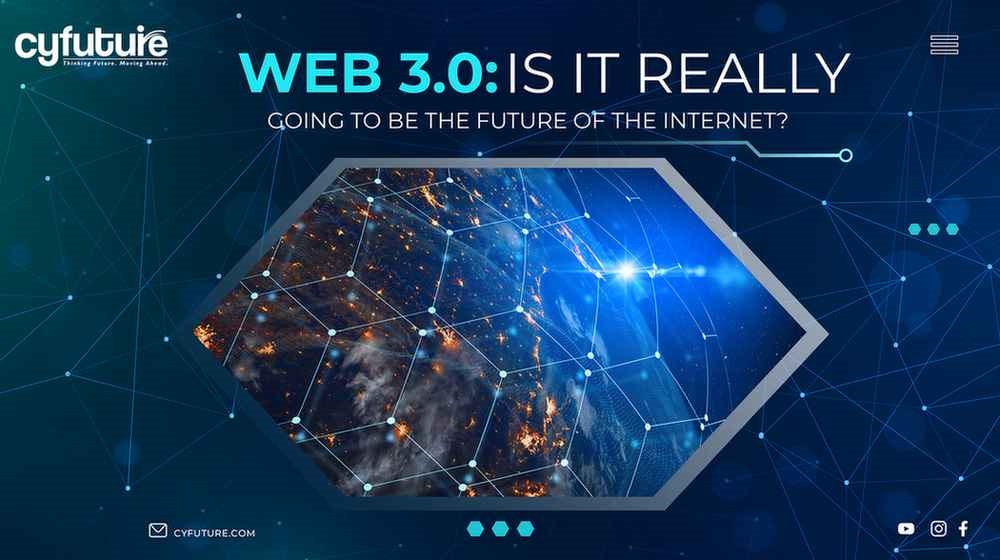 The modern web has completely reiterated the perspectives of people; we have encountered a dramatic shift in people’s interest in Web3. All the endorsers of decentralized systems, cryptocurrencies, and blockchain technology, are trying to explore the prospects of Web3 as it dictates as the new version of the internet; built to offer decentralized web services, powered by blockchain technology.

Our internet ecosystem is mostly under the control of handful of tech giants, but Web3 allows every user to be an equal participant and recipient of content and services available on the Internet. While many of us deem Web3 as the future of the Internet and some of us believe Web3 is a mere overstatement. The reason why Web3 is raising many eyebrows is that it promises to give the power of the internet back to people.

Read More: Blockchain Technology – How Is It Shaping The World Around Us?

The Historical Transition of Web

The term “Internet” was initially known as “Web,” The developers built pathways for users to share data (colloquially known as content these days) with each other. The data was transferred over a network of computers deployed in close proximity to one another. The growth of the internet started manifesting from that movement. The applications of the internet upscaled tremendously and assessing them is almost impossible.

The first version of the internet consisted of two major entities – creators and consumers. Creators were website developers who created websites as a platform for sharing content, and consumers used these websites for acquiring services and content. The functionalities were limited to static content comprising images and texts only. It was the adolescent stage of the Internet.

The internet that most of us know today is Web 2.0 which offered better interactivity with optimized functionalities, and allowed the users to upload and share content by themselves. The added functionalities, simplicity, and user-friendly interface drove many users to explore the prospects of the internet.

The advent of Distributed Hyperledger Systems. We also call them decentralized systems which is gaining popularity among users. It offers complete immunity from centralized authoritative entities acting as the judge, jury, and executioners. Blockchain technology is behind the creation of Web3, making it an indomitable web services there was ever been.

Web3 caters to all the functions of Web 1.0 and Web 2.0 but at its core. It is not under the jurisdiction of a centralized governing authority. Web3’s core functionality comes from blockchain technology. Blockchain offers top-level data encryption methods for keeping the data completely immune from cyber-related threats.

The concepts of Web3 and cryptocurrency are quite relatable. It is because, at the core, their security methodology is based on cryptographic asymmetric-key algorithms and hash functions. Web3 has currently the most impactful security protocols are impervious to online threats like data breaches or unauthorized access.

The technology behind cryptocurrency and Web3 is a blockchain. It helps develop financial incentives for all the users striving to be equal participants on web. Contributing in the making, governing, and enhancement of distributed ledger systems for different projects. Blockchain technology allows the users to avail of the services and contributes to these services at the same time.

Read More: Blockchain Technology: An intuitive guide you will ever read in 2022

How Is Web 3.0 Different and What’s so Special About it?

The all-new Web 3.0 is still under contention and we are yet to witness the imminent versatility of the new version of the internet. We are currently using Web 2.0 which is already providing tons of applications that would be enough to operate a plethora of business and entertainment applications. It is a known fact that Web 3.0 includes cutting-edge technologies. Technologies like artificial intelligence, blockchain, decentralization, and machine learning makes it more formidable than its former version.

Developers across the world are working tirelessly to bring Web 3.0 into reality. Web 3.0 is said to be an advanced version of Web 2.0 in every way. Furthermore, with technological breakthroughs like metaverse and no-code, the amalgamation of Web 3.0 and metaverse is going to be an incredible transition. The combination has the potential to disrupt our current reality. Metaverse is certainly going to be a breakthrough in the entertainment, education, and business sectors.

Having said that, let us talk about the characteristics of Web 3.0

Well, certain someone might interject and say, ubiquity is the primary characteristic of Web 2.0 as it is available and accessible to everyone. So, what makes it so different than Web 3.0? Well, the point is, due to the presence of AI in it, the data or information shared across the web will be much faster and would be more interactable. For example, if you post anything on social media, it will reach everyone at a phenomenal rate and the followers will be able to react to it in a more elaborate and intractable way.

With the advent of AI and Natural Language Processing (NLP), internet users will be able to access information on a larger spectrum. For example, if a person is trying to search for a particular topic that is completely oblivious to them; let us assume trying to buy Bitcoin. It would be the marketer’s job to track the customers’ search criteria for devising a relevant market strategy. Where the customers can access different aspects associated with Bitcoin.

The authentication procedures on the internet will become more robust with the help of artificial intelligence. Semantic analysis can significantly improve people’s experience on the internet by enabling foolproof security protocols. For example, if a group of people on the internet are trying to spoil a company or brand’s image by sharing duplicate negative reviews. The AI-powered semantic analysis tool can figure out the difference between genuine and fabricated reviews.

Enhanced 3D graphics experience is undeniably one of the best features of Web 3.0. It is intended to improve the internet users’ experience by multifold. The combination of metaverse and Web 3.0 is surely going to work beyond a common man’s anticipation. It is soon going to replace the 2D image representation of Web 2.0 like it was ancient. We will be able to witness Web 3.0 as if it were a different reality entirely.

Is there a Correlation Between Web3 and Metaverse?

The new augmented reality concept and advanced version of decentralized internet are becoming the talk of the town; no surprise that both of these concepts are often misinterpreted to be similar, however, both of them are very different from each other. They have quite distinctive purposes; but yes, they are interconnected.

The fact is, Metaverse and Web3 are based on distributed-decentralized methods, and that is the only thing that is common between them. They are not intrinsic to one another, but developers are trying to explore the prospects of Metaverse with Web3 using other cutting-edge technologies like NFTs, IoTs, Artificial Intelligence, and Machine Learning.

Ever since Mark Zuckerberg coined the concept of Meta, the whole world is scrambling to know more about Metaverse, Web3, and all the other crypto-powered technologies. Web3 is definitely the future of the Internet, but we are yet to discover the future possibilities of Web3, as it is quite riddling as of now.