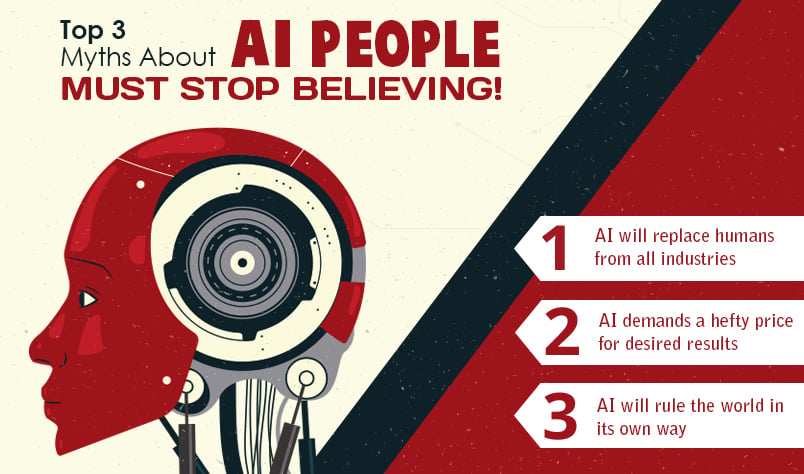 Many multinational companies like Google, Apple, Amazon, etc. are investing a significant amount of money in applications of artificial intelligence to secure a bright future for their business. And boy, they are getting a bang for their buck as AI-powered applications are securing scintillating results with negligible errors.

Like it or not, whenever something starts bringing results which were beyond our imagination to the table then we, i.e. humans, start getting afraid of it. Here, we’ve got ourselves to blame because we usually think if something benefits us, it can harm us as well. Owing to the same mentality, there are some myths revolving around artificial intelligence.

Today, I am going to lift the curtain on top 3 myths that are portraying artificial intelligence in a bad manner, so let’s get the ball rolling:

Myth #1: AI will replace humans from all industries

We have already seen many movies, like Terminator, in which machines were going to wipe out the entire human race, haven’t we? In a similar way, people nowadays think that applications of artificial intelligence will cut the necessity of human workforce from all industries once and for all. However, this is nothing more than a delusion.

Evidently, artificial intelligence has the ability to learn and secure more precise results than humans. But this technology also needs humans to perform better. I mean, if a pertinent dataset doesn’t get provided to machines running on artificial intelligence, this ever-augmenting tech will lose its relevance in no time for sure.

During the 90s, people thought AI would replace human jobs, though nothing like that had happened. After some time, when technologies like ATM machines, barcode scanners, etc. came into the picture, then the same fears of unemployment sparked up again. However, the result was the same, again i.e. jobs stayed consistent. What’s more, such technologies improved the productivity levels of their respective industries and generated new types of jobs.

Therefore, I am laying emphasis on one fact: ‘AI is here to lend a hand to humans, not to work instead of them.’ Want me to give some real-time examples to prove what I am saying? Here are some:

To know more, you can read this article: Is Artificial Intelligence Really a Helping Hand for the Healthcare Industry?

Another misconception that people usually have about AI is it demands a big chunk of money in return for bringing desired results. The major reason behind this is whenever the talk is going on about artificial intelligence, people start thinking about self-driving cars, robots, drones, etc. Because of this type of perception, they often miss the brighter side of the picture.

Unarguably, you will have to pay a significant amount of money to see a self-driving car in your garage. But there are some other areas where applications of artificial intelligence offer great value without asking for too much money. At this juncture, I would love to give an example of AI-driven chatbots.

As reported by Chatbots Magazine, businesses that use AI-powered chatbots in customer service operations save around 30% of their investment than those corporations that avoid bringing applications of artificial intelligence into use.

Besides chatbots, voice assistants like Siri, Alexa, Cortana, etc. are great examples of AI-powered applications that aren’t as expensive as doom-mongers generally say.

Myth #3: AI will rule the world in its own way

The last and most meaningless myth is: artificial intelligence is going to take over the world very soon. Let’s understand this in a better manner: people who aren’t properly acquainted with AI think that this evergreen technology will enslave them and rule the world in its own way.  This couldn’t be farther from reality. I think they have taken fictional movies like Terminator too seriously.

As far as we know, artificial intelligence learns faster than the brightest human minds present in the world. However, it is vitally important to understand that the success rate of AI heavily depends on the data which we, i.e. humans, provide. In a nutshell, AI-driven machines cannot think or learn on their own.

That’s why I am pretty sure that applications of artificial intelligence aren’t going to create any problem in the present and future as well. In addition, if there is anything that this everlasting tech can do to mankind, it is going to be only good, as that’s what it is made for.

These days, we are surrounded by machines which are making our lives awesome, right? Artificial intelligence is one of those technologies that will certainly amaze us from time to time. Thus, we should stop believing myths around AI and try to learn how this tech can add value to our personal and professional lives.

Do you have some info on mishaps that happened due to AI-powered machines? Well, pal, I am not going to argue on that. All I can say is artificial intelligence does what humans teach it, therefore, there is a high possibility that such mishaps happened because of some programming errors.

Thanks for reading thoroughly!!