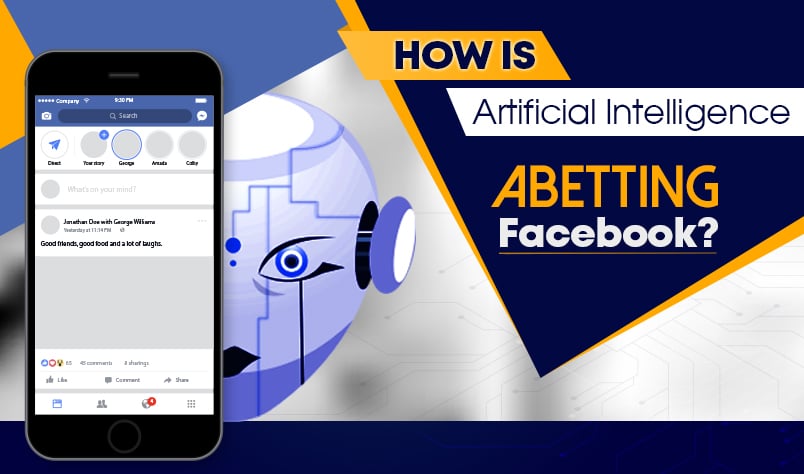 Believe it or not, the world in which we are living is full of surprises because just when you think nothing new is left to see, something comes out from nowhere to leave you stunned. A vivid example of this is ‘Facebook.’

In 2004, Facebook had taken the world by storm as it showed a glimpse of true social networking experience. And people across the globe welcomed Facebook with open arms, and the number of FB users is still on the rise.

Put simply, Facebook has been making headlines since its launch. To keep the success ball rolling, applications of artificial intelligence have been brought into use. By virtue of AI, Facebook has made a giant leap.

In a way, AI is both closer and farther off than we imagine. AI is closer to being able to do more powerful things than most people expect — driving cars, curing diseases, discovering planets, understanding media. Those will each have a great impact on the world, but we’re still figuring out what real intelligence is.

Today, we will learn how artificial intelligence is playing a vital role for Facebook. So, let’s roll:

You may be acquainted with an old adage: ‘‘A picture is worth a thousand words.’’

But, is it really a good approach to use images in every context? No, of course!

That’s the main reason why most of the shared data is, on Facebook, in textual form.

However, analyzing every bit of data isn’t important, as there is no benefit in utilizing resources on something that isn’t essential. At this juncture, DeepText comes into the picture.

DeepText, a tool based on artificial intelligence, is being used by Facebook to extract the meaning of words posted by its users.

By means of DeepText, Facebook can easily overcome all the language barriers which were difficult to address via traditional NLP techniques. In simple words, DeepText paves the way for seamless textual analysis.

The prominence of DeepText shouldn’t be taken lightly because it really offers great help to buy those products, which FB users talk about while having a conversation. Getting confused? Check out this video to clear all your doubts.

In this technology-driven era, many social media platforms are available to use, but Facebook is yet to be dethroned because it is still pushing its limits to give stupendous user experience rather than resting on its laurels.

With the intention of giving an enriching experience on its platform, Facebook is using an AI-driven facial recognition application called ‘DeepFace.’

The salient perk of DeepFace is that it recognizes people in photos.

Seeking an example? Remember, when you upload a picture on Facebook and click on faces in the pic, suggestions appear that tell the correct name of all persons present in the image.

Plus, when you click on the suggested names, all the people in the pic get tagged automatically to your post, which definitely saves precious time and leads to seamless sharing. All accurate suggestions appear because of ‘DeepFace.’

The success rate of DeepFace is around 97%, which is quite high as compared to humans (86%).

Well, that time has gone when Facebook was solely used for entertainment purposes, as it is currently being used for achieving business objectives.

Facebook is one of the major social media sites on which companies prefer to run ads in contemplation of impeccable business growth. Why is it so? Well, FB has a large user base, which is a direct signal to the high availability of prospects.

However, running ads on social media platforms isn’t easy, as you have to play every card right while doing so.

To make the life of marketers easier, Facebook is investing a big chunk of money in applications of artificial intelligence.

‘How does artificial intelligence help marketers accomplish their set goals?’

With the help of AI, social media marketers get an insight into:

All in all, artificial intelligence is helping Facebook to maintain its supremacy in the social networking world.

Artificial intelligence, an ever-growing tech, has become a prime choice for those organizations that have a hunger for success.

Facebook, a social media giant, is already enjoying the benefits of investing in applications of artificial intelligence. There is a high likelihood that FB will achieve what is in its vision, as AI is just going to improve with time.

Like Facebook, other big names of social networking world are showing great interest in artificial intelligence so as to stay strong in the ongoing cutthroat competition.

Therefore, if you have a wish to stay ahead of your business rivals, artificial intelligence services are the thing you should be availing.