The Age of AI: Robots can dream like Humans 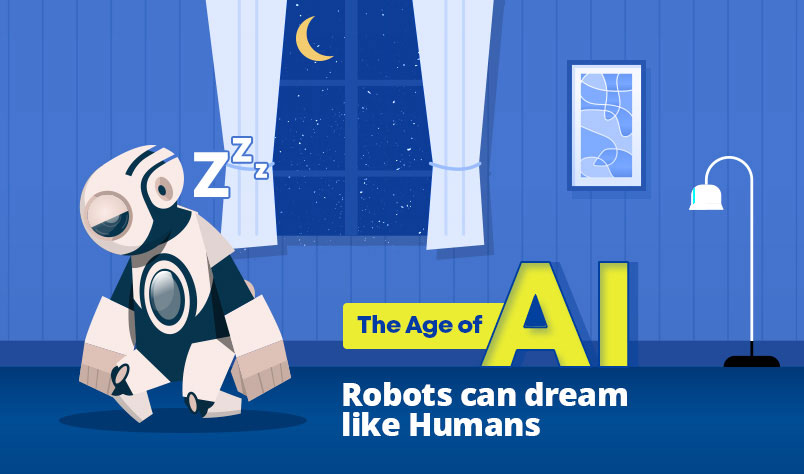 Scientific and fictional movies have always conveyed one message to the world that it is usually a bad and alarming signal when a robot has started getting dreams or some visions.

Dreaming robots will categorize data which they have analyzed and process the most suitable way to resolve issues which they confronted in the day and thus, it is assisting them to adapt in a way humans do.

A good night’s sleep is not just regarding getting relaxed, when we dream, our sub-conscious minds work out various events from the day. This might mean undergoing a sentimental experience in terms of several past memories, or probably discovering a solution about some topic which troubled humans in the day.

However, what can we say about robots?

Can AI replace human jobs in the near future?

Ho profitable can chatbots be for a business?

There are a lot of variables associated with their existence.

As robots are unable to dream regarding flying in the sky, a team of researchers is operating to offer them the similar capability to create various observations in the night sleep time.

A Robot basically never operates with its own brain. As a matter of fact, irrespective of the fact it is gifted with a brain by its God (we can say its creator or human), a robot will never possess its own mind. A robot can be defined as a machine which works in a similar way in which humans do.

Robots do get confused like humans and thus their dreams can be troubling too. Dreaming of robot can signal to loads of things, but all it depends on how we, the humans interpret them.

So how scientists can help with dreaming? They can provide the robots with various training programs of some rules as well as parameters that they will later on verify with overnight. This path must lead to a better and highly proficient track in the upcoming future.

However for AI-driven scientists, the complete idea is nothing although a nightmare situation. As a matter of fact, dreaming might be a chief solution for building Artificial Intelligence systems, agents as well as robots which learn quicker and with depth — which is, just in the way we do.

Natalia Díaz Rodríguez, a researcher for the Paris-based research initiative, Project DREAM, is working on this challenge and explains her take on this scenario.

“What our team is attempting to do is basically include sleep as well as dream driven phenomenon into a cognitive framework of robots”.

A flood of latest studies recommends that sleep as well as dreaming researches facilitates the human brain go through entire day’s experiences to amalgamate and even insert the significant ones with depth. In the same way, by providing robots as well as Artificial Intelligence machines off periods, technically where they will incorporate what we have provided them to learn, Project DREAM is going to enable such robots to provide some latest data and to get trained and adjust to dynamical events. Artificial Intelligence in India is yet to hit on this subject although NASA is ruling it at present.

So our next question is: what robots basically dream about?

While a robot decides to sleep, can you wonder what it basically dreams about? Video games, may be? Or Flying in a Sky?

Before robots start actually dreaming, scientists are training robots and teaching them to learn through reinforcement techniques which is via a collection of rewards along with penalties.

They are taking one of the highly significant initiative regarding Artificial Intelligence as well as deep learning targeting to combine reinforcement driven unstructured learning along with already defined “off times” similar to sleep and even dreaming, while robots will examine and collect what they have been trained about.

Google’s DeepMind: Helping robots to have the ability to dream

Google is no behind when it comes to Artificial Intelligence. Google’s prime success with DeepMind arrived by means of standard video games. Games such as Breakout as well as Asteroids enhanced Artificial Intelligence, the much easier sequences needed for those respective game, however even located the base for supervised learning techniques utilized at present.

Thus, in the consequence of latest Neuro-scientific inventions disclosing the significance of dreams for the purpose of memory consolidation, Google’s Artificial Intelligence industry DeepMind is introducing a latest technology that enables robots which can dream for the purpose to enhance their proportion of learning.  A study has shown Artificial Intelligence oriented dreams significantly entails multiple scenes from Atari Video games.

DeepMind’s initial success consisted teaching Artificial Intelligence to use old videos games such as Breakout and Asteroids. However the eventual game here is basically for helping robots dream regarding the similar things with which humans do thereby challenging the real world scenarios which play significant roles regarding learning as well as memory formation.

To perceive the significance of dreams for those AI robots, it is advisable to analyze how various dreams operate in mammalian brains like our own (considering it does not involve any aliens who are eavesdropping over the technical journalism scenario). One of the chief researches which researchers made in pursuit to scrutinize the role of such dreams from a neuro-scientific point of view was basically the structure of dreams is highly  threatening and negative.

DeepMind is utilizing dreams in the similar fashion, speeding the ratio by which a robot understands by concentrating over the challenging or threatening structure of a scenario under a game.

When we talk about humans, nocturnal sleep (or we can consider daytime naps as well) facilitates to amalgamate memory, moving ‘short-term memory’ towards ‘long-term’ storage. Via these 3 different methods: stabilization, improvement along with integration, human brain migrates memories towards an uber-planned filing system for simpler procedure in the coming future.

The ultimate and the end game is basically to get robots to dream like humans. Since we humans find technology bewildering and amazing, we do not want to stop at chatbot services. Humans always have to crawl first before they learn walking, but in case of robots, they have to beat asteroids if they have to seize facial detection research.

The Road to Future

The objective is to migrate artificial intelligence on the road to learning in the same way as humans do which is via experimentation. The move from supervised learning, the point where Artificial Intelligence scrutinizes provisioned information, seeking for patterns, to unsupervised learning entails training robots to experiment and scrutinize how various actions influence the results. This form of learning is basically much time taking because of an unlimited amount of variables that makes it pretty suitable solution for the time of inactivity, or the time of dreaming. It is yet a burgeoning field of discovery within the artificial intelligence realm. However everything at present is completely experimental, various artificial neural networks are experiencing huge leaps within image categorization.