The Good, Bad and Ugly of Artificial Intelligence 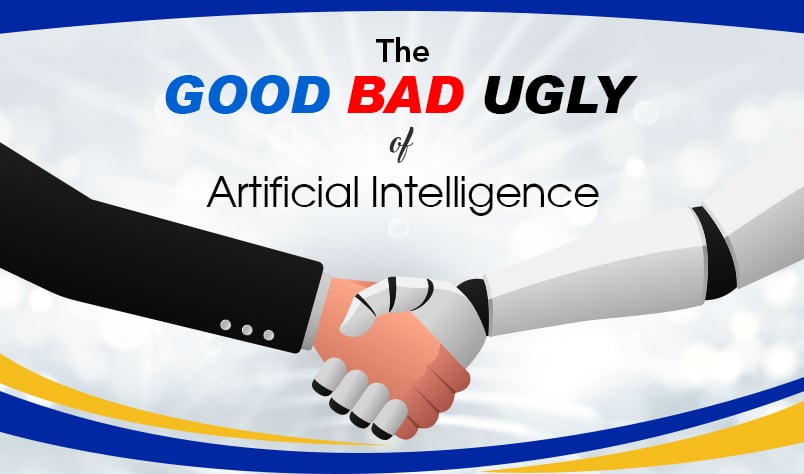 Reading the bigwigs of AI

“From even the greatest of horrors, the irony is seldom absent.”
H. P. Lovecraft

Humans are the only species capable of self-annihilation – If that is true, a lot of hunch over AI and its role in Humanity’s future make sense.

AI is the human’s attempt to breach the code of nature and infuse intelligence in machines; basically to work more productively.

If we trust stats, by 2030, the Artificial Intelligence industry is going to grant $ 15.7 trillion to the global economy.

Accenture, a leading technology firm, has estimated that by 2035, £ 654 billion will be contributed by AI to the UK economy.

In a nutshell, you can comprehend the ferocious domination of AI in the business sector and the world economy.

Why did the chicken cross the road?

So, what was special about Google? It is the first search engine, right…what else?

Today, Google is not a Noun – Google is a verb and an adjective (at times).

You want to know the temperature in your neighboring city, ask Google. Seeking information on the new university you are going to join, ask Google. Want to buy a DSLR? Just ask Google.

Ever thought how can you search anything and everything on Google in seconds? What makes Google special?

It is the capability to process stacks of information and dig out the exact answers to questions that make Google such a hit. The propulsion of Google was inspired by AI, from the very beginning.

And not just Google, Facebook, ‘the social network, is also utilizing AI to charge and bolster its advertising, curated news feeds, and photo tagging feature.

Other Tech innovators like Apple and Microsoft used AI to introduce Siri and Cortana.

The burst of artificial intelligence is a byproduct of human’s curiosity to create. If someone asks “Why AI” – tell them because it was needed.

However, the greatest doomsayer of our generation, Elon Musk, is not a fan of advanced AI!

He’s probably, one of the most brilliant and sharp minds of our time and he believes investing in future techs. Still, he is scared of AI?

Elon Musk, CEO of Tesla and CEO/CTO of SpaceX, has some wary concerns about artificial intelligence.

Although Musk’s current obsession and objective are to make interplanetary colonization a reality, his take on AI is rather interesting and disturbing to some.

In an interview in 2014, Musk has agreed to the fact that Human extinction is a possibility and there are high chances that technology is going to play a role in the same.

You will be surprised to know that Deep Mind, the innovative London Laboratory for AI had Musk as its investor before Google gobbled it up. According to Musk, his investment was less about ROI and more about keeping a check on the latest development on AI.

AI is enhancing at the speed of light and most of the people cannot experience it because….robots aren’t walking on the streets, yet. Musk, being a visionary, wanted to be close to AI to understand its ramifications.

If we believe Musk, we are already in a process of transition. Musk regards humans of the contemporary epoch as Cyborgs. Aren’t we?

I mean our phones and computers are what? These devices are an extension of ourselves albeit the interface that works via fingers or speech. It might be slow now but in the coming future, AI is going to outpace humans.

This is why Musk is also in favor of putting some sort of regulations on the research, designing, and development of artificial intelligence to avoid any apocalypse kind of event.

Obsessed about creating artificial super-intelligence, Hassabis started Deep Mind with a vision. But as AI gained more popularity, tech giant Google acquired Deep Mind. Any guesses why? Google is a pioneer player in the field of AI – hence it shopped everything related back in 2014 only.

Musk, on the other hand, wanted people to play safe with AI and hence co-founded OpenAI with none other than Sam Altman, who is the chairman of Y Combinator. The objective of such inception was to develop AI safely.

Even though Larry Page and Musk are good pals, their disagreement on AI distribution and regulation is escalating every day.

Currently, OpenAI is working day & night to reach the apex of AI first while Google and Deep Mind are on the pursuit to develop super intelligence. Reaching on any conclusion isn’t possible right now.

There can be a myriad of purpose to get into AI but the reason Jaron Lanier told has some ambition to it.

Jaron Lanier, also known as the father of virtual reality, explains that AI is so fascinating to technical experts because it offers them a sense of immortality that they can create something that no one else can.

Developing super intelligence is not something that people with power and money can do – but only people with expertise in the domain and interest in the subject can make it happen.

This sense of narcissism is the biggest push that motivates people like Page and Hassabis towards the advancement of AI.

Take the example of Google. It bought Deep Mind for a whopping $ 650 million crushing the other bids from its rival Facebook. Google has been seriously investing in robotics and machine-learning companies in the last decade. It even crafted the inventive Google Brain workforce to research and study AI.

Larry Page has always believed that artificial intelligence is the ultimate fate of Google, be it dark or bright.

Don’t forget, it was Page and Brin who made the impeccable search a reality on the web at a time (the 1990s) when looking out for something on the internet was an arduous task. If they can do it then, they can do it now too.

And the efforts of Page and his peers aren’t going in vain. In March of the year 2016, the entire Silicon Valley was shocked when Deep Mind’s AlphaGo outclassed legendary South Korean player in the world’s most baffling board game, Go.

In January of 2017, an AI program displayed how it could bluff. So, Google is playing all its tricks to get the most of AI. And the ones it couldn’t…..it bought them.

AI is Google’s frontrunner and surely if any evil AI is going to emerge anytime sooner or later, it would emerge out of Google only (just kidding)!

Even though Zuckerberg remained out of sight in most of AI’s dawn, this doesn’t mean he didn’t have a preference.

Mark Zuckerberg, the youngest billionaire in the world and the owner of Facebook, is known for challenging himself for a year. A geek by heart, Zuckerberg took AI as his new challenge in the year 2016.

Not more than three weeks had gone when Musk and Altman announced the inception of OpenAI to save the world from hazardous ramifications of AI, Zuckerberg issued a Facebook post regarding how his new self-improvement project for 2016 will include developing an AI that could assist him in home functions.

He went a step ahead and even called it Jarvis from ‘Iron Man’. As a result, the desks of AI professionals were brought near Zuckerberg in the office.

Zuckerberg’s view on AI differs completely from Musk. According to Mark, applications of artificial intelligence is meant to make our world a better place to live.

Being a coder himself, Mark is not concerned about the far-fetched fear-monger about AI taking over humanity.

On one hand, Musk disregards Zuckerberg’s home project as ‘not AI’ and on the other side, Zuckerberg defines Musk’s premonition as ‘hysterical’.

As per Zuckerberg, concerns and challenges are always there when something new is emerging and that is comprehensible. But slowing your pace because of such hindrances and fear is not a wise man’s action though.

Mark compares the rise of applications of artificial intelligence with the invention of airplanes. There was fear of falling down – but it didn’t stop us from creating and enhancing new models.

Zuckerberg says that the first rule is to make an idea work and then put restrictions or modifications in it to avoid any mishap.

AI – the slippery lane ahead

In the year 2016, Microsoft, launched its AI, Tay, with a hope to make it better and interactive while conversing with users on Twitter.

Microsoft had to shut it down. People on Twitter made Tay racist, sexist, and anti-Jewish, as put by Microsoft.

This again fired up the debate of whether artificial intelligence is good, bad or ugly.

Creating something smarter than ourselves can lead to some fantastic and some terrible repercussions. Coming time, for sure will be either of two; self-destruction or universal colonization!

Artificial Intelligence is surely going to be a revolutionizing chapter in our lives. For generations to come and till our brains turned into rotten eggs, artificial intelligence will persist and continue to evolve.

Will it ever surpass us? What do you think?