How Does AI Help Hollywood Attain Success At The Box Office? 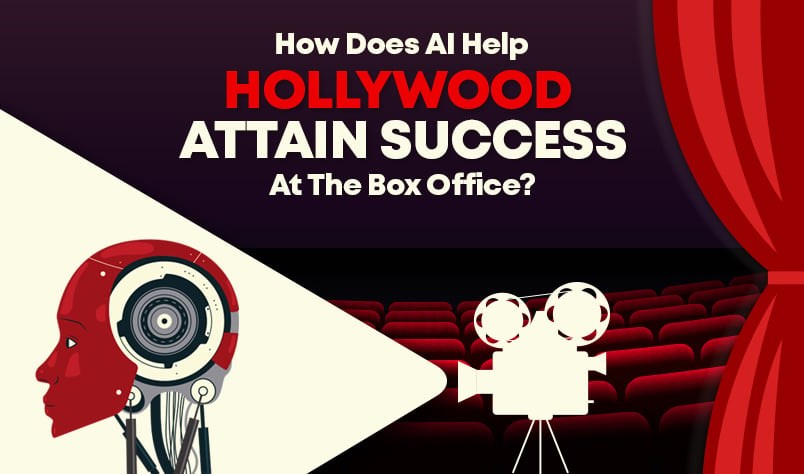 The craze for Hollywood flicks is intensifying with every passing day. Even in some countries, local films are biting the dust owing to Hollywood movies. Here, I would like to lay emphasis on the fact that all Indian films, in 2019, have struggled at the box office, while Hollywood flicks have set new benchmarks. Marvel’s Avengers: Endgame is a vivid example here!

Recently, I have watched the trailer of ‘‘Terminator: Dark Fate’’, which again, sparks my curiosity about ‘How does Hollywood deliver extravaganza cinematic experience every so often?’

This time, I wasn’t going to hold myself back, thus, I pulled my socks up and did in-depth research to crack the code why Hollywood movies attract a horde of cinephiles. Guess what, artificial intelligence is the technology that is working behind the scenes and helping Hollywood moviemakers in catching moviegoers’ eyes.

With the help of applications of artificial intelligence, Hollywood is winning hearts across the globe.

‘Do you even know songs on which you love to dance are the result of AI?’

Nah! Well, here is a write-up, which will certainly act as an eye-opener for you — ‘How is AI helping Music Industry to deliver Chartbusters?’

And you need to pay heed to the following pointers to learn how AI technology is helping Hollywood to consistently deliver blockbuster movies, so let’s get rolling:

Sometimes, digital characters like Thanos feel real during the screen time because they seem so true. All this happens because of CGI (computer-generated imagery) technology, which is powered by artificial intelligence.

CGI technology narrows down the difference between real and digital characters, which, in turn, ensures an incredible experience for theatergoers.

In order to come up with an enticing trailer, IBM researchers let the company’s supercomputer Watson study 100 movies and their trailers. After identifying patterns in terms of visuals and sounds of 100 movies, IBM Watson suggested 10 scenes, which should be included in the trailer of the movie ‘Morgan.’

From those 10 suggestions, 9 were implemented, thereby, a film editor came up with the new and impressive trailer in a single day, which is quite faster as compared to the typical process.

Arraiy, founded in 2016, has its own AI software, which offers great help in the creation of digital effects for movies, games, etc. by automating most of the tasks.

Building digital effects has always been a painstaking process. This is so because when the camera moves, the angle from which the CGI object is being seen also changes.

For every perfect shot, a large team of VFX artists puts so much effort and spends a lot of time. This is where the prominence of Arraiy’s AI software amplifies, as it saves time to a large extent and aids in inserting & deleting objects in the raw camera footage.

What’s more, Arraiy’s AI-based software helps to quickly edit noise and mistakes in the taken shots. Plus, simple effects can also be applied in a jiffy. Barring saving time, this leads to a significant reduction in overall production costs.

Read Also: How does AI Help to Make a Fashion Statement?

In this day and age, only those movies stay for a long time span in theatres, which have a good storyline and jaw-dropping visual effects. It is so because moviegoers want to enjoy every minute of their screen time. And compromising with anything be it script or VFX could result in failure at the box office.

The future looks good for Hollywood as applications of artificial intelligence are being used to make movies impactful. Another reason why AI should be hailed is it is accelerating the movie-making process, which as a positive result, leads to significant savings of time and production money.

Thanks to AI-based technologies, Hollywood now can ask both actors and actresses to play any type of imaginary role, as all it takes is heavy makeup and latest equipment.

With so much money on the line, artificial intelligence ensures nothing results in loss due to mishaps. At this juncture, I would like to stress on one fact that Universal Studios was in a problem when Paul Walker (one of the main characters of the fast and furious franchise) passed away, as the shooting of Furious 7 was yet to be completed.

At that time, CGI technology came to rescue and ensured fans of the movie doesn’t feel the difference between original and digital stand-in Brian O’Connor (Paul Walker’s character name). This should be plenty to understand the significance of artificial intelligence, right?

Let’s hope things get better for Hollywood as who likes to miss an amazing cinematic experience. Thanks for reading!