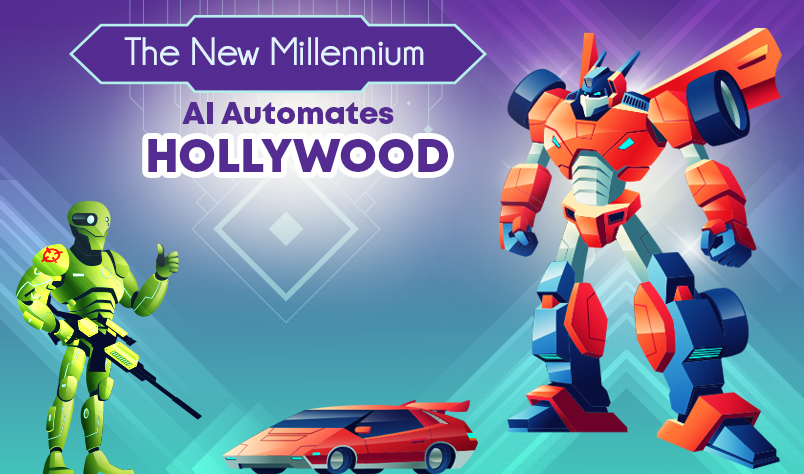 Welcome to a brave new world of Artificial Intelligence and its implementation in Hollywood.

There’s no denial that the promise of artificial intelligence is taking over the world. The next time when you sit down on your couch to watch a sci-fi movie, the algorithm in that movie at the backend may be the work done by AI, or conducted by robots or offered by a combo robotic algorithm.

The realm of Hollywood has been buzzing since years regarding how robots are going to destroy humankind (as showed by the Terminator franchise), unite with us (as showed by Transcendence), or simply make our lives better (Her), the quickly enhancing technology of AI is promising to dramatically reframe how films are processed within the movie business.

From the huge machinery to the innovation of supercomputers with remarkable operating systems and then reaching to God-like robots, discoveries of this century have transformed our lives in an extravagant manner and we have just witnessed the beginning – there is much to see in the future. Entertainment business are seeing the age of robots, where they can have the access to additional data.

With AI, the artists who are working within the organization will spend lesser time stooped across a system scrupulously, working on ‘frame-by-frame’. They are going to tackle harder challenges instead.

AI and Hollywood taking over the World

Although the processes like face mapping using this technology might take weeks, several of the applications of Artificial Intelligence have evolved with time.

Mentioned below are some of the fields where artificial intelligence is promising to transform the way we enjoy TV and movies:

Silver screen with a silver lining

If all those sci-fi movies have showed us something, it is that God-like robots are strictly not to be trusted!

All of us have witnessed artificial intelligence portrayed over the silver screen, however we hardly contemplate the influence it has behind those scenes. If we talk about reality, we are utilizing Artificial Intelligence to a high degree within Hollywood currently, and it is also casting a huger effect than people can imagine. Artificial Intelligence is doing miracles in Hollywood but it comes with a silver lining which has limitations for the future.

Artificial Intelligence Will Be Hollywood’s Next Big Star

When we talk about the magic of AI in cinemas, the future appears pretty good for the business for now. It is framing it to be a spectacular accelerator for the film-making procedure. Time-saving tasks and real-time customized versions are simply the beginning!

Talented virtual actors will be ready to play any role which Hollywood will ever imagine, without needing to sit in makeup studios for hours for some prosthetics or heavy makeup. These are transformations which enables actors to concentrate on their acting. Artificial Intelligence will be able to replicate the mannerisms as well as voice and thus will create history at every checkpoint.

We can expect that AI turns Hollywood into an enhanced source of entertainment for fans. Moreover, it is expected that someday Artificial Intelligence will even become the deciding factor (Decision-Making) within a movie which is being made, like Netflix’s Bandersnatch Black Mirror episode!