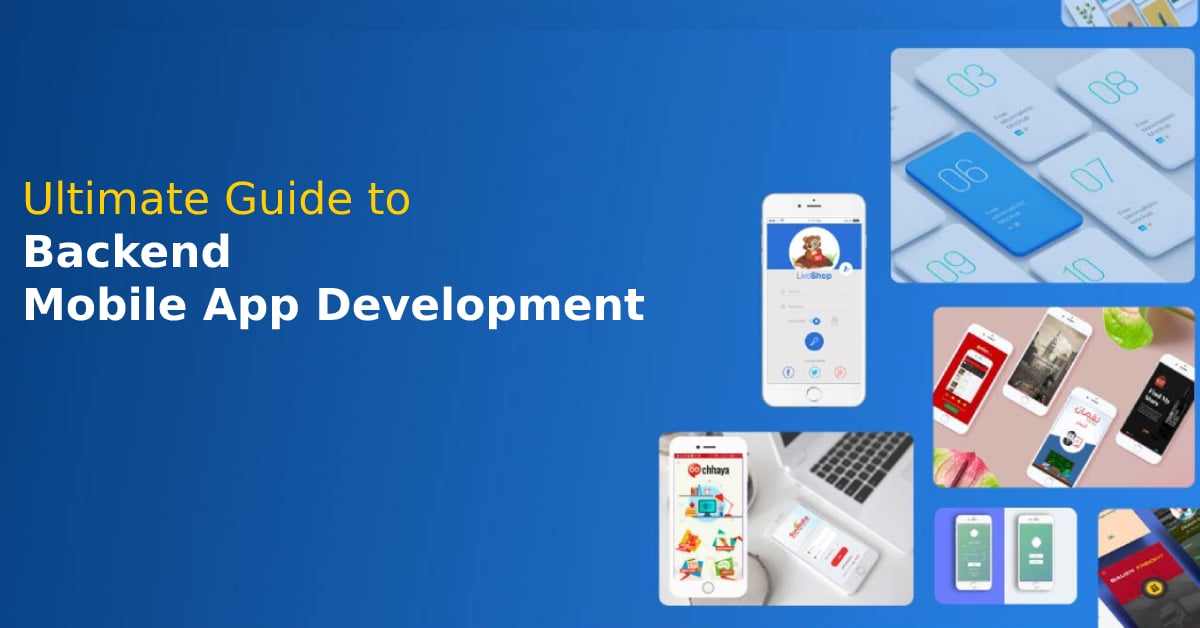 So, you have a great mobile app development idea?

As per the general Google guidelines, all you need to do is pick the right platform amongst iOS and Android and enter the profitable world of the mobile app development market.

What about backend mobile development?

Did you think whether you need to indulge with backend mobile app development or rather what kind of backend coding should you perform?

Perhaps, a smarter question would be, what is a backend?

Well, for novice mobile app developers, neglecting backend app development is a common mistake. For general understanding, let me tell you this, every app needs to have a backend. So, this probably answers your first question; yes, you do need a backend.

Moving forward, why do you need a backend for your app?

But before we answer this question, let us understand what a backend is. 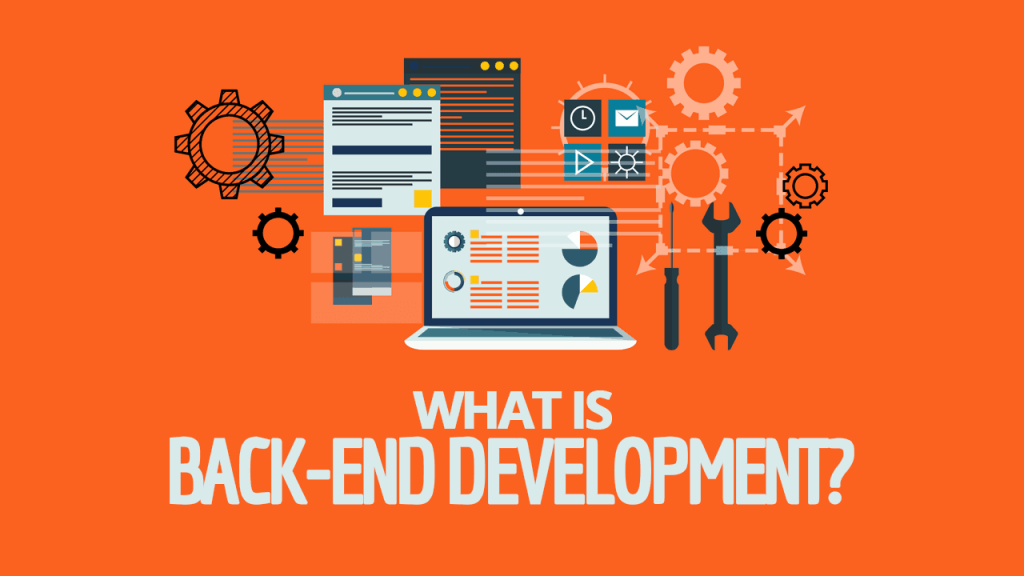 Thanks to the sudden and growing demand for mobile apps, there is a shift in not the focus concerning mobile app development but also the underlying factors and key aspects. Developers are more interested in providing an effortless and seamless experience rather than adding software stacks to the architecture.

However, no matter the type of app you want to build, backend development is imperative.

To those novice readers who don’t know what backend mobile app development is all about, there are two ends associated with this field, frontend and backend.

So, what are front-end applications?

The frontend is everything that visible to the user.

Every app you download from the App Store or the Play Store is the front-end of the apps. The features you use, the apps that interact with your smart devices, the apps you use to make videos, edit photos, and much more, all are frontend applications.

Probably, your next question is, what about websites?

Are those front-end apps too?

Although the website consists of web pages fed with images, texts, and videos, categorizing them as a front-end app would be misleading.

However, for some modern websites, when you load them, at first, it displays a document and then logs into the complex user interface, which is, in fact, a frontend application. Other than those, responsive websites that run on your phone and desktop both are frontend applications, but for user discretion, those are referred to as mobile web applications.

Now, coming over to backend mobile apps, they take care of data storage security and app logic. It provides a common communication ground between a website and an application. An app cannot function without a backend.

Backend apps support the functionality of front-end apps. Precisely, frontend apps communicate with the backend via the internet using computer protocols designed for machine to machine conversation, not so understandable to humans. Most of the time, users are unaware that there is backend software running behind the front-end apps.

What is the Role of the Backend in an App?

Do you want your app to run on multiple device interfaces smoothly?

Do you want the app to store data about a user?

Do you want the app to offer backup options for user data?

Do you want the app to suit different user needs?

Do you want the app to support your business logic?

If your answer to any of the above questions is yes, then you do need backend for your mobile app.

Mobile app development is a tedious and time-consuming process. Developers need to brainstorm about features, look and feel, interface, etc. For any mobile app, before it goes live in the market, it has to follow the standard mobile app development prospects like planning, specifying functions and features, UI/UX design, frontend coding, backend coding, testing, and deployment.

Without a backend, your app is not worth any competition in the market.

So, the role of the backend mobile app development process is to ensure the app databases, coded scripts, and architecture of the application are all in place.

All in all, backend mobile app development are the coded scriptures that connect the information stored in the database with that on the browser.

What does Backend Comprise?

Backend development is more about ‘behind the scenes’ prospect than performing live on stage. However, just like every backstage management, backend mobile app development is all about defining and working on the actual logic of the app or website. Backend developers need to possess a thorough understanding of the backend programming language, framework, accessibility, and security compliances. 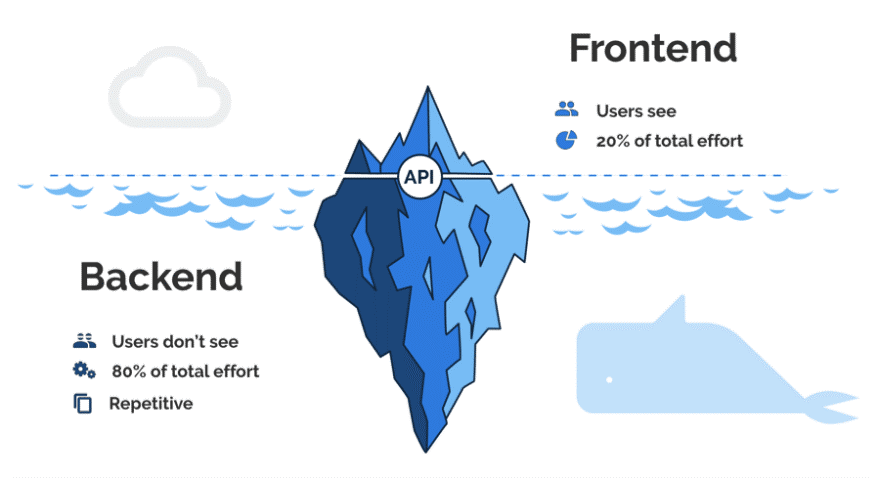 The architecture of a backend development includes the application server, a web server, and a database. Other technicalities like push notifications, email alerts, and queueing services are also a back of the backend operation.

Now, whatever you add to the backend of your app is completely your choice; however, the functionality and features you add to the app will define its success in the user market.

The following are the top tools added to backend development. These include:

For a developer, backend mobile app development is all about working with multiple programming languages and frameworks. Now, frameworks can be added by backend developers as per their requirements. Deciding with a programming language to use amongst Ruby, Java, PHP, Perl, Erlang, and Node.js for writing instructions depends on the app requirements.

In layman’s terms, web servers are places that store, find, process, and deliver web pages to the users. A user’s request includes the HTTPS tag, which leads directly to the webserver. The result is an HTML document consisting of images, style sheets, scripts, text, and videos. For a computer that needs to host any website, they must have web server programs like Apache, Microsoft IIS, and Nginx. Web servers are responsible for internet and intranet programs, downloading requests for File Transfer Protocols (FTP) files, and creating and publishing web pages for user discretion.

Every detail about a user is stored in a database. So, a DBMS allows users to access this data, manipulate, interpret, create, edit, insert, or delete this data. Moreover, database management systems connect a database to a user, therefore, providing concurrency, security, data integrity, and uniform administration procedures. DBMS offers a centralized view of data, accessed by multiple users from multiple locations at any time.

A form of software structuring; it lets developers accumulate services in groups. Overall, it improves the modularity of the app, making it easier to understand, build, and test. Software architectures dependent on Microservice facilitate continuous delivery and deployment. The top Microservice platforms for backend development are XAMPP, WampServer, Laragon, etc.

There are times when backend and frontend are going to work together, and developers on both sides of app development need to stay connected and work in unison and collaboration with each other. Collaboration services make it possible for developers from both ends to work together and practice useful, reliable, and intuitive app development. Top collaborative software for such services includes Slack, Asana, Jira, Skype, Google Hangouts, Trello, New Relic, Munin, Nagios, etc.

The loading speed of an app makes specific notice over here. Hence the load speed of your site has to be such that it has a positive impact on the app traffic. The loading speed of any app should not be more than 6 seconds, and post coding, some tools can help you check the performance and speed of your app. Remember, even a second’s delay can cast a negative impression on your app, rendering inappreciable page speed. Therefore, using speed testing tools like Google PageSpeed Insights and Full-Page Load Tester are considered to be necessary backend development tools by developers. Such apps provide insights about an app speed, suggesting tweaks and edits that can help an app page load faster than usual. Other popular page speed testing tools include Apache Bench, Siege, Bees with Machine Guns, JMeter, GTMetrix, Pingdom, etc.

Functionalities that do Need a Backend

For an app development company in the US, if they want to synchronize user data with each other, store user information in the database, collect orders and process payments, allow users to communicate with an app even if they run on different platforms, indulge in a universal interface irrespective of the screen size, collect statistical data about the users, and want users to get notifications about promotions, updates and news; then backend development is the answer to all these features.

As the mobile app development process complicates, so does the need for an app interface that makes it stand out. You can classify a backend in terms of the frontend, its architecture, features, etc., but the best would be to build a backend for an app from scratch.