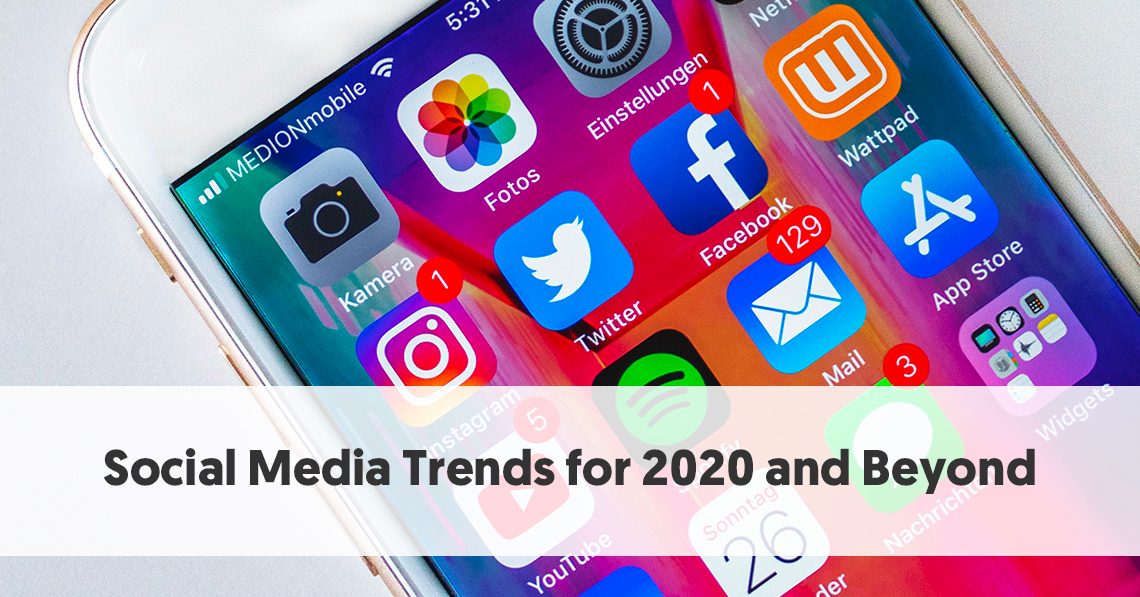 It is known by now that social networking and digital marketing have taken on an indispensable role for any corporate sales and communication strategy. These are, however, environments of constant change and it is difficult to keep up with all the news.

To help you with this process, we’ve put together eight digital marketing trends that will teach you how to gain more relevance in 2020. The data suggests that video and interactivity tools will be the key points to watch for next year.

1) Hegemony of the videos

This is not just a trend for 2020, but something that has been much discussed in recent years. A study points out that by 2020, 85% of search traffic in the United States will be for video content. That is, it is already a reality and needs to be taken more seriously by all brands. Impressions of paid videos on Instagram, for example, already account for 65% of searches. According to Entrepeneur, 200 million Instagram users use the Stories function every month. The expectation is that this number will grow even more. That’s why it’s imperative to put video as part of next year’s plans, whether it’s YouTube / Facebook ads, creating in-house content, or sponsoring digital influencers who have a connection to your brand.

The area of ​​artificial intelligence has grown rapidly, and by 2020, chatbots are expected to become commonplace in our routines. Simple actions, such as ordering a pizza, booking a hotel room, or asking questions about a product, are expected to be done through this medium.

Even because people already have a good view on chatbots. A LivePerson study showed that only 19% of the more than 5,000 people surveyed said they had a negative perception of this technology – versus 33% with positive cases and 48% indifferent as long as the problem was resolved. That is, maybe it’s time to consider embedding a chatbot on your company’s Facebook page.

The live viewership in 2016 was 80% higher than in 2015. And the trend of the following years was also growing. Therefore, it is expected that by 2020, 82% of the world’s Internet traffic will be for this type of video. The public also expects that from brands. About 80% of people would rather watch a company video than read a blog. Already 82% like live videos more than posts on social networks. This is an irreversible trend, and companies can also be prepared to put even more effort into producing quality content for live broadcasts.

Digital influencers are already the second largest source for internet buying decisions. A survey by the QualiBest Institute showed that 49% of respondents consider their opinion when choosing a product. This number is behind only the indication of friends and relatives, with 57% of the votes. Therefore, it will be necessary to integrate these influencers into the marketing plans, creating memorable experiences for these people, which will be passed on to their audience.

In order to increase a company’s credibility, leaders need to be ready to play a good role in social networks. The Social CEO Report, produced by CEO.com in 2015, indicates that 39% of the world’s top 500 fortunes had some social networking profile. Out of this bubble, 80% of CEOs on the planet were creating their online personas. In times of false news and uncertainty, nothing better than humanizing the figure behind the company and giving it a direct voice. Blog posts, Medium, LinkedIn and Twitter are bets that seek to bring a new face to companies.

In the last step of the hourglass is the transformation of the customer into a brand promoter. It is a difficult process but, if used well, generates significant results for companies. So reproducing this spontaneously generated content on your social networks, as a marketing tool, is an upward trend for 2020. After all, as we have shown in this post, the referral of friends counts important points for the sales process and also values more that loyal consumer.

The meteoric rise and fall of Snapchat in recent years has, however shyly, impacted the augmented reality scenario in the world. With various filters that play with our image, they also increase the possibilities of ads in these applications and the creation of custom geolocators.

Another phenomenon was Pokémon Go, created in 2016, which brought the concept of augmented reality to mobile games. All this contributed to increase interactivity with people, creating other experiences. Although the results are not expressive since the mass use of this technology began, we can expect new actions in 2020, either to promote sites, products or specific actions within applications such as Instagram, for example.

We are not talking about a reality similar to the movie She. At least not yet. However, in 2020, there is a tendency to increase the use of personal assistants. According to a survey by NPR and Edison, one in six Americans already use a voice assistant on their smartphones, with 65% of users saying they would not want to go back to a life without them. At first, assistants will not directly impact social networks, but can be incorporated into strategies that use social networks as complementary tools within their digital marketing planning. Web sites and content must be increasingly tailored to voice commands.

Google’s algorithms also value posts that effectively respond to people’s demands. So with the rise of spoken research, this will need to be increasingly adapted to this new reality. In addition, with the greatest interest in such technology, ways of monetizing it may emerge. Thus, you need to prepare for the more intense presence of Alexa or Google Home in your planning.

If you want to know more about how to use these social media marketing trends, you can find some posts about unbound marketing. All of the above strategies can be applied within this model, with effective results for your image and for your company’s sales.