Unethical Use of AI – And Why It Needs To Be Checked 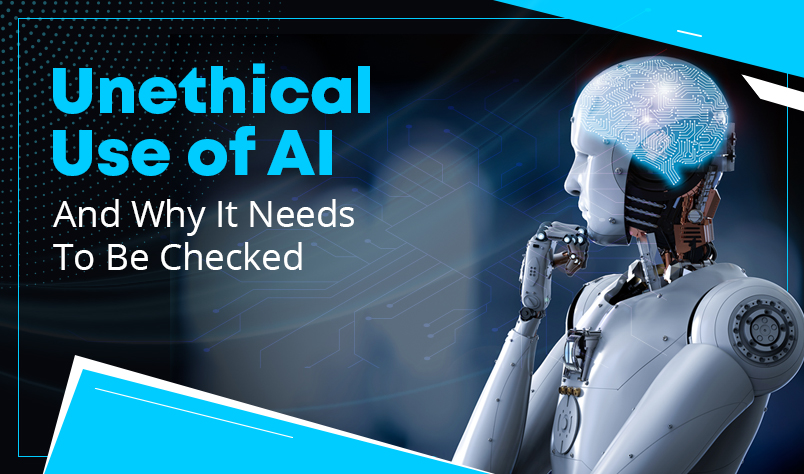 The Canadian computer scientist Yoshua Bengio, noted for his exceptional work on artificial neural networks, recently became the co-recipient of the prestigious A. M. Turing Award for his work on deep learning. He, along with Geoffrey Hinton and Yann LeCun, made groundbreaking discoveries in the field of artificial intelligence and the trio was rewarded for the same.

The trio is often referred to as the fathers of deep learning, which is basically a technique to combine large data volumes with the aid of multilayer artificial neural networks. This whole innovation was inspired by the neural networks that are present in our brain, and it has immensely contributed towards the advancement of artificial intelligence and related technologies.

Bengio works for Montreal Institute for Learning Algorithms as Scientific Director, and has recently raised concerns regarding the risks of unethical use of artificial intelligence. This compelled him to develop and present a set of guidelines that can result in the ethical use of this technology and keep a check on malicious attempts to deploy it for anything illegal or destructive.

“AI is a tool that can be used by those in power to keep that power and to increase it.”

As per Bengio, the threat of this technology is as real as its advantages. No wonder the humanoids and AI drones have made the impossible possible, but who is checking their unethical use? This powerful tool is not accessible to everyone, but those to whom it is cannot be completely trusted with its usage.

He said that this tool in authoritarian hands can wreak havoc too. There are so many people involved in both government and private projects that deploy the application of artificial intelligence. Even one individual amongst them, who somehow is susceptible to abusing this power, can be the cause of unethical usage.

Another factor that Bengio put forth in an interview with Nature International Journal of Science was that unchecked usage of this technology can also amplify discrimination based on gender and race, the reason being the fact that the data or the cause is already present in this technology, which was probably fed in during the training process that helped AI reflect human behavior.

One of the most admirable qualities of Yoshua Bengio, as per my perspective, is that he doesn’t just support the advancements in technology but also brings to our notice the downsides. This is really important considering we are advancing new innovations at a rapid pace and we need some sort of scrutiny to keep a check on how we, as humanity, are handling this superpower.

Technology for humanity is just like a superpower: in the right hands it will do well and in the wrong hands, it will destroy the world. This is exactly why the Montreal Declaration for AI came into existence. Experts like Bengio formed not just policies and rules for the ethical use of AI, but also involved the public and organizations.

The involvement of so many people and even commercial organizations led to the development of principles that were more open-ended. They weren’t created by just some experts who thought ‘ok, let’s ration this technology or make it available under certain regulations’.

It was created with the involvement of so many individuals that it brought to the table a lot of perspective to why we need to have certain guidelines to gauge the use of artificial intelligence. It’s a decision taken by the masses and not just a few experts who claim to be aware of the downsides.

The Montreal Declaration is a whole new level of monitoring that can bring about groundbreaking changes in how we make AI a part of our lives. It can prevent all the malicious attempts at exploitation that can make this technology a nightmare for humanity.

Yoshua Bengio is now working with his team to create a forum for discussions related to the possible downside of technologies like AI. The innovations happening in the field of artificial intelligence, from India to the United States, UK, and Australia need to be kept under scrutiny to not just achieve maximum benefits but also to check inventions like Killer Robots.

Yes, you read that right! Military superpowers are planning this, and it would be far more destructive than portrayed in movies. Killer Robot AKA LAWS (lethal autonomous weapons system) was even a topic of discussion at the UN Convention on Certain Conventional Weapons.

However, these weapons are not humanoids from a sci-fi movie, they are actually just like the standard jet fighters, tanks, battleships, and submarines. The only difference is that they can make the decision to kill masses, and considering how powerful these mean machines already are, they are capable of mass destruction.

This is the reason why creating a forum to check the usage of technology in fields like the military is absolutely essential. You wouldn’t want to put the lives of so many people in the hands of a technology that has a mind of its own. This suddenly made me remember something that Stephen Hawking once said.

“The development of full artificial intelligence could spell the end of the human race.”

He said this in an exclusive interview with BBC in 2014 but as we swiftly move towards the public embracing of AI, we see this as a distinct possibility. If a forum is not created to check the same then powerful nations will slaughter humanity in the greed to achieve supremacy.

In fact, in a recent development, Russia has introduced a doomsday armament, which is capable of carrying nuclear weapons of mass destruction. This may or may not involve AI but it can be the lethal dawn of World War III that can certainly spell the end of humanity and make Hawking’s statement a reality.

The point is that the weapons we have for destruction are already powerful enough. By integrating advanced technologies like artificial intelligence we can make them the “Gods of Death.” This isn’t what the inventors would have ever thought AI would become when they strived to take us as a species to a new level of innovation.

Artificial intelligence should be deployed to automate business processes and to make our lives easier. It should be the technology behind inventions that can support our progress. It shouldn’t become a weapon that powerful nations can use to fight wars. Any nation or organization that encourages the same should be restrained.

In the coming years, AI is anticipated to develop the kind of high-level intellect that can even recognize emotions and this, believe it or not, can be a positive development. However, in the wrong hands, this technology is capable of causing irreparable damage.

It is vital that organizations and nations develop forums to discuss the ethical use of AI. We shouldn’t wait for the day when we get on a path where there will be no turning back. This will help us save not just our world but also save a technology that sure is a boon to mankind.

AI is leading us into a world where we won’t just accomplish tasks in a matter of seconds but also devise treatments for deadly diseases. I hope that in the process of progress, we don’t lose sight of our aim: development not destruction.