Internet of Things – A Boon, or a Bane for the Future? 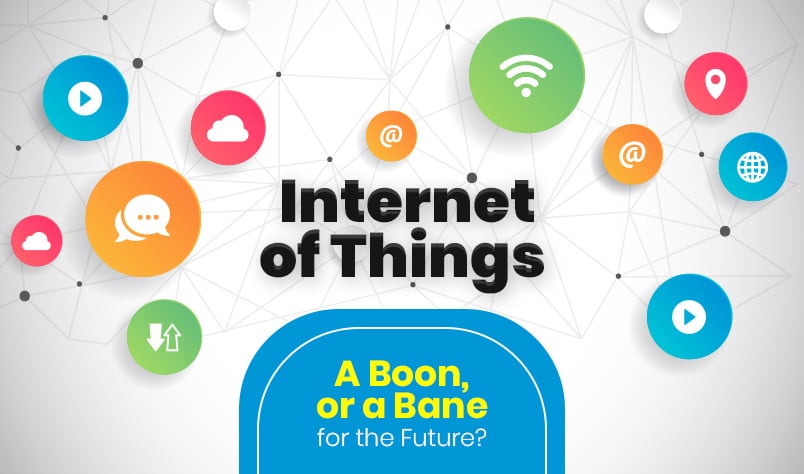 Waves surround us, all the time, no matter where on earth we may be. Do not confuse these waves with those of the seas and oceans – these are universal: radiation in the form of electromagnetic waves, due to which your smartphone can show you everything from the remotest parts of the earth to the latest viral memes.

Manipulating electromagnetic waves to carry out our bidding became possible due to the pioneering work of James Clerk Maxwell. Nobel winner and theoretical physicist par excellence Einstein said of his work as being the “most profound and the most fruitful that physics has experienced since the time of Newton”.

Now that we have built our digital world upon the solid foundations laid down by these giants of technology, the most innovative uses for electronics can be developed and make a “smarter planet”, as IBM envisions.

Things that were hitherto unheard of are coming up every other day. Already, our lives are technology-dependent to the point that we feel incapacitated when we don’t have our phones with us, or if the internet connection is spotty. If only Tesla or Edison could have seen the bewildering functions their work with electromagnetism are performing today!

One of the most advanced uses of applied technological science is in the real-world proliferation of inter-device communication and customized data analysis. Using micro devices and nearly instant manipulation of data, tech companies like Apple and Google can deliver pinpoint user services through their proprietary Artificially Intelligent query response management systems, Siri and Assistant.

Connecting other devices into the user’s existing electronic periphery has brought about a digital revolution in the consumer durables industry as well. Smart TVs, fridges, kitchen appliances like microwave ovens, lighting and home security systems are becoming ubiquitous in the developed world, and a huge potential lies for these devices in the upcoming Internet of Things sector.

IoT in Action: 5 Areas in Which IoT is Proving Its Worth

Devices that Obey without Thinking versus Decision Making Systems

Automation is nothing new, but using it in day-to-day life is the area now being explored by all corporations with the wherewithal to invest in futuristic tech. The usual way is to program the devices to follow certain algorithms and improve efficiency in repetitive or uncomplicated tasks.

The advances in AI have enabled software development to focus on using the user’s real-time factors to take pre-emptive decisions, sometimes without even confirming with the user. This brings up immense data privacy issues, especially for paranoid people. The sharing of data over unsecure channels of communication does open up security vulnerabilities, and malicious programmers like to exploit such loopholes for nefarious purposes.

Regardless of privacy concerns, because of the overall advantages perceived in interconnecting large-scale systems as well as individual-level services, there is a slew of Internet of Things projects already fully functional as well as in the pipeline of various tech behemoths. Nations are also jumping on the IoT bandwagon, with India unveiling a Smart Cities Mission way back in 2015.

Nowadays, deconstruction is one of those trends that may prove to be a short-lived fad or the start of something momentous, like the original deconstruction of literature by Jacques Derrida. By analyzing the components of a particular thing, we can make out more details about its inner workings than by observing it as a whole. Through this process, it may come to light that the sum of the parts is greater than the whole, or vice versa. In either case, we learn about the thing under scrutiny, thus satisfying our inherent scientific curiosity.

As far as Internet of Things goes, its components are completely dependent on the context in which it is being applied. To proceed with its deconstruction, let’s take up a relatively easy to understand scenario which any moderately self-sufficient modern human would relate to without feeling out of place.

A person wakes up in the morning when his alarm sounds. Nothing extraordinary there – knocker-uppers were doing that in the first half of the twentieth century. But voila! The coffee is ready, breakfast is served according to the preferences selected that morning, or by default menus if the person wants to be surprised, and the news, or music, or the film that person was watching last night but slept off in the middle of is on the screen – waiting for the person to begin their day just as they like it.

Ready to leave for work or head out for some chores? The Internet of Things can be commanded by voice, thanks to natural language processing. The person need only utter the words “Leaving home now”, or even simply “Going out!” and the lights will be dimmed, all doors will be double-checked, any idle appliances turned off, and the garage door opened. As the person steps into their IoT enabled car or other energy-efficient vehicle, it’ll await the destination and be on its way. Managing routes and speed according to real-time traffic and weather conditions, the vehicle will communicate seamlessly with a bevy of other services with the prime purpose of getting the person to their destination safely.

Work done and chores taken care of, the person returns home to find that the family spent an optimal day thanks to the all-pervasiveness of the epitome of electromagnetic technology – the Internet of Things. Such days are not as far away as one may be led to believe, and we at Cyfuture can’t wait to lend a helping hand to visionary developments in all fields of futuristic technology!