Explained: Error 503, Global Outage and the Role of CDN in Website Performance

What had until then garnered little attention suddenly became the subject of key interest not just in the subcontinent but all around the world. As more and more searches piled up for the aforesaid keyword, its data on Trend surpassed all previous highs and hit a record level by day’s end.

These searches were made from just about anywhere in the world and caused a moment of turmoil of its own, with sites like Reddit, Forbes, Twitch, BBC News, Quora, and CNN denying requests, causing the web browsers to pop an error. As these websites turned down users and denied HTTP requests, users took to Google and overwhelmed it with colossal amounts of searches, causing the trend to break with the past.

Every time you click a URL, your browser communicates with the website, requesting its webserver to accept and send back the content, which is then parsed and displayed on your terminal.

Error 503 pops when your browser is either unable to reach out to the web server or the latter denies sending any data to you. This can happen due to a faulty firewall configuration or the server being overwhelmed with requests more than it can handle. 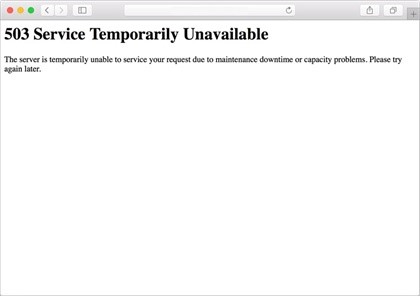 A little investigation into this revealed that the outage occurred on account of a glitch at the end of CDN provider Fastly, and though it was quick to respond, the damage had been done. Referring to it as a Global CDN Disruption, Fastly cited that people may continue to see decreased cache hit ratio for a little longer and urged that people bear with them.

According to the experts at Cyfuture, this incident has had so much hype in the first place because it’s fairly uncommon to see a CDN crumble, though it’s not a strange phenomenon either.

We should realize what would happen if it were not for these content delivery networks. Without these CDNs, these incidents – that are now an event of rarity – would be much less rare and our experience on the internet would nowhere be as engaging as it is today.

A CDN is technically a network of connected servers, each with the content of the website cached onto it, typically referred to – in the IT industry – as a server farm. Each node of the content delivery network caches all or parts of a website’s content, and is specifically built for sites that not only cater to multiple geographies but also experience swathes of users at once.

Without a CDN, a web server would be left to attend to all HTTP requests on its own, and is bound to run short on resources, causing a 503 to occur. CDN nodes are meticulously placed to allow for an even distribution of workloads, and even when one or more such nodes fail, the remaining dole out the resulting traffic onto themselves such that an outage almost never occurs.

Getting a CDN now can save your business a lot of embarrassment and also customers in the time to come. We at Cyfuture have been implementing highly resilient and reliable delivery networks for two decades and have a blemish-free track record of hosting more than 10,000+ clients so far. We can provide your business with a faster, affordable and austere CDN solution for you to rely on in the hour of need. Call us on +91-120-6025102 or reach out to us on [email protected] for a free consultation on CDN.