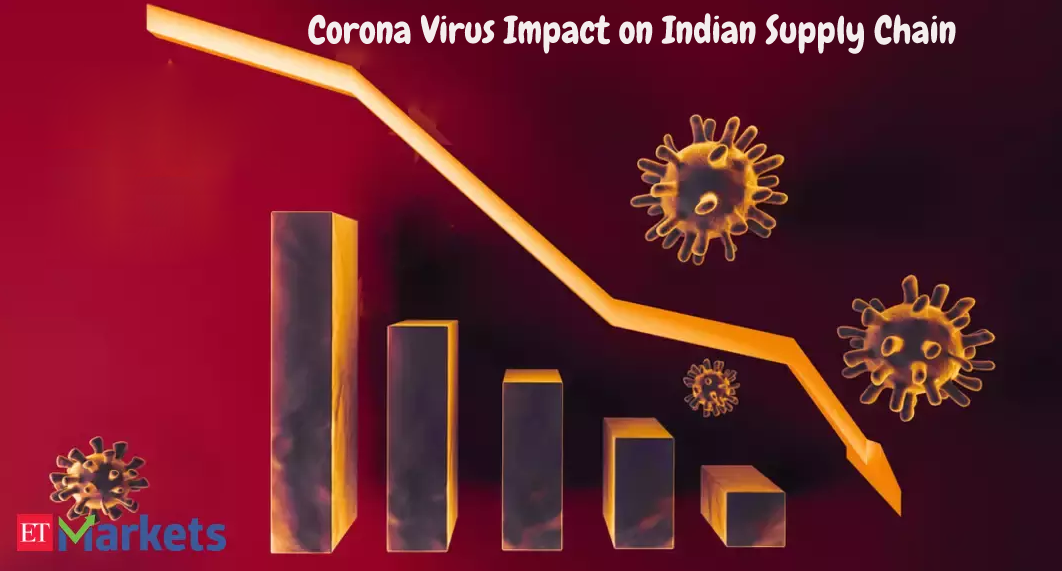 With over 48,000 cases infected cases alone in China, CoronaVirus, a global health epidemic has created a panic situation around the globe. The number of deaths due to coronavirus has crossed the toll of 1,000, the total confirmed cases are more than 60,000, and it’s spreading its infective course onto the surrounding territorial nations of China.

While people are talking about the reeling impact of the virus on human life, the massive disruption to the economic activity of various countries is also worth mentioning. The biggest supply shock is handed over to the Indian market, with 13.7% of the Indian imports at risk due to the outbreak in China. 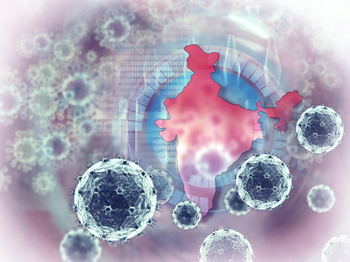 The biggest question over here is, “With India importing goods worth more than USD 356.77 billion from China, now with the extended shutdown of factories, how is the Indian market going to brace itself with this Chinese supply shock?”

The Importance Of China In India’s Foreign Trade Market

China has been the largest source of imports for the Indian market since 2004-05, according to the Center for Monitoring Indian Economy (CIME) database. Furthermore, as per the latest annual data of the Indian import available, 13.7% of the country’s total imports is from China.

As per an analysis of the World Bank’s World Integrated Solution database, the average share held by Chinese imports is:

This data is powerful enough to understand the fact that any major disruption in China will cast a glooming investment impact on the supply chains, manufacturing, and supply of the consumer goods market.

Furthermore, the Chinese units are an integral export market for India. According to the data released by CIME, China is the third-largest export market for India, after the US and the United Arab Emirates. The biggest setback will be suffered by the raw material export division of the country if China doesn’t recover from the Coronavirus disruption. With China acquiring more than 10.03% of India’s export potential, the raw materials producer will be slapped by the slowdown in the Chinese manufacturing units.

According to the Founder and CEO, PrimaDollar, “India will suffer not only because its health care system might be overloaded, but also because efforts to contain the virus will be disruptive. This will, in turn, lead to an increase in the price of the commodities. It will also lead to rising interest rates because the policy response to the supply-shortage inflation is to dampen the demand.” 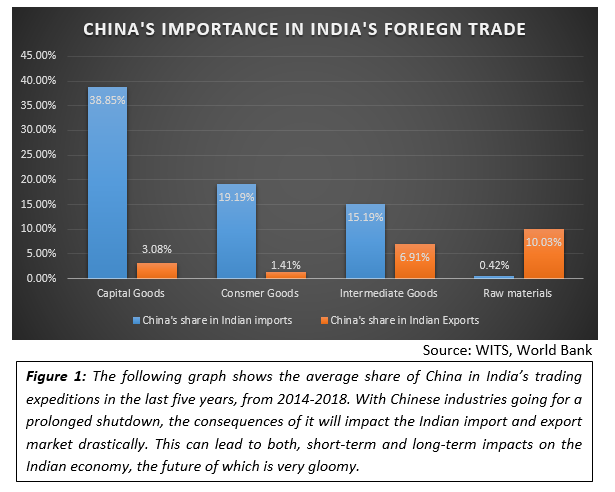 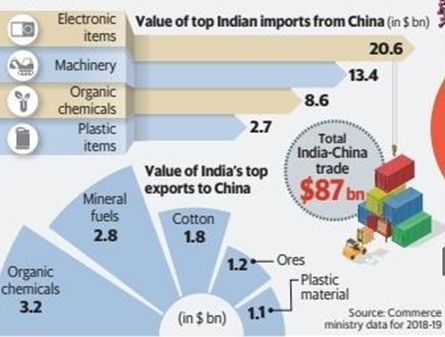 Figure 2: The persistent prevalence of the locked doors of the Chinese manufacturing units will hamper the Indian import market far more than its exports. Furthermore, the total value of the India-China imports in 2018-19 was $87 billion, 18 times more than that in 2002-03 ($4.8 billion).

CoronaVirus was first reported in China, in December, eclipsing the global death toll from its variant, SARS, that started in China almost two decades ago. Since most of the factories are locked, the production units are sitting idle in China. According to Ajay Sahai, Director, Federation of the Indian Export Organizations, those Indian sectors that maintain a low inventory, like electronics, might start experiencing the trade trauma of the outbreak in Wuhan, China shortly.

Furthermore, the Indian economy, mostly imports, is highly dependent on its northern neighbor, China, mostly because of the establishment of trade links between the two countries. The trade scale has expanded to more than 18 times, from $4.8 billion in 2002-03 to $87 billion in 2018-19.

Since most of the phone companies, depend on parts, that are imported from China, they will soon run out of the electronic components, within 15 days. The initial plan was to import parts every month, but with the worsening situation, ramifications like price surge, supply shortage, and slow demands are a bit obvious aftermath.

How CoronaVirus Outbreak Will Impact the Supply Chain Structure Of India? 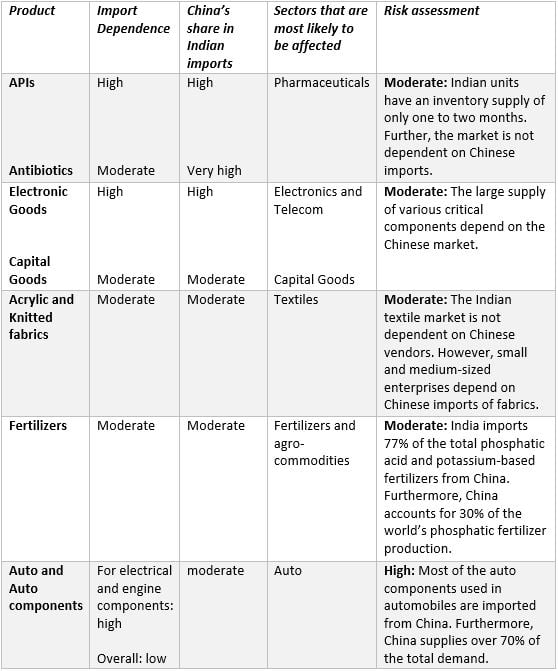 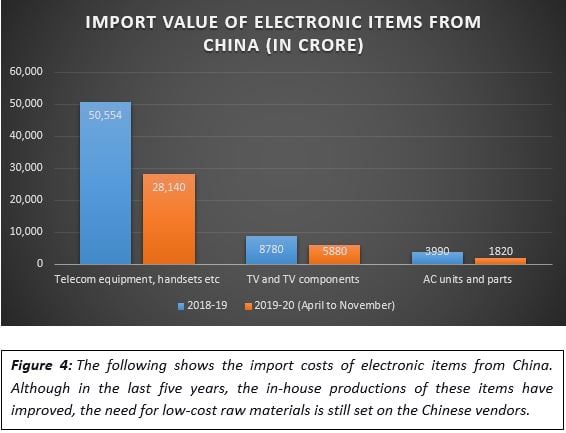 The impact of the CoronaVirus can be devasting for various sectors of the Indian market. Among imports, organic chemicals will be the most affected commodities since India imports 40% of its organic chemicals from China.  Although mobile handsets, the largest category by sales value in the Indian market, is still untouched by any immediate threat. However, if the conditions further than February, it will surely hamper the electronics sector of the country. In 2019, 158 million units of smartphones were shipped from China and only 145 million were sold. All in all, these sectors will experience a swell up in their production over the near medium term.

China accounts for 11% of the global import and 13% of the global exports in 2018. If the outbreak continues for more than two quarters, it will highly impact China’s industrial activity due to a fall in labor availability and low consumer demand.

Figure 5: The Indian economy will get impacted by the massive outbreak of the CoronaVirus. India will, however, remain insulated as compared with the other Asian countries. India is the least exposed and dependent on the Chinese vendors amongst the others, and so its supply chain will not be impacted in the near term. However, if the virus is transmitted in the next three to four months, then the disruptions will be much worse than the 2003 SARS outbreak.

Furthermore, with China being the 2nd ranked nation with the highest GDP, it will experience a 0.5%-point decline in its economic growth this year. This will lead to a 0.2%-point decline in the expansion of GDP in the 10 countries of Southeast Asian Nations including China, South Korea, and Japan.

Is CoronaVirus an Opportunity for India?

While the hard commodities sector is facing a tough blowout from the CoronaVirus outbreak due to a pause in their imports, the soft commodities market of India is currently on a boom. Global buyers are exploring the Indian market for ceramics, homeware, fashion and lifestyle goods, and furniture.

Indian manufacturers and exporters of such goods have received an increasing number of inquiries, mostly from the US and European Union, to replace China as a supplier. Even the textile market is ready for a boom, enough to compete with China.

Furthermore, Indian exporters of chemicals, engineering goods, and marine products will benefit the most from the CoronaVirus outbreak.

What Level Of Impact Will CoronaVirus Have On The Indian Market?

The impact of the CoronaVirus on the Indian economy is ongoing speculation around the world. Indeed, an uneven calm is still prevailing amongst businesses, including India, as the outbreak, has the potential to derail bilateral trade worth $87 billion. Furthermore, $70 billion worth of goods is imported by India on an annual basis. With China as the second-largest trading partner of India, the dependency index of the latter on the former has the power to shut down the local markets and shops.

However, India might have found its importing options apart from China, the outbreak will have a significant impact on the Indian markets. It is predicted by many economists, that CoronaVirus can further slowdown the already struggling economy of India. But others believe that it is a great opportunity for India to scale up their game. What happens next can either be beneficial for India or disastrous.