What Is Internet of Things (IoT)? Here Is A Simple Explanation 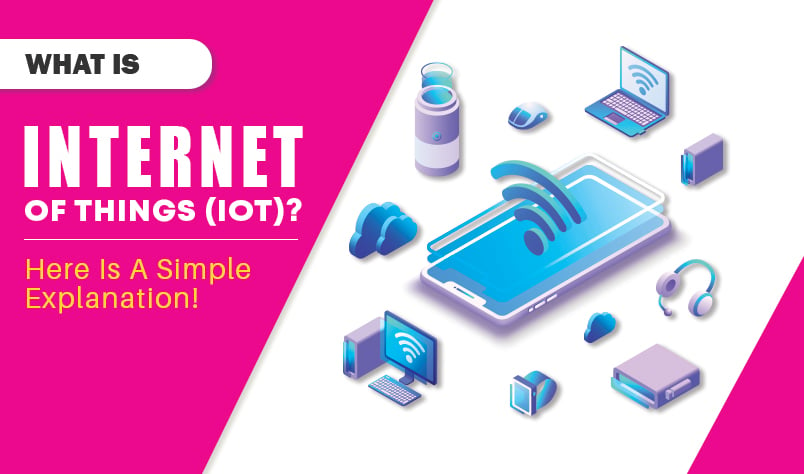 These days, living without the internet is unimaginable for people, especially ones that belong to ‘Generation Z.’ This is mainly because the internet has become the source that enables you to do several things like banking, shopping, etc. without leaving your comfort zone.

With time, the internet of things (IoT) has become a buzzword, so I wanted to learn its meaning but found some complex technical definitions, unfortunately. Ergo, I dug in further with the purpose of finding a simple explanation on IoT. Guess what, I succeeded in my goal … Now, I am going to share the gathered information with my readers just as a goodwill gesture. So, let’s roll:

The cost of broadband internet has reduced significantly, compared to charges a few years ago. In this day and age, most of the devices come with in-built Wi-Fi capabilities, which signals an enhanced level of internet connectivity. This sets a perfect platform for IoT.

Smart TVs, Fitbits etc. are one of the most common real-life internet of things examples. There is a great possibility of more appliances and wearables to come to the market in the near future and take the current level of IoT to the next one.

I have rounded up some interesting statistics on IoT that will definitely act as an eye-opener for you, so pay heed:

Read Also: How Does AI Help Hollywood Attain Success At The Box Office?

As I have already said, IoT is just making our life superb. When some device is connected to the internet, there is a process of information sharing takes places, which promises amazing outcomes.

Here, smartphones are a vivid example, as they ensure you can do certain tasks with perfection.

For instance, if you want to listen to a song which isn’t stored on your smartphone, what will you do? Go online and search for that particular song, right? Here, you need to pay more attention to understand the salience of IoT — when your smartphone is powered by the internet, it sends some info related to the song you want to listen to, and receives all the data to play your desired music. All this happens within a couple of seconds. And this is IoT for you, mate!

There is a likelihood many fabulous things will happen in the future due to IoT. Say, for example, your alarm clock will wake you up and send a signal to your coffee maker to brew coffee for you. It sounds amazing, doesn’t it?

In smart cities, IoT can do wonders like reducing the percentage of waste, suppressing the excessive consumption of electricity, and so on. This cannot be taken lightly because the city of Barcelona saves 37 million dollars a year owing to smart lighting, which is one of the major spinoffs of IoT.

Well, the internet of things (IoT) is going to unlock several opportunities, which maybe we can’t think of right now. But one thing is certain: IoT is going to make things far easier than our expectations really soon.

As we know, every coin has two sides, and that means IoT can possibly have some disadvantages.  Security concerns are acting as a curse on the growth of IoT. Here is one write-up written by my friend, which will tell you about boon and bane of IoT: Internet of Things – A Boon, or a Bane for the Future?

At the start, I promised to give a simple explanation of IoT. With the belief that I have served all the pertinent information according to my goal, I bid you a fond adieu. Thanks for reading!

Today the technology has changed the world of everything. It is one of the most popular things which impact the way of general lifestyle. With the help of it, technology is much simpler than before. Because of it changed all the parameters of technology to connect people with new opportunities.