The Future of IoT: How will this Technology Shape Our Lives 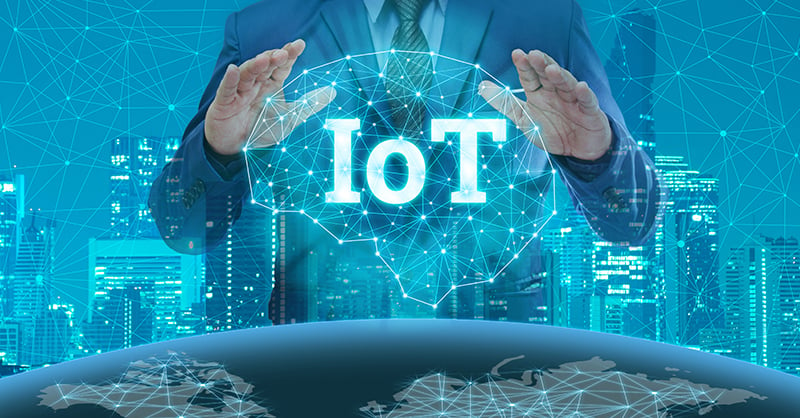 The term, ‘connectivity’ has transformed its meaning, thanks to the Internet of Things (IoT). Earlier connectivity was only related to laptops and smartphones, but with the advancement in technology, the idea has broadened its aspects to smart cities, smart homes, smart retail, connected cars, and healthcare systems.

Billions of devices are now connected with the IoT. Furthermore, 75 billion devices are due to arrive, in the tech market, by 2025. So, the question is, what does the future of IoT look like?

Considering the global IoT market figures, it is currently valued at a humongous price of USD 193.6 billion (for 2019). Furthermore, this market is predicted to reach USD 657.31 billion by 2025.

With the increasing number of IoT-connected devices, this technology, mainly built as a solution for people, is impacting many aspects of our daily life. However, people who think that IoT is not the technology of the future are underestimating its potential and power. There is no single material that cannot be subjected to the IoT and its wonders.

What is IoT or Internet of Things?

Internet of Things, popularly called as IoT, is made of devices that are connected to the internet and share data conjointly. These devices connected over to the internet are not just computers, smartphones, or laptops, but the pool has widened to include much automation into the network.

The benefit of IoT includes synchronized data between all the objects connected to the internet. This improves resource sharing as well, increasing the convenience and comfort of the consumers.

Currently, there are tens of billions of devices connected with the IoT all around the world, and this number is expected to increase in the coming years. With the increasing internet speed and connectivity, many organizations are going to take advantage of this innovative technology. Furthermore, IoT has simplified the exchange of data and information in various sectors of the industries owing to the huge growth potential. 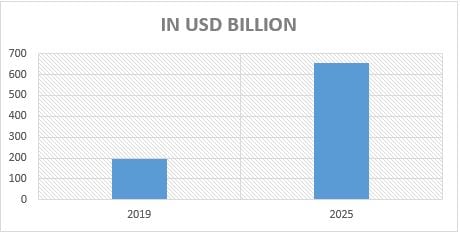 IoT market growth, is attributed to the increase in the adoption of the cloud platform, the increasing awareness for its benefits, and the need for more contained and connected solutions. The major areas that will see IoT-equipped services include building and home automation, smart energy and utilities, smart manufacturing, logistics, smart retail, and smart mobility and transportation. Other than this, many other sectors will adopt IoT and establish a healthy network. 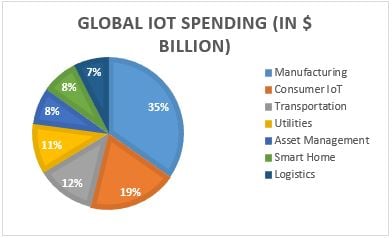 Figure 2: The following figure shows the global IoT spend in the various sectors. In this, manufacturing units own the major global spend followed by Consumer IT, Transportation, Utilities, Asset Management, Smart Home, and Logistics.

The segmentation of the IoT market includes regions like North America, Europe, the Asia Pacific region, MEA, and Latin America. The highest market size will be acquired by North America owing to the immense development taking place in this field. Furthermore, the nature of research in the region empowers more and more segments to adopt this novel technology and invest in their R&D segments. Other regions fuelling the growth of IoT in this region include rapid digitalization and increasing adoption of smart connected devices. 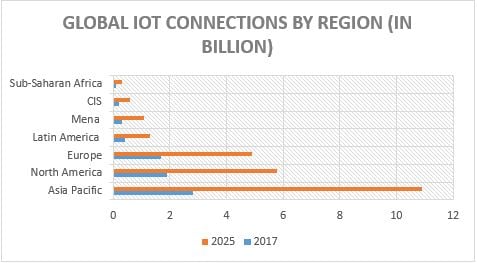 Figure 4: The following shows the Global IoT connection from 2017 to 2025. Furthermore, according to the FICCI report, it is said that global IoT Connections will increase from 7 billion in 2017 to 25 billion by 2025, at a CAGR of 17%, securing the future of IoT.

The Market Drivers for this Segment

Over the years, the prime focus of technological innovations has led us towards the revolution of wireless communication and connection. It has taken a wide jump from its hypothetical observations, to being readily applied in science and technology. IoT is modernizing and improving the connectivity all around the world, and it is not because people are exploring more, about how to recreate traditional cities into smart cities, but because it is the need of the hour as well. High-speed internet connectivity has improved the dynamics of the workforce. This is going to drive the market growth in the global IoT market. 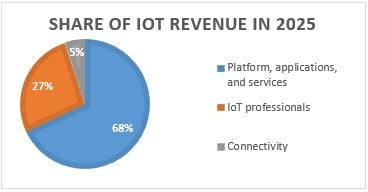 Figure 5: The following shows the share of the IoT revenue in 2025 for the future of IoT market analysis. Platforms, applications, and services include IoT layers such as cloud, data analytics, and security as well. IoT professional services include system integration, managed services, and consulting as well.

With the increasing adoption of IoT, more and more organizations are going to ask for security and privacy protection that doesn’t lead to data vulnerability issues. While cloud solutions offer a great prospect of data scalability, it does endanger your data security. Indeed, there is a need for IoT security and privacy protection, as some of the devices that use IoT suffer from limited memory, processing capacity, and lower battery power. These issues cannot be solved by traditional classic IT security mechanisms, and better IT privacy systems will be required. Also, the role of the IoT value chain will increase and open up more lucrative opportunities. This is how the future of IoT will be impacting by the global market.

Figure 6: The following are the market enablers for IoT (Internet of Things).

As per the NASSCOM report, the Indian landscape is going to a frontrunner in the IoT adoption in the Asia-Pacific region for better IoT market formulation.

Figure 7:The following shows the share of the IoT revenue industry-wise, by 2020. The total Indian IoT market size is evaluated to be USD 4.5 billion, by 2020. Others segment will include food technology, education, construction etc.

Furthermore, with the rise in the tech-savvy generation, the use of smartphones and its increased adoption, and better mobile internet penetration is what will drive customers to adopt more of IoT solutions.

5 Predictions Associated with the Future of IoT and its Growth

In the 19th century, only 4% of people knew about IoT. As for the 21st century, more than 20.8 billion people worldwide not only know about it but even are accustomed to its infinite advantages. Internet is the new skin of the world, and the upcoming IoT advancements will shape the future of humankind in close partnership with novel technologies.

The future of IoT is a series of predictions made by tech guru’s on how it is a technology that is going to rule the world in the coming time.

How IoT will Converge with Artificial Intelligence

The methodology of IoT involves the transfer of data over the network. However, over time, this creates a humongous amount of data, and organizations are unaware of how to manage this much data. And when this data is related to the customers and their personal information, it is very important to handle them in a very secure manner.

This is where Machine Learning, also known as Artificial Intelligence, can help organizations. Since with AI, computers can formulate programs without indulging in programming languages, they can be fed with such data, which will help them in understanding how to behave with data when they receive one, depending on parameters, like customer preference.

All IoT has to do, is allow the flow of data between the device and AI, and together, they can manage it without any human errors. This way, AI will help in fuelling the revolution of IoT and securing its future.

5G is the Propellant IoT needs

As for 5G, more and more countries are drawing initiatives to accelerate its adoption, in ten years, IoT will grow along with the increasing 5G network connections. Currently, 4G networks allow support of 5500-6000 NB-IoT devices on a single cell. With a much faster and better coverage, the 5G network will allow millions of devices to be handled by one cell. So, technically, 5G is the fuel IoT will need in the coming future.

Smart homes are a reality for the coming time, and with IoT, it will be more secure. The future of IoT predicts a stable home, free from any cyber criminals trying to steal your personal data. A home ecosystem consists of a smart TV, security cameras, door locks, added luxury, and comfort. However, it also makes your home prone to cyber-attacks. A router will help in securing the entry points of your home. It will, therefore, protect configurations like passwords and firewalls.

Weaponizing of IoT in Case of War and Attacks

Believe it or not, this is one of the applications that will be a part of the future of IoT. Botnet-powered distributed denial of service (DDoS) attacks have previously used unsecured IoT devices to shut down websites. However, in the future, attempts will be made to weaponize IoT to control smart devices and equipment in enemy countries.

Smart Cars will be a Reality

This will be one of the applications in the coming future. With the advent of 5G, the auto industry will see an inclination into driving the fastest gear. This will be, for sure, the future of the auto companies, with driverless cars and connected vehicles on road. The new cars will be connected to other IoT devices, which will act as the driving surface.

Industrial Segments Which Will be Revolutionized Due to IoT

Let’s see the industrial segments that will depict the future of IoT.

Customers have been using IoT for years now, in the banking sectors. ATMs, for example, are the top IoT devices, enabling customers to access cash without waiting in the long queues. Money has become digital, and in the coming years, more and more customers will demand applications that involve syncing all their accounts for ease. However, this action will also require a secure interface, and IoT will be the preferred option. The tech-savvy crowd will explore more of IoT options to make banking a comfortable experience for them.

The Design and Manufacturing Sectors

PCBs, are used in various parts ranging from mobile phones, printers, x-ray screens, gaming equipment, and every other electronic equipment. For the PCB designs, the designers usually share their work through PDFs and email threads. This, in the long run, disrupts the efficiency and productivity. With cloud-based applications, the team members can share their data easily and in a seamless manner. This will, improve the overall operational efficiency of the manufacturing process as well.

According to a report submitted by Forbes, approx. 161 million devices used in hospitals, clinics, and medical offices will include IoT applications to make the diagnosis of diseases and treatment more efficient and truer. Also, with the digitalization of medical records, more secure and reliable storage of patient data systems will be required that can easily counter cyber-attacks. IoT will, therefore, hold a strong hand over this segment as well.

IoT, is no longer only related to just big tech companies and MNCs, it has expanded its horizon to the banking process, design and manufacturing operations, the healthcare industry, and the establishment of smart cities. The IoT technology has restructured many assumptions about the management of increasing data in the coming years, how to analyse, and model it.

IoT has limitless potential when it comes to its application, and the impact it will cast on the future tech generations. As for the future of IoT, the rise of equipment that can administer IoT to them is bound to happen.