The Flux of Outsourcing: Jumping over Crossroads 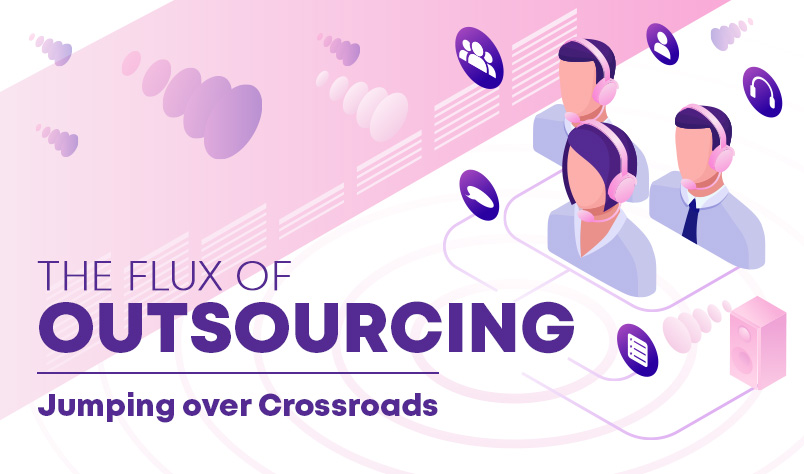 Ever seen the exalted Tom and Jerry Show? Remember how Jerry the mouse, despite every striven attempt from Tom to capture him, used to escape? It was because Jerry was perspicacious, wise, and did what was pertinent in the menacing situations created by Tom.

The lesson to be learned is: no matter how arduous and painful the environment turns out to be, you got to sit through and conform to the transition. That is exactly what the outsourcing industry has done with each transformation phase; it adapted and evolved.

Our world has been changing at a rapid pace in the last 100 years or so. Two World Wars showed us the true temperament of humans and what ugly potential violence has. But the two Wars have also neutralized tensions on a global scale, opening new doors for international trade.

Besides, technological significance increased at the speed of light in the last 80 years or so, particularly after World War II.

Technology has pervaded every business sector as the trade industry also witnessed a ferocious upsurge in the same epoch. Nevertheless, the coalescence of technology and business has been staggeringly accelerated by outsourcing.

Is progressive outsourcing a bad omen?

With digital marketing at its best pace and ultra-modern techs like AI, RPA, Cloud, Blockchain, etc., the outsourcing industry is faced with another transition in progress.

Experts are stating that due to technologies such as AI and RPA, there would be a massive loss of jobs. The eradication of offshore outsourcing and escalation of near-shore outsourcing was Trump’s election agenda to bring jobs back to America.

But are things really as they seem? Do you really think that digital and tech revamping will make millions jobless in the outsourcing sector?

IMHO, the technological avatar of outsourcing will not affect anything but our perceptions. The past has shown us that the outsourcing industry has gone through some disastrous scenarios where there were challenges and bottlenecks all over. But outsourcing has always proven fruitful for humans and down the pipeline, it will continue to do so, despite many disruptions.

In every epoch, outsourcing will not consume but create new and more jobs for humans. A walk through history will explicitly parade the trajectory of outsourcing throughout various transitional stages.

Outsourcing in the good old days!

Technology has advanced in the past, is still flowering, and will continue to do so, as far as human’s tendency to achieve the highest efficiency with least efforts will persist.

If we go by the books, history teaches us that whenever there is a technological revolution, the labor market experiences some rapid transitions, but not once has this transition diminished humans’ necessity.

For example, the invention of trains, airplanes, and other transport didn’t affect the number of people employed in transportation, it stretched the scope of travel altogether, creating new jobs.

In the same context, the enhancement of the internet and the rise of hi-end tech is not a threat to humans’ jobs. Reversely, this impeccable amalgamation of innovation and tech has empowered us with tools that help us execute our business operations with higher efficiency.

Business process outsourcing, since the time it was first implemented, was recognized by renowned economists as a viable approach to attain higher performance and cost savings.

What you see today is a modified version of international trade, the seed of which was sown 5 or 6 decades back.

It was the 1960s when outsourcing was first accepted in the USA. The inclination was to delegate the manufacturing requirements to nations with cheap labor rates. China, India, Malaysia, etc. were the preferred outsourcing destinations. But China got it all. Most of the manufacturing units of American corporates were handed to Chinese vendors.

However, the notion that says outsourcing swallows jobs wasn’t justified even then. Albeit the fact that corporates in the USA were delegating their manufacturing units, these businesses were utilizing more labor than usual. This happened because outsourcing trimmed the overall expense of organizations. This gave opportunities for business owners to utilize the saved capital to invest somewhere else and hire more labor.

The second wave of change came in the 1990s when American corporates started outsourcing their back-office business functions to Indian call centers. Again, there was a hullabaloo that thousands of people are going to end up jobless.

Did you know what happened?

The American corporate sector again witnessed a steep accession of jobs and businesses needed to streamline the US foreign affairs.

And the recent one, as discussed, is a technological drift pushed by a digital wave that is forcing the outsourcing sector to become more efficient.

Like the past, this transformation is productive, both for the people and the entire economy.

These are certainly exciting times. 50 years back you couldn’t have imagined the mannerism in which work is done today.

You can even get a job now with a sound internet connection and a computer only. With far-out reaching internet connectivity and affordable technology, experts in impoverished nations are able to earn bread & butter for themselves.

Simply said, online outsourcing means the delegation of business tasks to vendors via the internet. So, what’s the catch?

Online outsourcing as we know it has paved a secure way to work for the future. A majority of work will be done on the internet and buyers & sellers will seal the deal on technologically-backed daises.

The trend of hiring a full-time WFH (work from home) expert or remote employees will vanish and will be replaced by a global network of skilled professionals who will be available in accordance with business requirements.

So, this phase of transformational outsourcing will:

The next 5 or 10 years will witness an explosion in terms of the number of people on the internet. The BPO outsourcing industry, maintaining its track-record, will adapt and evolve through the current disruption.

This write-up is a mere attempt from our side to showcase the fluctuating business environment around the outsourcing sector and how it responds to the same.