Reshaping Mobile Apps: How Blockchain is the Next Big Thing for App Developers 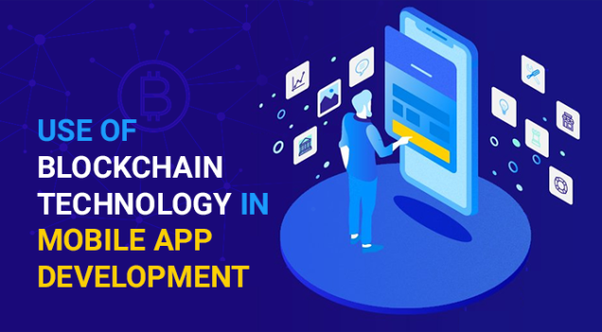 Technology and science are paving paths towards innovation.

With newer technologies being launched every other day, the inclination towards the adoption of such leading-edge engineering methodologies has been boosting all industrial segments. The current market scenario is such, if you need to stay in the competition, you need to pick up the new elements of technology.

With startups failing to implement them, mobile app experts are struggling to keep pace with so many techs at the same time, exploring the massive growth of the current industry seems like a needful task.

Over many years, blockchain has held its status as a revolutionary notion with positive aspects for not just one, but a wide spectrum of industries. This digital ledger system became popular during the times of cryptocurrency, and since then, been praised for its secure and reliable approach. Blockchain is packed with features like peer-to-peer payment architecture, decentralization, and security which makes it intriguing for developers. In the arenas of mobile apps, blockchain serves as a bountiful example, to build applications that are free from frauds, data leaks, and security threats.

Given the circumstances, blockchain is still a concept of developers, the practical applications of which, are in the initial stages of development. However, once understood, it holds an immense power to revolutionize the market. This game-changing technology is an important trend for the mobile app industry.

In simple terms, blockchain is a chain of blocks that stores digital information. Each block in a blockchain can store 1 MB of data.

It consists of three parts:

What is a hash?

It is a cryptographic code programmed by special algorithms. These codes are unique for every single transaction no matter how many times you have purchased from the same store.

How Does Blockchain Work?

A blockchain is a string of many blocks stored together. Every time a transaction occurs, it creates a new block and is stored in the digital ledger system. The following points state how blockchain works.

Does this Mean, Blockchain has a Public Infrastructure?

It is true, anyone can view the contents of the blockchain. In a blockchain, you can also connect your computers to the blockchain, as nodes. This way, every computer in the blockchain network receives a copy of every block whenever it is updated. It’s like your News Feed, when there is an update, you see the fresh content at the top.

So, when everyone can view each information, where does the security feature in blockchain come from?

In a blockchain network, there are millions of copies of the same block. This means each copy of the blockchain is identical. So, nobody can keep an account of so many events. If any hacker wants to even manipulate the data of any block, they will have to change every copy on the blockchain network. Also, since you do not have any knowledge of the users making the transactions, its data, to any hacker or user, is completely anonymous. Only those who hold details about the digital signature or the username can access the information in a block and understand it. So, you see, hacking and manipulation is something that cannot take place in a blockchain environment.

How is the World Reacting to the Blockchain Solutions?

To understand that, let’s look at some stats. 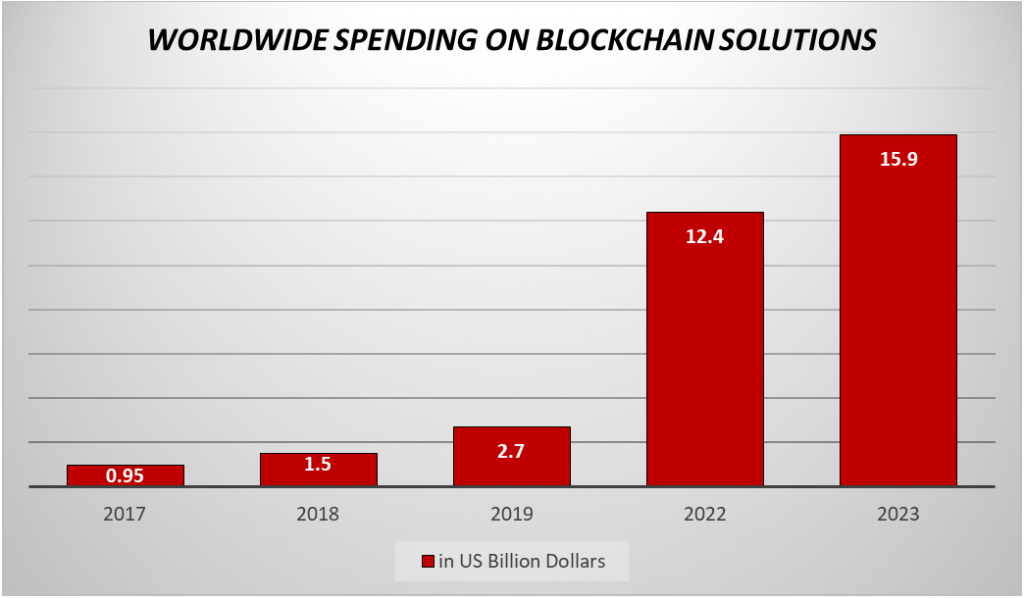 This data by Statista states the global spending on blockchain solutions. More and more businesses are investing in blockchain technology due to its decentralized nature across many devices. Features like data validation, data access, identity protection, security management, reliable approach make it an excellent payment portal even at inter-enterprise level.

Still, don’t know what the blockchain hype is all about?

With this said, blockchain’s amazing features make it one of the reasons why it is being implemented in the mobile app development arenas.

Why is Blockchain a Popular Concept for Mobile App Developers?

Blockchain was first mentioned in BitcoinTalk, the largest forum dedicated to Bitcoin. Many-a-times blockchain is said to provide a stable base for cryptocurrency operations. In the past few years, it has gained tremendous popularity, as a technology database.

But what invited its attention in the minds of the developers was its decentralized nature and secure access. Since then, blockchain has become an intriguing concept for developers. Surely, it does lead to transparency, but it reduces fraudulent transactions, and data tampering activities as well.

App developers are using this technology to make digital payments more accessible, easy, and secure. The nature of peer-to-peer transactions makes it a perfect fit for banking apps that needs such a type of technology.

Blockchain can Reshape the Future for Mobile App Developers

Blockchain provides an edge to all those people who like to indulge in digital payments instead of cash to cash transactions.

But why is blockchain said to be fit in today’s market scenario?

Because digital transformations are at its peak in the 21st century. Every business has a digital store, and more and more customers are accessing the online platforms, to indulge in day-to-day services as well. The digitally able world is providing the right momentum to blockchain technology and has pumped its need in the market. Blockchain is becoming increasingly popular for mobile payment apps due to its highly secured features.

But do you know the common types of blockchain-based mobile apps?

Now, that let’s look why blockchain is apt for mobile app developers.

Blockchain is known for its impervious security. Developers can use this tech, to create multiple protection layers into their data. The private keys to this data will be only assigned to the users, making it impossible for anyone without a decryption key, to manipulate the transaction details.

Since it is a decentralized system, it keeps a replica of each transaction on its computer network. This reduces the risk of data loss too. Since hackers will not have any knowledge about the user’s data and their private key too, no fraudulent or unauthorized activities can take place.

In a blockchain, the data about every transaction is visible to everyone. This means anyone can view the details in real-time. However, since the data is stored by digital names and signatures, it is anonymous to other people. They can view the transaction but will not know who made it (the real name and personal information). This way, nobody will be able to tamper the data in any particular block.

Blockchain stores all the data in public view. Therefore, if the user makes any manipulations to their data also, it won’t go unnoticed. Log for every change is made in this digital ledger system.

Introducing blockchain to mobile app serves one central motto, securing digital payments. Since more and more people are opting for contactless mobile payments, securing them with blockchain’s secure architecture seems to be a good idea. Many developers are focussing on coding a more secure and affordable mobile payments app.

Blockchain will help such developers in securing the infrastructure of similar mobile apps. Also, since thousands of nodes function, it is very unlikely that they will crash at the same time. This also reduces the downtime of such apps.

For managing any app, you need a password and login-id to authenticate your users. There is a lot of problems associated with using passwords. Anybody can track it and if you forget your password, getting a new one is a tedious task. With blockchain, users don’t need any password. The network of computers connected validates a transaction.

Also, since blockchain is built on cryptographic codes like a hash that uses a digital signature to unlock all the digital assets for the involved parties, authentication systems of such apps will become immutable, irrefutable, and incorruptible. This makes the process of accessing your resources, a seamless experience.

For every mobile app you use, you need a third-party mediator for it. In a blockchain, you do not need any party to complete the transaction. This improves the efficiency and the speed of transactions.

According to a report, blockchain-based transactions are 10 times faster than the bank ones.

In a blockchain, every transaction is approved by a computer. So, unlike a traditional bank that takes days to settle a transaction, blockchain can do it in 2-3 minutes.

In normal transactions that involve third-party apps, blockchain removes any such middlemen. Also, the intermediate parties charge per transaction that reaches completion using their portal. Blockchain doesn’t charge any such fee and still gets the transaction completed. The eviction of such mediators reduces the transactional costs for both, the business and the users.

The True Value of Blockchain for Developers

Blockchain technology is all about adding versatility to already existing framework and there is no better segment than mobile apps to earn profits and leverage in the market. Since blockchain is still a novel understanding for developers and businesses, taking advantage of this new trend will let organizations establish a staunch reputation in the market. With talented developers in the zone of constructing smart mobile apps, blockchain is going to be a trend worth reckoning.