8 Key Challenges to Be Addressed for Adoption of Blockchain 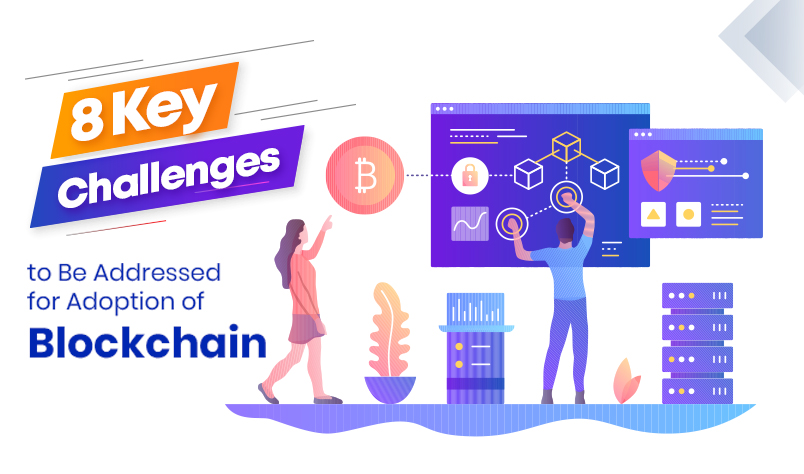 Blockchain is touted as one of the most revolutionary technologies of the current times. It has found applications in areas ranging from insurance and food supply chain to identity verification and cross-border transactions.

Blockchain technology has the potential to make transactions more secure and transparent and stakeholders more accountable. There are, however, a slew of challenges that need to be addressed before large-scale adoption of Blockchain is possible:

One of the key challenges in Blockchain implementation is its inability to scale. Networks like Bitcoin and Ethereum experience a slowing down of transactions and a consequent increase in the transaction fee as more users join the network.

Blockchain networks are slow. While Bitcoin Blockchain can process around 3 to 7 transactions per second, the corresponding figure for Ethereum Blockchain is not more than 15-20 transactions. This makes Blockchain unviable for large-scale applications.

On the contrary, legacy transaction systems such as Visa can handle around 24,000 transactions per second.

Given the stark contrast in processing speeds, the question is: Why would anyone ditch the traditional processing systems and adopt Blockchain?

Blockchains need to speed up in order to become viable for mass adoption.

Blockchain networks, be it Bitcoin or Ethereum, use Proof of Work mechanisms to validate transactions and add them to the network.

In a Blockchain, miners (who work to validate transactions) pick up a block of transactions and try to generate the right hash output for the block. This process relies on complex cryptography and solving of complex mathematical problems. As a result, a lot of electricity is needed to fuel the computers involved.

The Bitcoin ecosystem consumes approximately 0.2% of the global electricity currently. Going by the current rate, it is estimated that by 2020, Bitcoin users will use more electricity than the entire world uses today.

A report published in the Nature Climate Change describes Bitcoin as a ‘power-hungry cryptocurrency’ that can exacerbate global warming. The report elucidates,

“Although we are unable to predict the fate of Bitcoin, our analysis suggests that if its rate of adoption follows broadly used technologies, it could create an electricity demand capable of producing enough emissions to exceed 2 °C of global warming in just a few decades.”

In fact, Ethereum co-founder Vitalik Buterin plans to switch from Proof of Work to Proof of Stake mechanism.

Proof of Stake is considered to be faster and wouldn’t require as much computational power. But the implementation of Proof of Stake has its own set of hurdles and isn’t coming anytime soon.

With so many platforms present in the Blockchain space, there is currently no standard that allows them to interact with each other.

There are thousands of active Blockchain projects today running on different platforms. Each of these platforms has its own coding language, set of protocols and consensus mechanism. It is difficult for the platforms to interact with each other without a translator.

Organizations are working to develop a standard version of the Blockchain to improve cross-platform collaboration.

Since its early days, Blockchain has been known to be associated with criminal activities. As transactions on the Blockchain are untraceable, criminals have exploited cryptocurrencies for all kinds of shady dealings.

Cybercriminals have been known to sell drugs, weapons and several banned items conveniently and anonymously using Bitcoin. Bitcoin has been extensively used in money laundering and ransom ware payment.

Terrorist organizations have been known to campaign for Bitcoin funding on social media platforms.

To make Bitcoin (and Blockchain) acceptable to the masses, this criminal association has to go.

Figure 3: Public Blockchains raise some key privacy concerns that need to be addressed.

All public Blockchains (not private) are open electronic ledgers where all the transactions are visible to all the servers. While this feature may be beneficial where transparency is desirable, it can become a liability in environments that have stringent privacy requirements.

For example, the medical records of a patient cannot be made public under any circumstance. Same goes for government data.

As most of the applications in any industry entail a certain degree of privacy, public Blockchains need to be modified to restrict access to authorized personnel only.

All the public Blockchains are vulnerable to 51% attack.

All the transactions happening on the Blockchain have to be validated by the majority of miners present in the network. If any miner or group of miners gains control of 51% of the nodes on the network, they can prevent other miners from creating new blocks and hinder the validation of new transactions. They can even reverse the transactions confirmed by them.

The possibility of this attack, however, decreases as more miners join the Blockchain network.

Any Blockchain network needs computers with a high degree of computational power. So, Blockchain technology does not come cheap. Large-scale implementation of Blockchain will involve its integration with legacy systems which is expensive. This will discourage corporations and governments from adopting Blockchain.

With increasing popularity, cryptocurrencies have begun to face regulatory pressure from governments. This regulation has assumed different forms. For instance, Bitcoin has been outright banned in several countries like Algeria, Morocco, Pakistan and Iran. Then, countries like the USA, Canada and Australia have maintained an overall friendly stance towards Bitcoin while taking measures to ensure it is not being used for illegal purposes.

If Blockchain networks are not regulated, it can lead to issues like scams and market manipulation. In fact, many experts attribute the Bitcoin boom of late 2017 to collusion between cryptocurrency exchanges.

Now, even if the government tries to regulate Blockchains, there are issues. For example, What if the Blockchains comply with regulations today but fail tomorrow? No one will be able to update them as Blockchains are immutable. Immutability of Blockchains makes their regulation difficult.

Blockchain has been considered as the technology of the future. However, its large-scale implementation involves an array of serious challenges that need to be addressed. And that is not going to happen anytime soon.

What are your views on the Blockchain technology? Let us know in the comment section below.

Good Work Yaar! You have clearly explained the challenges of Blockchain Adoption in a Straight forward way. As you said that It has found applications in insurance and food supply chain to identity verification, Blockchain technology has already started to transform many major 19 industries.

Hey, Parul Singh! Well-written article. I will share this information with my colleagues who are all learning about this technology. You have mentioned clearly about the challenges needs to be addressed for adopting blockchain technology. Thanks! for the informative ones.