Blockchain: A Game-Changer for the Entertainment Industry 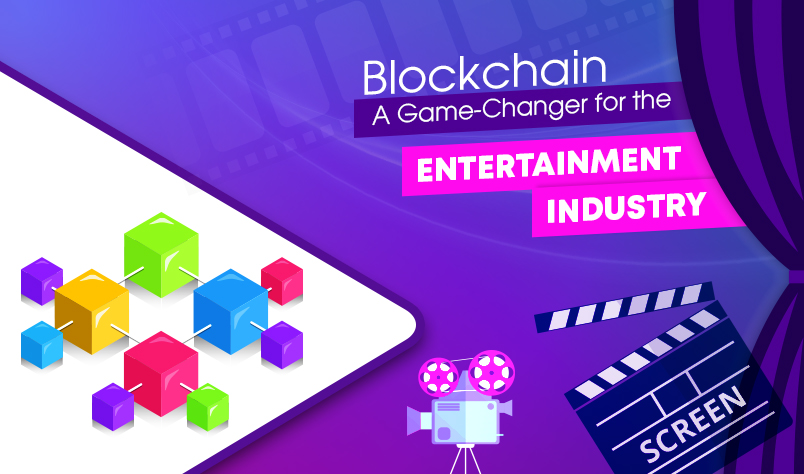 Blockchain has created a buzz everywhere. Even tinsel town seems to have embraced it. The Hollywood romantic comedy No Postage Necessary released last June may have been filmed like any other movie, but was distributed through a peer-to-peer video network app Vevue. Vevue runs on a Blockchain network, Qtum. The film was also available for purchase through cryptocurrencies.

No Postage Necessary is allegedly the first film in history to be distributed through Blockchain technology. The move has been hailed as nothing short of a revolution.

Jeremy Culver, who has directed the film, appears to be an advocate of the technology. Culver explains,

“There are many advantages to Blockchain distribution, including immutable proof of intellectual property rights, transparent royalty payments, and, since all data on the blockchain is resistant to duplication, we can now envision a world where films are no longer pirated.”

Another name worth a mention is Trust Machine: The Story of Blockchain, a documentary released in October 2018 that focusses on the evolution of cryptocurrency, Blockchain and its role in solving world problems like poverty and income inequality.

Directed by actor-turned-filmmaker Alex Winter, Trust Machine is the first Blockchain-funded, Blockchain-distributed, and Blockchain-focused documentary ever. It has been produced by SingularDTV (rebranded as Breaker), a Blockchain entertainment company that aims to use the technology to transform the way content is produced and distributed in the industry.

Piracy has been one of the key issues plaguing the entertainment industry. Though losses from piracy are not quantifiable, it is obvious that the industry loses billions every year because of illegal streaming and downloading of films.

The problem is particularly significant for new and independent filmmakers who do not have the financial backing of major studios and seek financing to produce a film. Given the high fixed cost involved in producing a quality film, a filmmaker stands to lose if illegal versions of his work are available for free. This loss trickles down to actors and behind-the-scenes workers who lose significantly on royalties and other benefits.

To give you an estimate of the damage done by piracy, the Hollywood blockbuster Expendables 3 lost close to $100 million dollars because of piracy (according to a conservative estimate).

Read: The 10 Most Pirated Movies

While Blockchain does not offer a magic bullet to eradicate piracy, it can certainly help. Using Blockchain, an immutable record of transactions related to any creative work (e.g. a plot, a screenplay or a logo) can be created and any illegal sharing can be tracked.

Vevue, the Blockchain-powered video streaming service mentioned above, is trying to develop a technology labelled as surveillance smart contract to track the life-cycle of any content. If a person tries to illegally share the content tracked by their technology, Vevue will be able to identify the owner of the device where the content was last played.

It is important to remember that Blockchain does not track the content here; it simply provides a platform to securely record and share content. The tracking process is too complex to be handled by Blockchain.

Another important example in this regard is CustosTech. CustosTech is a South American company that is using Bitcoin Blockchain to combat the illegal distribution of copyrighted content. CustosTech has developed a forensic watermarking technique through which a watermark (a unique serial number) is embedded either at random points or throughout the length of the copyrighted content. This watermark can be used to track the recipient of the content. The way this watermark is embedded, it is difficult to remove it.

CustosTech uses Bitcoins to incentivize an average content consumer to search for content that has been illegally shared. It runs a bounty hunter program which anyone can join by applying on their website. In this program, the user (or bounty hunter) deploys a tool to screen the content protected by CustosTech.

Blockchain for Copyright and Ownership protection

Copyright and ownership establishment and protection is a complex and expensive task for the entertainment industry. People creating original, high-quality content often have to pay huge sums in litigations following a copyright infringement. Many times, the original content creator goes unacknowledged.

Blockchain can tackle the problem by creating an immutable record of transactions related to any creative asset, a script for instance. The creator of this asset (e.g. a scriptwriter) can record the copy on the Blockchain network and register for copyright protection. If the rights of the script are transferred to another party, say a production house, a new transaction will be created and stored on the Blockchain network. By creating a transaction history of any creative asset, Blockchain can help trace the rightful owner.

OPUS, a music streaming platform powered by Ethereum Blockchain, is an important example in this regard. OPUS allows users to stream music tracks composed by different artists. Blockchain tracks the analytics of streams and accordingly distributes the revenue to the artists in real-time. Of the total revenue generated from streaming, 97-99% goes to the artists while the rest is used to cover operational expenses.

Traditionally big budget films in Hollywood have been financed solely by large production houses. Moviecoin, a financial technology company intends to change this.

Moviecoin has developed a Blockchain platform running on Ethereum and plans to issue digital tokens that can be used by consumers for financing films, buying movie tickets and getting concessions. The platform will allow individual investors to hold a stake in big budget films.

The platform will bring more transparency in film making as all the transactions will be recorded on the Blockchain. All the stakeholders associated with the film will be able to keep a track of the money going in and out.

Moviecoin is owned by Christopher Woodrow, producer of some highly acclaimed Hollywood films like Hacksaw Ridge and Birdman.

Blockchain powered application DECENT provides filmmakers with a content distribution platform where they can upload their work as a file and choose a price that users need to pay to access their work.

The file gets encrypted and uploaded on the network. Anyone who wants to download the file can pay through digital tokens and download and decrypt the file and watch the content. This allows small, independent filmmakers to reach the audience in far-off regions and eliminates the need for a middleman.

Blockchain for creating a decentralized crew

SingularDTV, a New-York based Blockchain entertainment company, has developed an application Rentalist that allows filmmakers to connect with and recruit production professionals in the city they are shooting in. This eliminates the need for middlemen and allows more people to compete for work.

These professionals record their work on the Blockchain network and are paid automatically through smart contracts once the project is finished. Rentalist thus allows filmmakers to trace who has worked on what and pay crew members on time.

What are your views on Blockchain technology being used in films? Please share in the comment section below. In case you want to read more about Blockchain, click here.