5G vs 4G: Is India Ready for a Network Evolution? 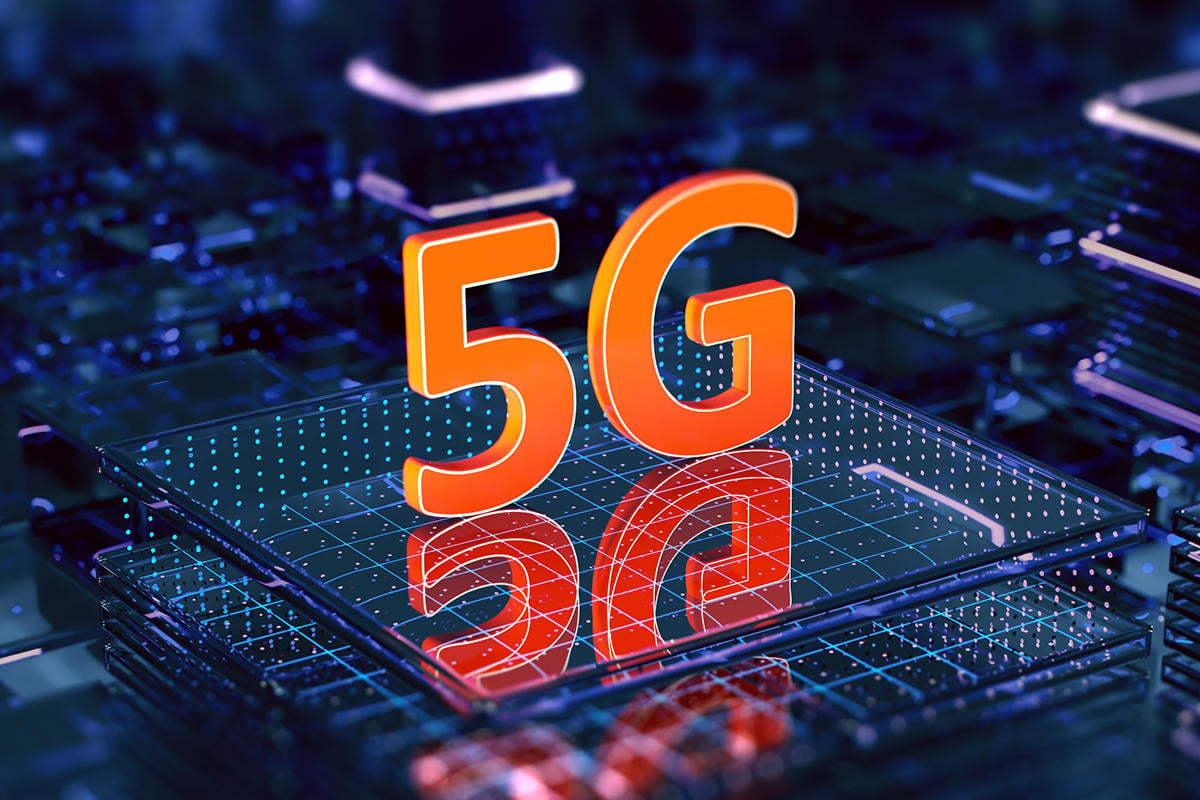 5G is a common buzzword these days, thanks to the print media creating awareness about the turbo speed of the upcoming network. The battle between 5G vs 4G is what telecom operators have been talking about lately. With the Indian government announcing 2020 to be a 5G-powered year, many companies are in the queue to launch the fifth generation of mobile communication technology in India.

The Telecom Regulatory Authority of India (TRAI) is setting up a high-level forum to draw the roadmap for the launch of 5G network in India. The launch of this technology will make wireless communication speedy up to 10,000 Mbps in cities and 1,000 Mbps in villages. 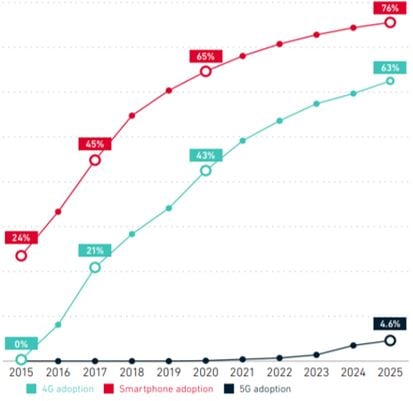 Furthermore, the Global Telecom Industry, GSMA, predicts India to have 920 million unique mobile subscribers by 2025. Out of the humongous number, only 88 million connections will be of the 5G network. Moreover, India will be responsible for generating a quarter of the world’s new mobile subscribers throughout 2017-2025.

Is the Indian Market Ready for the Transition from 4G to 5G?

Figure 2: The following figure shows the key milestones achieved in the mobile market of India. Mobiles have been a key fuel to the social and economic transformation for India, since 1995. The telecom sector has employed elements that have, in time, acted as the catalysts of the rapid growth of mobile data, paving a way for a digital economy of the country.

Smartphones, in India, have given birth to a digital economy. They are already playing a central role in deciding the future of many businesses in the country. The new generation of mobile-savvy customers allows mobile companies to realize the true potential of this newly found segment and how to use it for their benefits. With National Digital Communications Policy (NDCP) running campaigns like ‘Connect India’, ‘Propel India’, and ‘Secure India’, challenges related to the 5G network in India need to be discussed and specific investments in this field need to be addressed.

India has a giant pool of global mobile customers in the market, with more than 750 million unique users at the end of 2018 and the number proliferating to a higher CAGR rate. According to the GSMA Intelligence report, India will hold 1/4th of the global mobile subscribers in the world over the period to 2025. Furthermore, the market will see a rapid migration from 4G-capable devices and smartphones to the 5G network.

Figure 3: India is leaping very fast to be the world’s second-largest smartphone market. Furthermore, India will strengthen its place as the world’s second-largest smartphone market, after China, by 2025. China will have almost 1458 smartphone connections by 2025 and India will have 983 connections, following the former in the race. The other countries leading the mobile trail will include Indonesia, the US, Brazil, Russia, Japan, Pakistan, Nigeria, and Bangladesh.

Much of the reason for this prospect is the booming population of India and China and the need for more mobile connections. India already has a highly engaging digital audience consuming all sorts of digital media, services, and content. With the government initiatives to strengthen the hold of 5G network in India, its presence in the digital commerce will be highly profound.

However, to achieve the high status of being a 5G-equipped country, three things are required; investment in the digital infrastructure, the source of which has to be private companies, a digital environment facilitating this adoption, and a modern version of the policy and regulatory framework to be in place. Although the Indian government is talking a lot about shaping a 5G India, are they ready for such high investment, when reputed mobile companies are withdrawing from the Indian mobile market? 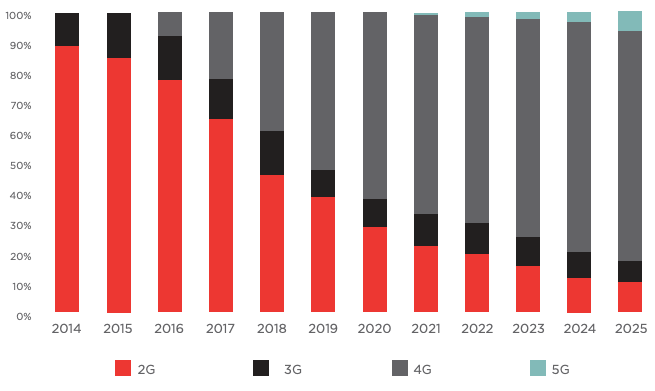 Figure 4: The following shows the transition of the Indian market from 2G, 3G, and 4G to 5G, by 2025. This shows a decline in the number of 2G connections. Furthermore, the Indian telecom sector will not accept the 5G network, until 2025, owing to the presence of reliable infrastructure and affordability. Also, from 2020 till 2025, 4G connections will be highly adopted by smartphone users.

Although the Indian mobile piazza is ready to walk on the roads to 5G connectivity, is the Indian government keeping the unique nature of the telecom infrastructure in mind and trying to address the challenges faced by the mobile market of the country?

The question that remains prevalent, still is that the country is not ready for the sustainable footing of a telecom makeover. Furthermore, India is not in its financial capacity to make the necessary investment required for a complete transition to a 5G network. This fact is indeed recognized by the Department of Telecommunications  (DoT) and the Telecom Regulatory Authority of India (TRAI). 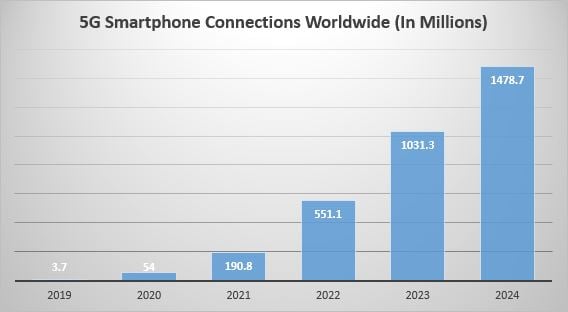 Figure 5: The following is the growth in the 5G smartphone connections worldwide, from 2019-2024. The buzz of 5G has picked up pace only now. The most dominating regions will be the US and East Asia, owing to the rapid increase in the population and the availability of 5G infrastructure. As for India, the market will start developing in 2020 and will grow in numbers from 2025. Until then, only a small percentage of the market will adapt to 5G power and connectivity.

How Well do the Telecom Operations Understand the Prospect of a 5G Network in India?

With the Vodafone-Idea merger enduring their biggest loss of INR 50,921 crores in the quarterly hour, Airtel losing INR 23,044 crores, how well will the India telecom operators work through the 5G wave?

Before the government starts talking about how fruitful 5G deployment in India is going to be, it is important to note whether the Indian operators ready for the 5G model. The entrance of Jio in the market has affected the telecom industry as a whole. With Jio’s drumbeat of cheap launch offers and tariffs, the Indian audience swept clean of the other telecom operators, switching over to Jio. This annihilation caused by Jio was just the start. It resulted in the ARPU (average revenue per user) drop leading to the consolidation of the entire telecom market.

The result of it, Jio became the only telecom operator boasting a profit of INR 990 crore in the Q2 2019 financial results, where other telecom operators like Airtel and Vodafone-Idea were compacting on ways to survive through this huge loss in the market.

While Jio was able to handle this squandering loss due to its rich parent company, Reliance, Airtel and Vodafone-Idea were not able to handle this price drop. This resulted in Vodafone-Idea deciding to backtrack its way from the Indian market. While the existence of established telecom operators in the Indian telecom market is threatened, it seems that thinking about 5G deployment is going to be a futile effort.

At present, Reliance Jio is the only profitable telecom operator in the market. It claims that it is ready for the 5G ecosystem in the country, and has a network backhaul in place. However, it has voiced its concerns regarding the prices of the 5G spectrum entailed by the TRAI.

Bharti Airtel, on the other hand, has said that is cannot afford such exorbitant prices and hopes that the government brings them down. The spokesperson also informed that any telco will have to shell out INR 50,000 to INR 55,000 crores for 100 MHz despite knowing that no returns can be incurred in the coming three years.

Vodafone-Idea merger is the worst hit in the market. It has a debt of more than INR 1 lakh crore, and it feels that they cannot invest in the 5G technology in India.

Where Does the TRAI Stand in the Context of the 5G Network in India?

TRAI said that it will launch 5G in India in 2020. It released a paper talking about the architecture of the 5G network, policies, the framework, and the challenges of the industry as well. The paper listed 3 key frequency ranges:

Amongst them, 3.5 GHz is named the 5G spectrum around the globe. The DoT is yet to auction the 5G services in India. This means that for telecoms to sell their 5G services in India, they will have to buy the spectrum, and this is where the entire problem starts. The telecom operators market, which is already liquated, suffering through huge losses and high debts, will not be able to spend money on buying a 5G spectrum in India.

The recommended 5G base price costs INR 492 crores for a minimum of 20 MHz blocks. This means that a telecom company will have to spend around INR 10,000 crore for 20 MHz. This price is released by the TRAI when the Indian telecom market is already under high debt, and they cannot expect a return for such a setup in the next 5 years.

5G vs 4G: The Immense 5G Opportunities in India 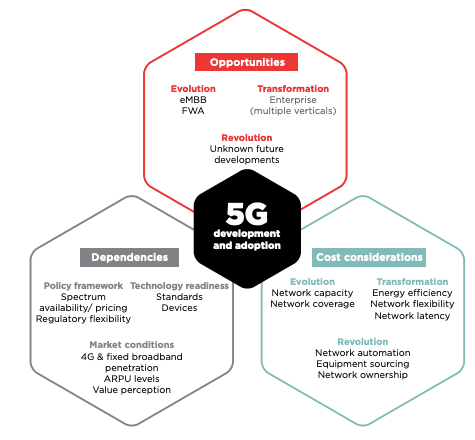 Figure 6: The world indeed belongs to the 5G network. However, for creating such opportunities, telecom industries need to understand various factors. For an effective 5G network to run, you need a supportive policy framework, operator access, necessary infrastructure, and widespread availability of 5G services. Whereas mobile telecom industries might look into the 5G adoption and creating such products, making customers access such services, through the operators is an important task.

What is 5G? Why it is better than 4G? What makes the 5G vs 4G battle so important? The answer to this question lies in your knowledge of mobile technology. 5G services offer better speed and coverage than 4G networks. It can be described as an advancement in mobile networks, a necessary need of this digital-equipped generation, revolutionizing industries, and consumer experiences. They offer network flexibility which is very much like the need of the hour. Much like the transformations in technology, mobile networks also age and advance. However, such networks require the installation of towers, operators to work on modern techs, newer models of ownership, and network management approaches. The only case in which the 5G network in India can work is when the right raw materials are provided.

Operators will have to improve their understanding of IoT to expand their enterprise revenues in such fields. Many of the IoT networks are stabilized for 4G networks usage, however, if properly enhanced, they offer better quality service.

So, When will the 5G Network in India be Available?

This question doesn’t have any right answer. Because people are still not clear about what 5G vs 4G is all about, and which one is better. With 4G network penetration in the country still accelerating, and the fact that the Indian telecom operators have endured humongous losses, 5G network in India availability doesn’t look like a good picture in the upcoming years.

5G in India might knock the Indian mobile user audiences a little bit later, in 2025, however, one true thing is that the age of low tariffs and affordable local packs are gone. All the telecom operators are now increasing their mobile tariffs by 50%. Such huge changes in price will help the telecom sector to earn some revenue from the market, and maybe bring users closer to the reality of a 5G network in India.