Is Artificial Intelligence a Pinch-Hitter for Writers? 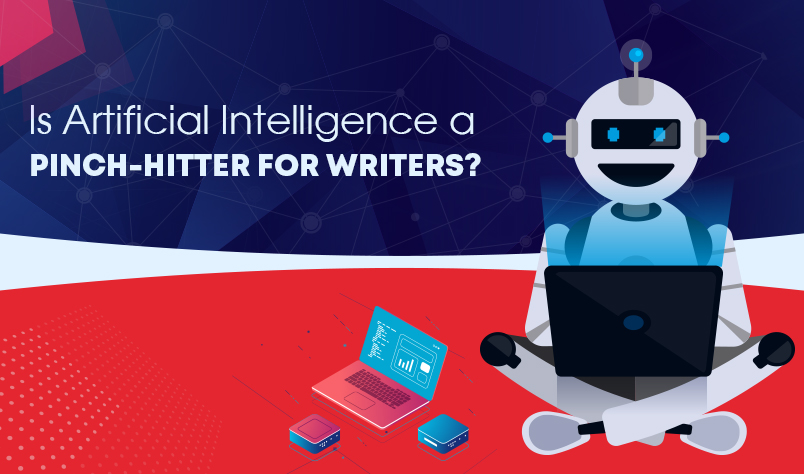 The term ‘Artificial Intelligence’ sounds ruminative as it always resurrects the fictional hunch of “domination of machines over humans” in the coming future.

When the brightest minds of the 20th century started working on artificial intelligence, the focus was to develop human-like intellect and sense in machines.

However, AI is still in its evolution process.

As far as applications of artificial intelligence are concerned, this technology has already imprinted its utility in various sectors.

But can AI implement creative tasks too?

No doubt AI is able to collect colossal data from customers, online platforms, and information available on different forums.

The question is, can AI use tons of data to articulate a blog, article, or similar content?

Jotting down a high-quality write-up is a step-by-step process that involves topic selection, research, title creation, keywords extraction, setting up the structure, regulating the tone, and finally, drafting a proofread think piece.

So, Artificial Intelligence, which is eventually nothing but math at its crux, is a research field, where new advancements are made every now and then.

The base of AI is machine learning (ML) technology whose algorithm is known to scrutinize a cluster of data, spot trends, and consequently offer forecasts about collected information, depending on the analysis.

Pick up your smartphone and type a message on Whatsapp or any messenger.

You can see that as you type a couple of letters, your smartphone grabs the patterns and then guesses which words generally come after.

I know this can’t be set side by side with what we are discussing here. Anticipating the next word is not as same as writing. Still, being a writer, deep inside you know that these suggestions may come handy.

But AI isn’t always right and that can be clearly seen in the afore-mentioned example itself.

How many times does the autocorrect feature annoy you? You want to write something and the tool brings out something else.

For instance, if you want to write ‘I like this’, the autocorrect feature pops up ‘I love you’ as a suggestion.

This clearly shows that albeit AI is picking up the suggestion based on the highest probability of phrase, it ain’t right!

Even the Whatsapp chat shows the words or phrases you use most despite you want to use it or not.

So, AI is quite advanced and useful but it still needs some alterations.

How can a machine write a Harry Potter book then?

AI has scribbled down a Harry Potter Fan Fiction in the year 2017 and the entire writer community was biting its nails.

As a writer, it is quite understandably concerning.

But before you fret more, understand how a machine learning model is able to jot down an entire book.

AI, which runs on machine learning technology, can develop content but it requires a colossal set of information from where it can anticipate and learn.

So, when I say AI has written a book of the famous Harry Potter series, the machine learning model collected and studied the data available on the web.

The algorithm of machine learning technology is such that it tracks other words with respect to particular topics. However, the book was not produced without any human intervention.

To give structure and suitable tone to the words generated by AI, a team of writers was allocated to edit and arrange the content.

So, will AI ever be able to write like a human?

It can, that’s for sure. However, we aren’t there yet.

AI and the writing skill

Every writer has his/her own set of challenges while jotting down a write-up. Some may find it tedious to conceptualize while others may find the final proofreading part boring.

If you ask me, one of the most arduous tasks is to recall pre-set, brainstormed, conventions for a particular user context.

Here, the notion of artificial intelligence offering suggestions to ease the misery of writers seems like a befitting application.

So, AI can put up the suggestions and you as a writer can choose which phrase or word suits the context perfectly.

This ultra-modern tech can surely pace up the overall articulation process.

But the capability of machine learning technology to grab and analyze information depends on humans to first jot down such write-ups.

Simply put, you need to decide the objective of write up, the target audience, most apparent literature, and the most subtle language.

Until you are decided on these aspects, it becomes impossible for AI to write down anything. So, AI cannot replace humans until we want it.

Writers can pass on some of the trivial and repetitive tasks however, it is impossible for this technology to create something totally new.

Only humans can be imaginative to a limitless possibility.

You ask Google (which is also a perfect example of AI) about the best topics to write on. But you cannot expect Google to give a revolutionary idea that has never been talked or thought of before.

The proficiency of artificial intelligence in writing depends on the humungous base of information available on the internet that is put up by humans eventually.

AI can surely be a booster for writers but it cannot be a substitute for them.

How AI and Writing can go hand-in-hand?

Just like the microwave in your kitchen is able to set up the right time and temperature to heat up or prepare some dishes, which saves you the trouble of doing it on your own, saving a lot of your time and effort – in the similar context, AI helps writers by providing the facility to select the content from data strings.

There can be multiple phrases and words, which means you can test different scenarios for your content.

Without AI, this is typically done by researching manually from the data on the web, which is undoubtedly, too tedious.

So, using AI-backed tools to prepare write-ups is definitely a spectacular way to speed up the process, but the need for human writers remain inevitable.

How AI benefits you as a writer?

When the extraneous portion of your writing process is handled by AI, this gives you extra time and space to elevate your creativity and push your writing to an apex level.

So, all the skepticism around ‘AI is going to replace writers’ is just an assumption filled with fears and no truth.

Applications of artificial intelligence can actually offer more space and time to you as a writer that you can use to polish your creativity, imaginativeness, and articulation.

So, technology is here to provide you that little push but ultimately you are the one that drives the road.

For more updates on AI, stay tuned. Thanks!