How Big Data Has Transformed the Election Scenario in India 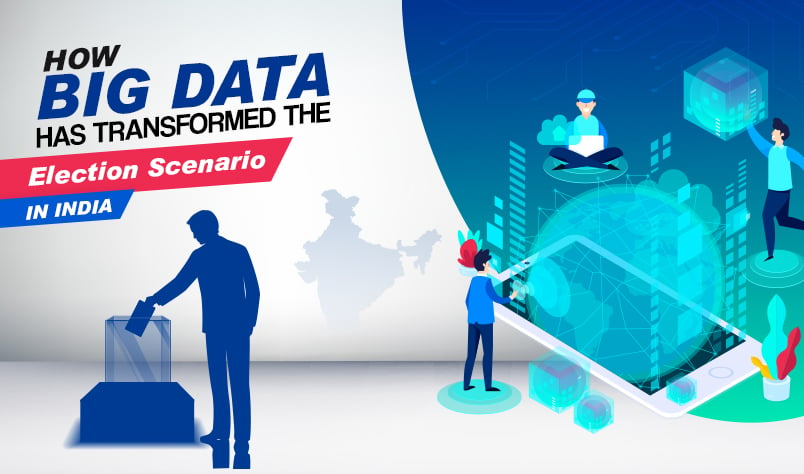 The General Elections 2019 are finally here.

Indian political parties are leaving no stone unturned in wooing the voters.

Political parties have become technology-savvy. Most of them have taken the digital route to reach the masses.

In 2014 general elections, we saw how the BJP deployed digital channels to woo the electorate and gained a sweeping mandate. The party invested a lot of money and manpower on data-driven technologies during the run up to the 2014 elections.

Perplexed by BJP’s triumph in 2014 and the subsequent assembly polls, the Indian National Congress has woken up to realize the indispensability of technology in election campaigns.

Congress President Rahul Gandhi is analyzing figures on vote share, seats and changing vote patterns since 2009 collated by the party’s data analytics department in an attempt to thwart the Modi juggernaut.

The data analytics department headed by Wharton alumnus Praveen Chakravarty has mined data of all by-polls, assembly polls and general elections held since 2009.

The Congress has also launched a Big Data empowered digital platform, dubbed as Project Shakti. The project aims to link every Congress worker with party president Rahul Gandhi and has met with considerable success.

How have Indian political parties benefited from Big Data?

Given the demographically complex electorate India has, it has become imperative for all political parties, national or regional, to bank on Big Data to devise their election strategy. Use of Big Data solutions provides several benefits:

Before the advent of technology in India, all the political parties had a blanket message to be broadcast to the entire voter base, irrespective of their age, location, caste, creed, or political affiliation.

Times have changed. Big Data solutions and sophisticated analytical tools have empowered the political bigwigs to target every voter at micro-level.

Today all the major political parties in India have a dedicated analytics department.

There are digital channels to capture all the relevant details about any potential voter such as their age, caste, religion, location, education, professional background, past political affiliations, political and religious views.

Social media platforms, in particular, provide access to posts, tweets, likes, shares, comments belonging to any individual account. Political parties have dedicated analytics teams that analyze the data of millions of such accounts to gauge the mood of voters. They can tailor their political message accordingly.

There are teams that carry out sentiment analysis on Twitter by crawling tweets from hashtags of parties, party leaders, and news channels.

Using Natural Language Processing, all the words in a tweet are assigned a mood label (joy, sadness, dominance, neutral, anger, fear, faith, etc.) and mood of the entire tweet is decided accordingly. Complex ML algorithms are used to rate these tweets on a scale of -1 to +1, where -1 indicates a negative mood and +1 a positive mood. Through these complex techniques, parties can assess the overall mood of Twitter users on any trending political issue.

Every election sees a generation of first-time voters who are mostly indecisive about the party they are going to vote for. These young minds are relatively easy to mould.

Then, there are moderates in every community which can be easily swayed into making a decision. Big Data solutions can help parties micro-target such ‘fence-sitters’ to vote for them. Parties can also focus on their traditional vote banks to ensure they cast their vote on the polling day.

Parties can analyze past voting patterns and make future predictions

Predictive modelling has made it possible for parties to analyze past voting patterns and predict future results.

The predictive models are used to predict the results up to the booth level. These models can also provide age-wise or community-wise break-up for votes in each constituency.

These predictions enable parties to optimize their campaigning efforts. They can divert man-power, money and other resources where there are more chances of getting favorable results.

Parties can understand issues faced by the electorate

Social media channels like Facebook or Twitter have empowered individuals to express their disapproval with respect to any issue that troubles them. People can register complaints and provide suggestions on government websites and apps.

Big Data solutions are deployed to collate and analyze this data and thus understand the key issues faced by the electorate in any constituency, state or region.

While issues like unemployment, education, infrastructure development are common to most of the constituencies, others may be endemic to certain constituencies. e.g.  If a constituency has a majority of rural voters, agrarian distress could be a key issue.

When a candidate is well aware of the problems faced by the voters, he can create a message that resonates with the majority of the audience.

Parties can make better choices when it comes to candidate selection

Selecting the right candidate is crucial to gaining an upper hand in elections. When choosing a candidate for a particular seat, parties opt for the candidate who is most likely to win.

In India, most of the candidates in parliamentary and assembly elections are just renominated. Selection (or renomination) of any candidate is affected by certain key factors such as his moveable wealth (for financing campaigns), pending serious criminal cases against him (for assessing his organizational capacity) and whether he has a post-graduate degree (for assessing his capability to work once he is elected).

These models calculate the probability of selection of any candidate as a function of his pending serious criminal cases, moveable asset wealth, level of education, political party, and home state.

Parties can effectively manage their workers

Big Data can provide a platform where all party workers interact with each other and with key party leaders.

An important instance is Project Shakti launched by the Congress in July 2018.

Project Shakti is a digital platform empowered by Big Data that aims to link every Congress worker with the party president Rahul Gandhi.

The Congress leadership can communicate directly with party workers in any booth or district and poll them on any decision the party wants to take.

Praveen Chakravarty, Chairman of the party’s data analytics department is bullish about success of the project.

While Big Data can be a game-changer, it cannot be always relied upon.

The Indian electorate is huge and complex and too many factors come into play during elections. Besides, parties try to lure the voters using liquor, cash and other incentives.

We are 850 million voters. Any party wanting to get a clear picture of the populace would have to ensure that the data collected for analysis is sufficient, updated on a regular basis and undergoes unbiased analysis.

Gained a lot of information after going through this post

Nice information shared here for trending and best-featured election management Software system. It will provide best impact on the overall business concept. Must read this article it will help to understand your needs. Thanks to Author to share this Article.