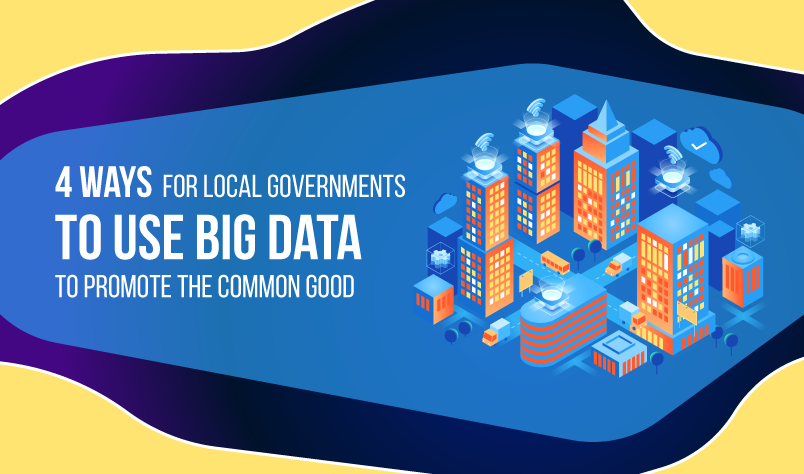 Big data has become an indispensable component of success in the business world. According to the recent research, the number of companies using big data has dramatically increased from just 17% in 2015 to 53% in 2017. In 2018, 97% of companies indicated that they were investing in big data and AI. However, big data is not only a revenue driver for businesses, it’s also a promoter of the common good and a helper in city management. We have found four big data use cases that may help to find solutions to city issues.

Rodent control divisions in New York, Washington, D.C., and Chicago have already started the collaboration with data scientists to shift from a reactive approach to city sanitation to a proactive one. The local governments wanted to prevent rat outbreaks instead of spending the budget on coping with their consequences. However, to get accurate predictions about the locations where rat infestations were about to happen, the rodent control divisions needed more data than the available information about previous 311 residents’ calls related to rat complaints. They also required new ways to analyze data – and here’s where big data came to help.

Data scientists considered multiple factors that might influence rat dispersing, for example, sanitation violations, the number of restaurants and cafes in the area, human density indication, as well as rats’ behavioral patterns, and incorporated them in the predictive models. Trained on the historical data, these models consider these factors and look for dependencies to depict the city locations where an outbreak is likely to occur, a week an advance. As to the results of these initiatives, the predictive model used in Chicago is found to be 20% more effective compared to the traditional reactive approach.

Public safety organizations use big data and predictive analytics to reduce crime. They apply risk terrain modeling to identify the correlations between the specific city locations and criminal activity. By combining geographical data with past crime incidents, the model creates a city map that depicts the hotspots with a high probability of such criminal activities as shooting and robberies. Besides, the model associates these hotspots with certain street objects (for example, parks, banks, supermarkets).

The police use these predictions to plan their shifts and efficiently allocate their officers. According to the research, risk terrain modeling helped to decrease robbery by 42%, gun violence – by 35%, and motor vehicle theft – by 33%. In Glendale, Colorado Springs, and Newark, the police could reduce crime by more than 30% by focusing on between 1% and 5% of each city.

While IoT sensors are sources of big data, we couldn’t but mention IoT solutions in our overview as they are widely applied by cities striving to create a more comfortable environment for their dwellers. Sensors can be embedded anywhere – in the ground, on the road surface, on a street lamp, in a waste container. Some IoT solutions are quite basic: they follow predefined rules – for example, they turn on a sprinkler in the park when the moisture level reaches a certain threshold. Other solutions are more sophisticated. For example, weather-based irrigation controllers react to humidity, temperature and wind changes. In addition to that, they analyze how these and other factors, such as soil and plant types, influence the plant’s need for water and adjusts the timing of irrigation to avoid over-watering.

The range of IoT use cases for smart cities includes but is not limited to:

Preventing the gaps in the labor market

The Australian government is working with LinkedIn to identify the labor market trends such as emerging jobs and skills that certain job roles should possess. These insights will help to create the programs aimed to develop the required skills and competencies, thus eliminating possible future skill gaps in the workforce.

LinkedIn carried out a comprehensive analysis of the Australians’ work experience. They looked at the 5-year evolvement of their Australian members’ profiles and analyzed the members’ career paths. Besides, they clustered millions of job titles and compared the status quo in 2013 and in 2017. Thus, they defined the job titles that have become more frequently used during the five-year period. LinkedIn has also identified the skills that a certain job function required. For example, an emerging data scientist job requires the knowledge of machine learning, analytics, data mining, SAS, and big data.

Though it’s a definite example for the national government, we hope to see more examples of this kind on a local government level.

To sum it up

Big data technologies can contribute to making the city environment healthier, safer and more comfortable in different ways – from preventing rat infestations to road traffic management based on CO2 emissions. As big data turns beneficial in various aspects of city residents’ lives, we expect to hear more about governmental big data initiatives in the nearest future.

Alex Bekker is the Head of Data Analytics Department at ScienceSoft, an IT consulting and software development company headquartered in McKinney, Texas. Combining 20+ years of expertise in delivering data analytics solutions with 10+ years in project management, Alex has been leading both business intelligence and big data projects, as well as helping companies embrace the advantages that data science and machine learning can bring. Among his largest projects are: big data analytics revealing media consumption patterns in 10+ countries, private labels product analysis for 18,500+ manufacturers, BI for 200 healthcare centers.