Is AI a Blessing or Curse in Disguise for Mankind? 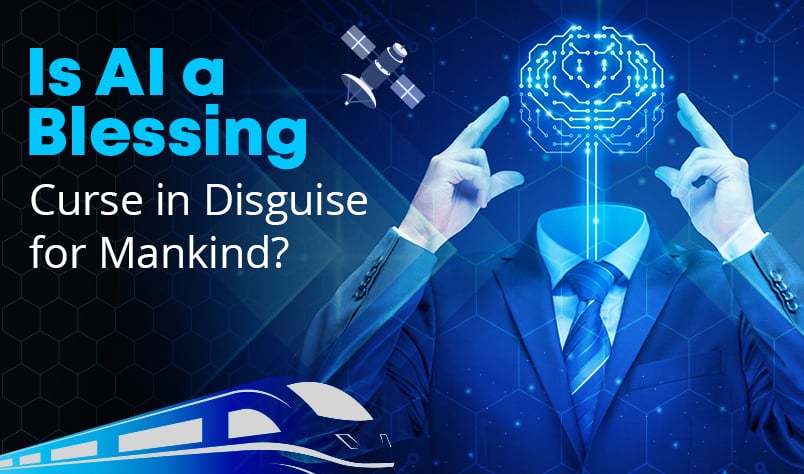 “The rise of powerful AI will be either the best, or the worst thing, ever to happen to humanity.”

At the present time, science and technology has reached a whole new level, as all those things are possible these days which humans hadn’t thought of even a century ago.

Put simply, we are living in a technology-driven world.

When it comes to the brightest emerging technologies, artificial intelligence is the one name, which is likely to be called out.

Well, this ever-augmenting tech has narrowed down the gap between humans and machines. Applications of AI have the potential to imitate human-level intelligence. Surprising, huh!

So, applications of artificial intelligence are going to benefit humankind. Or, is there a catch?

Let’s find out together:

The thing that differentiates humans and machines is ‘Accuracy levels.’ We, i.e. humans, often make mistakes unknowingly, which cost us later.

However, this is not the case with AI-powered machines as they ensure a greater degree of precision, once accurate data gets provided to them.

Needless to say, when there is a negligible margin of errors, high productivity levels are likely to be on the cards with AI.

2. Positive impact on the medical field

In this modern world, the healthcare industry is enjoying great benefits after bringing applications of artificial intelligence into use.

By means of AI, doctors not only check health risks to perfection but also learn about the side effects of various medicines.

Want to know more? Read this — Is Artificial Intelligence Really a Helping Hand for the Healthcare Industry?

Like it or not, humans strive to come up with better technology only for their own sake; it means we just want that technology which makes our life easier. That’s what AI is doing nowadays.

We can access desired information from the internet by simply giving voice commands. All this happens because of AI-powered voice assistants like Siri, Cortana, Alexa etc.

Another advantage of artificial intelligence is traveling issues are reduced to a great extent. Now, we can go for tension-free long drives, as GPS is almost always there to help.

Barring this, you can click perfect pictures due to facial recognition technology based on AI, do highly-secured banking, enjoy seamless online shopping, etc.

1. Comes with a hefty price tag

We may have the above listed advantages of artificial intelligence in the pipeline. But it is imperative to know that AI-driven applications feast on a big chunk of money to offer their most salient perks.

The major reason behind AI’s hefty price tag is its complex algorithms. Plus, the cost of repair and maintenance of machines powered by artificial intelligence is also very high.

With time, the price of AI-powered machines is coming down, though it is still hard for businesses with tight margins or low initial capital to bring applications of artificial intelligence into operations.

Even MNCs may have to think twice as the cost of AI-driven applications, depending on the scope of the project, could snowball.

Taken as an investment, businesses can forget about the huge initial cost of AI-based applications, but will they be okay with the unnecessary hassle? No, of course!

The factor that acts as a double-edged sword for artificial intelligence is that it acts properly only in those environments for which it is programmed.

This means AI-based applicants cannot make a decision in an unfamiliar situation, which is highly unacceptable. Unlike humans, in a nutshell, AI cannot improvise according to the current scenario.

‘Do applications of artificial intelligence cause unemployment?’ could be a good topic for debate.

It is because some people say it’s just a myth, while some believe AI creates new jobs. No offense, AI has been creating new jobs since its introduction, but indirectly it has been causing unemployment too.

How? Well, AI-based machines are replacing humans from where repetitive tasks are supposed to be done perfectly. To put it briefly, AI-driven applications are a threat for those people who are doing labor-intensive tasks or working at non-managerial positions.

According to a report by Gartner, AI would create 500,000 jobs in the United States. However, 900,000 net jobs would be lost only because of artificial intelligence.

Phew! It was some rollercoaster ride, wasn’t it?

However, the question still remains: ‘Is AI a blessing or curse in disguise for mankind?’

Well, every coin has two sides, so there’s no point in ruling out the prominence of artificial intelligence due to some disadvantages.

All that matters is how you perceive things. Hence, artificial intelligence could be boon or bane for the human race.

However, a fact worth mentioning is that AI improves with time, thus there is a likelihood it can conquer all its demerits in the near future.

So, it wouldn’t be wrong to say that applications of artificial intelligence would be more effective than they are currently.

Thanks for staying connected with us till the end!