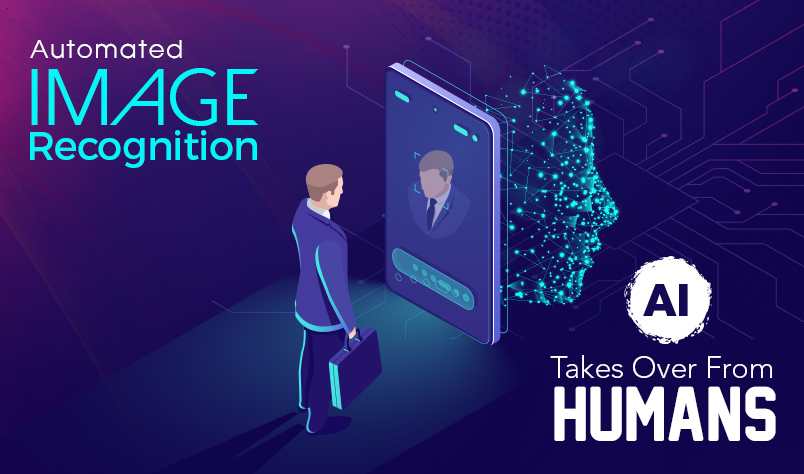 “Albert Einstein once said: “The significant problems we have cannot be solved at the same level of thinking with which we created them”, but in today’s changing technology-driven realm, the answer to such problems is achievable with Artificial intelligence. “

Automated Image recognition is looked upon as the branch of Artificial Intelligence heading the foremost digital trends nowadays.

Bearing in mind today’s scenario, wherein Artificial Intelligence can currently identify faces with 97.5% accuracy, it is actually faster than any another conventional technology. As for all animals, so for humans facial recognition has evolved widely over time. Considering an example of learning visual identification and using it, chess players who learn playing chess from a young age learn configuration patterns and choices available on the board. With the powers of pattern detection and recognition, they can defeat less worthy opponents.

Automated Image recognition: We are at the beginning of a digitalized world!

Automated Image recognition by computers actually clicks a person’s picture and creates a 3D-model with the features noticeable in a more prominent manner. With this technology, pictures taken from different angles and poses are recorded for future use in facial recognition.

With the prominence of deep learning in Artificial intelligence, all aspects of Automated Image recognition align well with the requirements of the industry, all thanks to “Neural networks”- a framework for handling different machine learning algorithms and figuring out information inputs together.

Facebook’s neural network has 20 million connections, with a stored library of 4.4 million visible faces, and increasing every moment. The larger the data set stored in reference, the better it is for Automated Image recognition!

With the payment system backed by automatic face recognition features, it conjointly adapts the shoppers into paying and exiting rapidly.

Guest identity is verified at the building through automatic face recognition, which grants access to a digital identity card, and provides access to services like breakfast vouchers easily. Guests also can order room service, regulate things like air-conditioning, curtains and lighting, and make payments via facial recognition.

Stephen Hawking said to the BBC, “The development of full artificial intelligence could spell the end of the human race”! That day is still far off, we think. AI image recognition is being used in helpful ways, like Microsoft’s Earth Lens which uses Artificial intelligence to find objects in satellite pictures.

Among the most recent inventions of Microsoft, it leverages Artificial intelligence to pinpoint features in satellite imaging. Earth Lens — a brand new iPad app, launched in open source — identifies, tracks, and analyzes objects in photos taken from miles high off the planet’s surface.

Extracting insights from representational data is a stylish process that manages the delays as well as the decision-making method across the critical things.  With an ardent algorithm figuring out thousands of satellite pictures, reverse search in Artificial Intelligence has made a significant mark.

With the help of satellite data and far-reaching AI vision, it assists disaster relief and environmental conservation efforts quite well, putting off Dr. Hawking’s grave predictions for another era, thankfully.