3 Major Disadvantages of IoT You Must Beware Of! 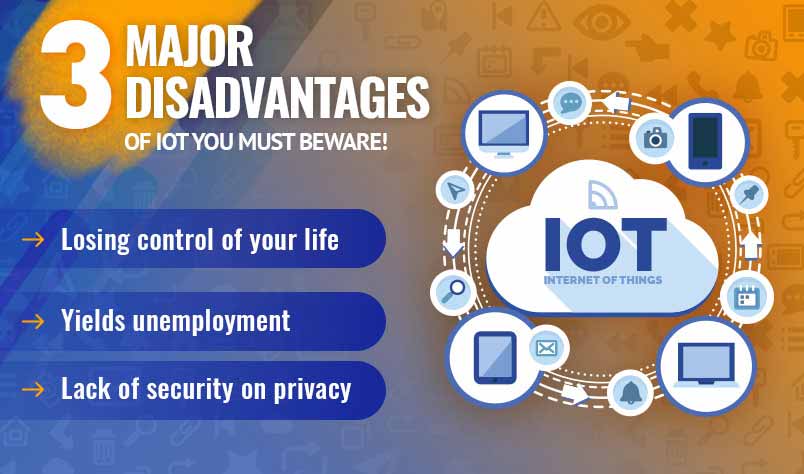 Recently, my interest shifted from applications of artificial intelligence to IoT (internet of things). After gaining knowledge as to how we’re interacting with chatbots disguised as customer service agents and how AI revolutionizes modern living., I wanted to do the same with IoT. You can call me a technophile or something like that, but getting in-depth with new technology is what I am passionate about. 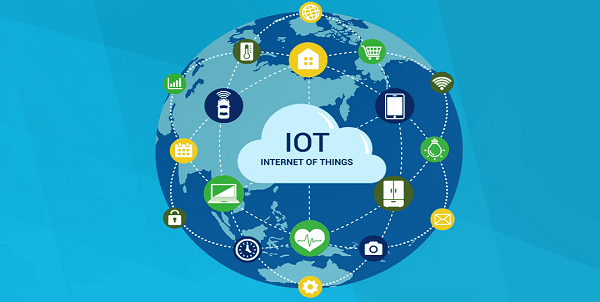 These days, IoT has become the talk of the town, because it is making our life easier. If you have a smart device like a smartphone and a good internet connection, you can do several things by putting in negligible effort. For instance, you can know about restaurants near your location by giving voice commands to Google Assistant or Apple’s Siri. It goes way beyond chatbot services and AI-tools commanding our way of life.

Here are some scenarios that may sound like fiction, but are possible with IoT. So, have a look:

There are many other amazing scenarios, which are possible with IoT.

But as we know, nothing is perfect in this world, thus, there is no chance that IoT has no disadvantage, similar to AI-bots AKA chatbots.

” IoT is removing mundane repetitive tasks or creating things that just weren’t possible before, enabling more people to do more rewarding tasks and leaving the machines to do the repetitive jobs.” 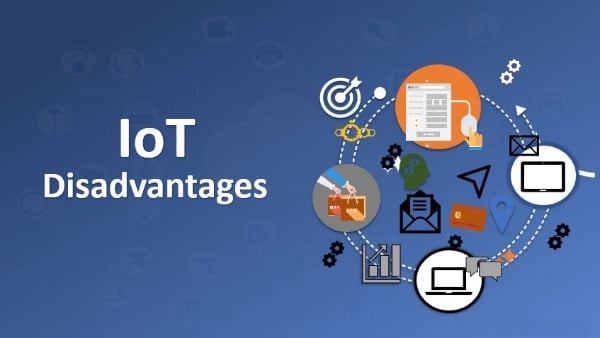 1. Losing control of your life

The major disadvantage you can experience with IoT (internet of things) is losing control of your life. There is no denying that we are very much dependent on today’s technology. From investing in chatbot services to reduce human workload to technology performing small tasks with minimal efforts., it indirectly tells that we are getting handicapped with every new advancement in technology.

By all means, IoT devices are making our life easier, but have you ever thought of what they take in exchange? Still guessing? Well, IoT enabled devices share personal data over the internet, which can be tracked with ease.

From daily routine work to future plans, IoT devices know everything. Therefore, they will keep telling you what you should do and what you shouldn’t. It gives a feeling of being a slave, doesn’t it?

There is a word synonymous to a pill, which is bitter in taste but benefits us in several ways: ‘Limit’. We must limit ourselves while using IoT devices for the sake of averting a life controlled by technology.

Read Also: How Does AI Help Hollywood Attain Success At The Box Office?

Well, if technology offers us something, it takes something back on a large scale us well, albeit we often don’t realize that.

The disadvantage that both AI and IoT share is yielding unemployment. These technologies take away mundane jobs, which is nothing less than trouble for less educated or low-income level people. Companies, who’ve invested in chatbot services, don’t need employees 24*7 to converse with customers. And it only results in unemployment of the less-educated sector.

According to the latest industry reports, 50% of tasks we do at home can be done through automation within the next 10 years.

For developing countries like India, where lack of entrepreneurship and unemployment is big trouble, IoT can make things more difficult.

Surely, IoT devices give an amazing experience to their users, but security concerns have always revolved around the internet of things. To bring about the desired results, IoT devices first share data over the internet, a place where you will always find hackers in large numbers.

A data breach of any level can disturb the personal life of an individual to an extreme level. To prevent the leakage of data, IoT devices must do information sharing with top-notch encryption. This would definitely take some time to happen.

Another factor that also raises questions with regard to reliability is increased complexity. IoT is a complex and diverse network, which means glitches in applications or failure of an IoT infrastructure can happen. And this can result in serious consequences.

It may not be noticed, but IoT is becoming a part of everyone’s life. The involvement of this tech force is just going to increase. In my previous write-ups, I talked about the internet of things in a positive manner.

But this time I have lifted the curtain on the disadvantages of IoT. Obviously, creating a chaotic situation wasn’t the intention, actually, I just wanted to make my readers understand IoT in and out.

Of course, IoT cannot be written off because of some disadvantages, as we will reach nowhere if there is a fear of demerits. By virtue of this write-up, I just tried to shed some light on how much the internet of things can be trusted in the current scenario.